Pay off the mortgage or invest? 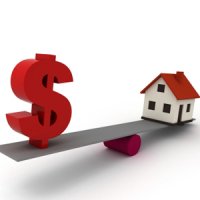 When interest rates are high or rising, a tricky question for private investors comes to the fore: “Should I pay off my mortgage or invest?”

Most of the time, paying off the mortgage is a compelling option. But low mortgage rates such as we saw in 2009 and 2010 – coupled with the stock market buying opportunity of a lifetime – turned conventional wisdom on its head.

Borrowing to invest is usually a bad idea. Mortgage debt is the cheapest and safest debt available to private investors, but even then there’s still a good case for paying off your mortgage early before investing. I’ll get to why in a moment.

However, when you can get a ten-year fixed mortgage rate charging less than 5% – and you still can, as I write – then the decision is not so clear cut.

And remember, 10% a year is the average nominal return from UK equities. In the first half of 2009, the odds of superior returns (i.e. >10%) over the medium term looked pretty good. As I wrote in May 2009, a decade of 20% a year returns seemed possible, given the huge slump in shares we’d seen.

It was a profitable call, and a great time to invest: In the two years since the March 2009 lows, the UK FTSE 100 has risen around 70%. Emerging markets have done even better. So if you bought shares with the money you saved through lower mortgage payments, then you deserve applause – or your own hedge fund!

But were the many who have instead been paying off their mortgages in record numbers all chumps?

Not a bit of it. There are powerful reasons why paying off your mortgage early is never a bad idea, even if in hindsight you could have made more money elsewhere by being bolder.

So let’s look at the pros and cons, to help with your decision.

If you’ve got any credit card debt, store card debt, personal loans, or similar – anything at all except a student loan or a mortgage – then you should get out of that debt first.

The interest rates on these debts typically range between 9-29%. The risk vs reward ratio of trying to grow your money at a higher rate than you’re paying in interest on this expensive debt is abysmal.

You should also have an emergency fund in place before you start investing or making over-payments on your mortgage,  in case you need cash in a hurry. (An alternative is to use a flexible offset mortgage, but the rates on these are often higher).

If you can pay off your mortgage early, you’re potentially in a great place financially. There is no law of smart investing that says you should do anything riskier than getting rid of the mortgage first. Many people would kill to pay off their mortgage early.

In fact, the 6% you ‘earn’ from paying off a mortgage is much better than earning 6% from savings. That’s because outside of an ISA or pension you’ll be taxed on the 6% from savings, reducing your returns. But by paying off a 6% mortgage debt, you’re getting the whole 6% on your money.

Besides being tax efficient, paying off a mortgage early dramatically shortens the years you’ll spend in debt. For example, let’s say you borrow £200,000 at a rate of 6% over 25 years.

Now, I’m ignoring various things here, like the time value of money – £211 today is worth a lot more than it will be in 25 years time. But the same would be true if you invested it in cash or a tracker fund, instead of spending it now.

Paying off a mortgage early is a great middle-class aspiration, and for good reason. Being debt-free is mentally liberating. You’ll find wealthy people who’ll tell you it’s madness to pay off your mortgage, but they invariably have massive assets elsewhere. For the average office wage slave, being free of the mortgage is nirvana – I’ve never met a single soul who regretted paying it off.

More reasons to murder your mortgage

Seriously, you can be too clever in life. Paying off the mortgage early is hard to beat.

Invest instead: Risk and reward

There’s only really one reason why you would choose to invest instead of making overpayments on your mortgage, and that’s because you hope it will leave you richer!

We’ve seen you’ll need to make an average net return of at least your mortgage rate for investing to be more profitable than paying off your mortgage. Generally, that will mean investing in risky assets – possibly corporate bonds or preference shares, but most likely shares.

Shares are very volatile, which means your investment will fluctuate in value. You’ll need to have the stomach to tough out bear markets, where your shares may halve in value or more – over the average 25-year life of a mortgage, you’re certain to see two or three stock market scares.

This is in sharp contrast to paying off your mortgage early, where the return on the reduction in debt is guaranteed.

Note: House prices are volatile but your mortgage isn’t. That’s why paying off your mortgage is so attractive. It’s irrelevant if your house fluctuates in value when it comes to the returns you’ll make – the same fluctuations would happen if you ran the mortgage and invested in shares instead. Reducing the debt is the guaranteed return.

To have any chance of beating the return on paying off your mortgage, you’ll need to keep investing steadily through stock market turbulence, and you’ll need to keep costs low. Regularly investing into index funds, perhaps tilted more aggressively towards emerging markets and small caps in the early years when your time horizon is the longest, will be the best approach for most.

Remember, there’s no guarantee you’ll do better by investing. But historical market returns suggest that over a long period like 25 years, you’d be very unlucky to lose out, provided you invest regularly in equities and stick with it through the tough times.

Also note that if shares do very well for a decade, say, you might want to rethink your strategy and start paying off your mortgage instead, rather than push your luck in what might by then be a stock market bubble.

You wouldn’t have to sell out of your equities – instead you could simply direct your fresh savings towards paying down the mortgage.

More reasons to run a mortgage and invest

Personally, while interest rates are low I’d run a (manageable, affordable!) mortgage and invest in equities, at least for as long as I judged shares looked good value. I’d possibly even consider using an interest-only mortgage to do so, which really ramps up the risk factor.

But that will not be the right decision for a lot of people, so do weigh up the pros and cons of paying off the mortgage instead.

It partly comes down to taxes

This generally means you’ll need to invest in ISAs or a pension to shield your investment from taxes.

Of course, most employed people take out a home loan while investing in a pension all their working life – whether they realise it or not, they’re partly funding their pension via the mortgage debt, as we’ve discussed above. And it makes a lot of sense to do so, since both mortgages and pensions are long-term commitments.

For those who don’t like pensions or who are locking away enough in them already, ISAs are a great alternative. If you earn enough to have the choice, then filling up your annual ISA allowance and using any extra spare cash to overpay on your mortgage could be an ideal compromise.

Note that everything I’ve written above is in the context of historically low interest rates. If mortgage rates rise to 8-10%, for instance, then making over-payments becomes far more attractive than investing (assuming we’re not in some period of hyperinflation at the time).

Previous post: How we rebalance the Slow and Steady portfolio