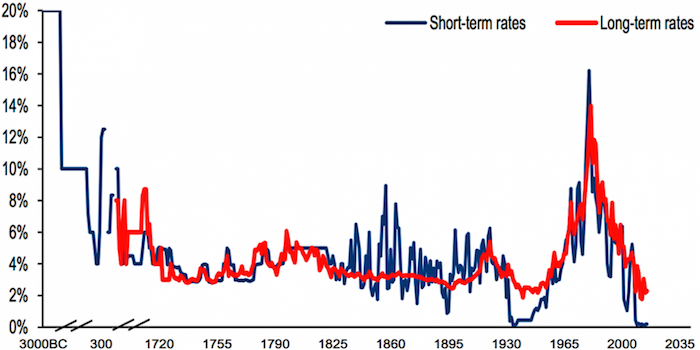 Even the ancient Mesopotamians didn’t enjoy the low interest rates we see today.

That graph was devised by Andy Haldane, chief economist at the Bank of England, and circulated in October 2015. Since then both the red and blue lines have dived even closer towards (or in some countries below) the 0% flat line.

Such extremely low interest rates across the developed world are due to a number of factors, most directly the near-zero benchmark rates set by central banks.

In August the Bank of England cut its Bank Rate to just 0.25% in response to the UK’s vote to Brexit. An unimaginably low rate got even lower.

Central bank policy plays a huge role in setting wider interest rates by influencing what’s called the yield curve – strictly a representation of the yield you’ll get for holding bonds of lengthening maturities, but often applied to the returns from other asset classes, too.

You can see a central bank’s influence in the lower interest rates on mortgages, savings bonds, and even Santander’s popular 1-2-3 account that followed in the days and weeks after the Bank of England’s cut.

But the Bank of England had its reasons for further cutting rates, of course, and for having held its rate so low for so long in the first place.

And these reasons give us a clue as to some of the fundamental drivers of today’s very low interest rates.

This is not a Phd thesis on rates, so I will have to be necessarily brief.

Indeed I am writing this article at the request of a few readers who have asked for a super-straightforward summary of the problems potentially caused by low interest rates.

I don’t want to go off into the weeds!

So with a bird’s eye view, other factors that influence the market interest rates that we as consumers and businesses see (and that feedback into the benchmark rate-setting of central banks) include the state of the economy, inflation and deflation, currency moves, what other countries’ central banks are doing, demographics, and – I’d argue – the emotional state of savers, borrowers, and investors, and the impact of such emotions on asset prices.

There are also more contemporary or controversial causes of low interest rates. These might currently include globalization pulling down wages worldwide and boosting the supply of global savings, or the rise of robot workers. However these factors still manifest themselves as, say, deflation or as low government bond yields.

In fact all these factors interact with each other.

For instance, the economy may take a hit, confidence falter, the stock market plunge, and demand by borrowers for credit slump. A central bank might then cut interest rates to try to stimulate the economy by making money cheaper, and so encourage more borrowing.

Similarly, when the economy is very strong, investors are going crazy, borrowing is at all-time highs, and the central bank fears excess demand could provoke inflation, it might raise its benchmark rate to try to dampen all those factors.

By raising and lowering interest rates like this, the central bank is aiming to dampen the extremes of the economic cycle.

A key thing to remember though is that central banks do not set market interest rates; rather their own reference rate and any associated monetary operations influence market rates, and are influenced by them.

So how do we square those dynamics with today’s economic picture?

Bank Rate in the UK is at an all-time low, yet few would say the economy is the worst it’s ever been, or investors at their most depressed.

Well readers, that is the $10 trillion question.

People have been arguing about near-zero interest rates ever since the financial crisis ushered them in for the UK, the US, and Europe (with Japan having had very low interest rates long before then).

Central banks initially slashed rates in direct response to the value destruction of the financial crisis, which wiped trillions off asset prices and caused a surge in unemployment and fearfulness that threatened to submerge the world in an economic depression.

Supporters of the extremely low interest rate strategy – and its bedfellow, quantitative easing – claim lackluster economic growth and the absence of high inflation since the near-zero rate era began shows that continuing with such low rates has been appropriate, that things would have been much worse without them, and that fears of an inflationary spiral have proven groundless.

Firstly, they say inflation has been caused by low interest rates, only it’s shown up in asset prices rather than in shopping baskets, with the price of everything from bonds, shares, and property to art and collectibles soaring.

Secondly, they argue a broader inflationary shock has been stored up for the future. It’s like shaking a ketchup bottle, where nothing comes for ages and then it all splurges out at once. Just wait, they say.

Thirdly, many contend near-zero interest rates may have become part of the problem, rather than the solution.

The theory here is that because there’s little penalty now for being a poorly run and indebted business – because you can limp along thanks to cheap financing – low interest rates may be gumming up efficiency and productivity growth, and inhibiting the creative destruction that enables superior companies to grow at the expense of their weaker rivals.

In addition, we might ask what kind of a signal do super low interest rates really send?

If your doctor told you after a heart operation that you needed to trundle around with a bleeping heart monitor next to you all day, you may well feel more nervous – even if the pattern of bleeping suggested you were actually returning to health.

Perhaps something similar is happening in our minds due to seeing low interest rates for years on end? We’re told things are improving, but maybe we’re skeptical because of the low rates themselves, and so we don’t borrow and spend as much as theory would predict.

If that’s true then low rates could actually be dampening the economy rather than helping spark it into life.

There are other potential downsides to very low interest rates, such as if they encourage people to chase higher returns through unsuitable investments.

But then that is partly what central banks are trying to achieve – by trying to get crisis-scarred savers out of cash and into more productive assets, others out of bonds and into equities, and so on.

To an extent it’s not a flaw so much as a feature.

These debates have been swirling for years in the business media and among sophisticated investors.

For example, CNBC’s recent Delivering Alpha conference was pretty much a procession of hedge fund managers saying a bond and equity crash was imminent because of all the problems caused by low interest rates.

Such comments are also voiced beneath almost any article we publish on Monevator that’s to do with bonds or cash.

And newsletters and rent-a-doomster media pundits have been warning of an imminent market implosion or inflationary shock for years.

I understand where such sentiments come from. The rally that has sent the yields on trillions of dollars worth of government bonds into value-destroying negative territory is hard to square with good financial governance, or even a nodding acquaintance with economic reality.

Yet you have to remember most such warnings have proven wide of the mark for years.

In reality, inflation has stayed low, bond and equity prices have continued to rise, and the UK and US economies have grown and seen unemployment steadily fall (albeit with little in the way of wage or productivity growth).

Yet in spite of such progress, many hedge funds have delivered lousy returns since the financial crisis. One reason is they were too timid because of their disquiet at the low interest rate policy of central banks.

I’m not immune to this. While I spend much of my time warning passive investors in our comments not to suddenly start thinking they’re fortune tellers and dumping all their bonds and whatnot, I’ve had my own hunches.

I thought quantitative easing would cause inflation, and so far it hasn’t. I suspected interest rates would fall back in 2008, but I never thought they’d still be so low eight years later. I also thought bonds were finally topping out in 2015, and was wrong. (Worse, I’d had doubts years before that).

None of which is to say the dire warnings won’t eventually come true.

Markets always crash eventually, that’s nailed-on – it’s the timing that’s difficult – and I also think it’s very hard to believe that a growing global population on a finite planet will never see inflation again, even with all those robots doing jobs at slave labour rates.

But I would add that nearly ten years of seeing doomsters confounded should, at the least, be a reminder to the rest of us to stay humble and avoid hubris.

Everyone has been wrong about this stuff for years.

The optimists thought the economy would respond more quickly to low interest rates and that rates would be back to more normal levels by now.

The pessimists predicted we’d be using a wheelbarrow to take our shopping money to Tesco.

I think pragmatic investors who admitted they didn’t know how things would pan out and so stuck to their plans – and their diversified multi-asset portfolios – have carried the day on points.

Sure, they were never going to make the headlines.

But they’ve quietly achieved good gains, suffered lower levels of angst, and had less need to wipe egg off their faces every six months.

Is the tide turning for the low interest rate strategy?

The readers who suggested this as an article topic said they hadn’t seen much comment about the downsides of low interest rates.

I presume they’ve only been reading personal finance blogs and otherwise getting on with their life (and I applaud them for it) because I have read literally hundreds of thousands of words on the subject over the past few years.

I’m tempted to do a bit of post-crisis doomster bingo (hot words and phrases including the likes of manipulation, confiscation, helicopter money, Fiat currencies, ZIRP, the monetary laboratory, John Law, and gold, gold, gold) but I want to keep things simple and succinct, to honour that reader request.

So having set the scene as to why we have low interest rates, next week we’ll consider what specific potential problems such low rates may be causing that we as armchair investors need to worry about.

After all, there seem to be increasing signs that even central bankers fear we’re running out of road when it comes to very low rates.

The politicians who have hitherto been happy to let central banks carry the load are also showing signs of changing their tune.

Consider these recent words from Prime Minister Theresa May:

“While monetary policy – with super-low interest rates and quantitative easing – provided the necessary emergency medicine after the financial crash, we have to acknowledge there have been some bad side effects.

A change has got to come. And we are going to deliver it.“