Why the Bank of England will keep cutting interest rates 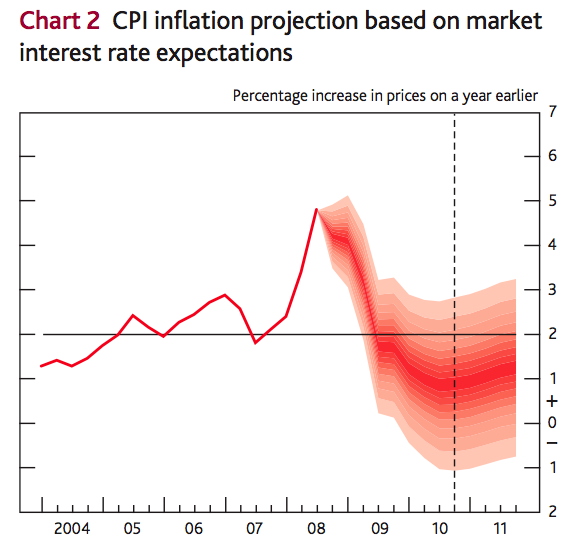 This fan chart depicts the Bank of England's assessment of the probability of various outcomes for CPI inflation up until 2012.

Pretty, isn’t it? Well, perhaps not if you’re a member of the Bank of England’s monetary policy committee, responsible for setting interest rates. In your case it’s a headache: a rather bloodier shade of red might be more appropriate.

The graph is taken from the Bank of England’s latest quarterly Inflation Report for November 2008. What does it mean?

Well, you’ll notice the fan grows outward from the red line, starting in Summer 2008. As the fan, erm, fans, the Bank becomes steadily less sure about the likely value of inflation.

Inflation is high now, but expected to plummet

The key thing to notice is that most of the fan is below the 2% inflation rate line, even though we’re starting off with whopping CPI inflation of around 5%. The Bank sees almost no chance inflation will rise any higher in the near-term; with nary a shimmy upwards, the central expectation plunges down with a trajectory to make an Olympic diver proud.

This graph tells us then that on current information, the Bank of England sees a very good chance that inflation will fall below the target rate of 2% over the next few years, all things being equal.

All things won’t be equal, of course. For one, the Bank will cut rates to try to stave off deflation (that’s the scary bit where the graph goes under 0%).

Base rates are now 4.5% but some predict rates could go to 1% or lower. Time to secure those 6.95% one-year fixed cash savings rates?

There’s always a danger that rates will be held low for too long, stoking up inflation for the future. But for now, the recession is more pressing. There’s probably plenty of time yet for those who fear inflation to buy gold.

Previous post: Why I don’t want Gordon Brown to cut my taxes