Worst job in the world: Bank of England governor 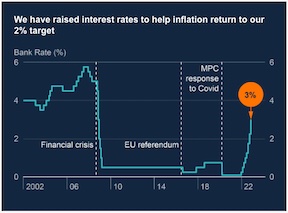 I can’t think of a much trickier in-tray than that facing governor Andrew Bailey at the Bank of England right now.

The institution he runs just hiked UK Bank Rate by 0.75% to 3% in the biggest jump for three decades.

And nobody is very happy about it.

“Too much too soon!”

“Too little too late!”

Everyone could do a better job than Bailey.

Never mind that just a month ago the Bank had to intervene directly in the market to stop a liquidity crisis in gilts cascading into the banking sector.

A mini-crisis manufactured overnight by wonks, that took less than a week to blow up.

And never mind – as many now seem to forget – that less than three years ago we faced a depression had not governments and central banks alike acted to offset the economic hit caused (unavoidably) by Covid and (perhaps over-egged) by repeated lockdowns.

Just look at where this interplay of fiscal stimulus, near-zero interest rates, economic inactivity, Brexit, and the shifting demand for goods and services has put us:

It’s a cat’s cradle of contradictory indicators – and it could have been worse.

Truss and Kwarteng: gone but not forgotten

In the wake of the Truss and Kwarteng mini-budget show (parental discretion advised) the market briefly expected the Bank of England to have hiked rates by as much as another 2% by now.

That fear saw banks scrambling to raise their mortgage rates, if not pull their products altogether.

It now feels like a bad dream. We still got the same 0.75% interest rate rise that we expected before Liz Truss had ever said she’d never resign for the first time.

Except that like in some horror movie where the relieved victim wakes up from a nightmare only to discover their cat impaled on a candlestick in the living room, those higher mortgage rates have yet to drop back to where they were.

Partly as a result, some pundits now forecast house price falls of 10-15%.

And if you think that’s not so bad – overdue if anything – then be careful what you wish for.

So long and thanks for all the cheques

Sure enough, the Bank of England has got even gloomier about the economy.

It already thinks a recession is underway. And its chart now suggests the pain will last for two years:

The good news is the Bank’s central projection is for a shallow recession, albeit an overlong one.

The better-but-not-exactly-news-news is that – contrary to what many people now protest – if the Bank and politicians hadn’t acted in 2020, then that plunge in GDP (orange line) would have taken far longer to bounce back.

In other words, the pain we’ll suffer soon is to pay for what we avoided back then.

The Bank of England governor under fire

For me, inflation continues to be the truly perplexing puzzle.

Some left-leaning rabble-rousers economists pitch the BoE as raising rates simply to mete out justice:

According to this fellow, Andrew Bailey actively wants to put millions out of work.

Obviously I don’t see it that way. Because I am a grown-up.

Nevertheless there is something perverse-seeming about raising rates even in the same breath as you forecast a two-year recession.

And I find the issue even more vexing because I’m seemingly one of the last people who still believes (perhaps being biased, having predicted it) that it was mostly the economic disruption caused by the pandemic and repeated lockdowns1 – rather than solely excessive monetary and fiscal stimulus – that’s behind most of this inflation.

But whatever the origin story, at least inflation is forecast to start falling sharply, and soon:

With a fair wind and/or a bit of luck (peace in Ukraine, say) the inflation shock could be abating by the middle of next year.

Another chunky crumb of comfort is that the Bank of England baked a 5.25% terminal rate for rates into its macro projections.

But that 5.25% was informed by our brief dalliance with Trussonomics, and it shouldn’t come to that.

Nevertheless on these figures as published, the Bank of England expects unemployment to climb above 6% by 2025.

Which will be miserable for anyone who loses their jobs – especially if house prices do start to fall sharply.

Indeed it’s not hard to see the potential for a fresh ‘doom loop’ where forced selling meets negative equity to make a bad situation even worse.

All of which is also what makes investing especially tricky at the moment, incidentally.

I’ve been getting more bullish for a while, partly because I had judged that market expectations for US rates were peaking.

But this isn’t a sunshine and roses view. Rather it’s because I think rising mortgage rates in the US have already done enough to throw that nation’s housing market into a funk.

It’s a similar story in the UK – albeit more Monty Pythonesque thanks to our political backdrop.

For me it’s a reason to avoid entirely abandoning those hated growth stocks, and to be wary of overloading on the cyclical value-style shares that have done so well since the end of 2021.

My hunch is the worst of the valuation compression is behind the growth companies, while at the same time the economic outlook is deteriorating for cheaper but less exceptional firms.

As for passive investors, no reason not to keep on trucking of course.

At least your bonds will be increasingly throwing off useful income.

As recently as December 2021, Central Banks didn’t think inflation would get so high, nor that they would have to raise interest rates by very much.

Low and slow was the forecast back then.

I can understand why central bankers feel they have to act tough now, given how wrong they were. But I also think a sharp pivot is increasingly more likely than not, as the cumulative effect of all this tightening adds up.

Personally, I see stagflation threatening to turn into mild deflation as becoming more of a risk than runaway inflation.

But it doesn’t have to end so bleakly either way. We could yet muddle through.

As anyone who saw the Lord of the Rings knows, it turned out you could simply walk into Mordor.

So perhaps Andrew Bailey similarly can raise interest rates, slow the economy, and then pull us up out of the descent before we dive into a really deep decline.

But I’d rather him than me.

Next post: Expected returns: Estimates for your investment planning

Previous post: CAPE ratio by country: how to find and use global stock valuation data