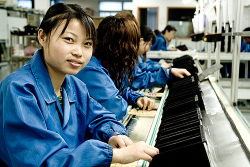 Everyone knows risky and excessive lending led to the credit crisis, with the collapse in US house prices sparking a global banking blow-up.

But what caused the risky and excessive lending?

Obviously the banks needed money to lend hand over fist without a care in the world. Where did they get it, and how were they able to sell on their toxic loans so easily?

Partly, they increased leverage – the amount they lent for every £1 in their reserves. But they were also aided by low interest rates, particularly in the US, which not only cheapened funding but also dramatically reduced the yield on risk-free government bonds, encouraging bankers and their clients to hunt for higher returns elsewhere.

The ultimate question then is what kept central bank interest rates so low? And on this point, Bank of England governor Mervyn King blames the Indians and the Chinese for not spending their money as fast as debt-happy Westerners.

In a speech last night (where he also warned about the UK deficit) King said:

The origins of the crisis lay in our inability to cope with the consequences of the entry into the world trading system of countries such as China, India, and the former Soviet empire – in a word, globalisation.

The benefits in terms of trade were visible; the costs of the implied capital flows were not.

Everyone seemed to gain. High-saving countries created employment, and low-saving countries enjoyed faster consumption growth as cheap imports meant that living standards rose by more than the increase in production – worth around half a percentage point a year in the United Kingdom.

These were the benefits of greater trade. But the pattern of poor countries saving a lot and rich countries borrowing was not sustainable. The consequences of our inability to cope with these capital flows did not show up in the usual macroeconomic indicators such as growth, unemployment and inflation. Overall balance in each of the major economies was maintained.

Rather, the massive flows of capital from the new entrants into western financial markets pushed down interest rates and encouraged risk-taking on an extraordinary scale. Banks expanded their balance sheets and new instruments were created to satisfy the search for yield. In the five years up to 2007, the balance sheets of the largest UK banks nearly trebled.

The build up of risk came to threaten the stability of the entire financial system. Capital flows provided the fuel which the developed world’s inadequately designed and regulated financial system then ignited to produce a firestorm that engulfed us all.

King is a smart bloke, and I think he’s had a good credit crisis. I also applaud him for pointing out as far back as 2006 that UK house prices are too high.

I understand too he is talking in technical terms here – he’s not really ‘blaming’ the Indians and Chinese for saving money, but rather pointing out that this saving had a consequence for Western economies.

However policy makers and politicians had ten years or more to get to grips with this trade imbalance.

Politicians preferred to enjoy the good times, and to spout dangerous inanities such as Gordon Brown’s famous claim to have abolished boom and bust.

But policy makers could also have been more pro-active.

King has the excuse that the Bank of England’s mandate is only to strictly target a 2% inflation rate, but his Bank could have lobbied for a more flexible mandate.

The Federal Reserve in the US has no such get-out clause, anyway, with promoting general economic stability part of its core mission.

The truth is everyone who mattered knew the Chinese were indirectly buying vast quantities of US debt – this kept rates low and enabled US and European consumers to buy ever more cheap TVs, and China to keep growing.

Surely they should have guessed there would be nasty consequences?

Those who say emerging markets will be the best investments in the future had better hope their citizens have the same confidence – and thus are more willing to spend money on the stuff and services we provide.

And Central Bankers must raise interest rates higher and sooner next time, to choke off excessive spending by our own citizens for whom frugality is a fad, not a way of life.

Previous post: Kraft’s sweet Cadbury deal is a bitter blow for would be British Buffetts