How did Warren Buffett get rich? 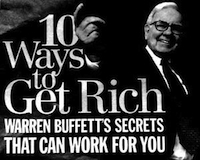 I very much admire Warren Buffett, both as a man and an investor, so don’t take my Biblical allusion too seriously.

Nevertheless, it’s remarkable how little credit you’ll find given to the way Buffett’s early partnerships turbo-charged his wealth, sowing the seeds for him to become the world’s intermittently richest man.

Most pundits have preferred to focus on how Warren Buffett got rich investing in Coca-Cola (and you can too!) or else how Buffett is really a businessman disguised as a stock trader, so you shouldn’t bother.

More recently academics have sought to explain away his market-beating achievements as a combination of factor investing and benefiting from cheap leverage.1

But the truth of how Buffett got rich lies somewhere in between.

Stock picking certainly explains why he’s a millionaire. But his early business success in running money for other people is almost certainly why Buffett is a billionaire.

From Buffett’s biography to the regular eulogies about his life, the fact that Buffett claimed a huge swathe of his partners’ gains to enrich himself is rarely mentioned.

That’s a bit like dropping the Wright Brothers from the history of flight, or omitting Bilbo Baggins from The Lord of the Rings.

After a precocious childhood selling newspapers and investing in his first shares when he was 11 – so far, so fitting the legend – Buffett began his professional investing career on Wall Street as an analyst.

, his hero and the biggest single influence on his investing style.

His initial salary was $12,000, which sounds modest but is the equivalent of more than $110,000 in today’s money. Not bad at all for a 24-year old, even by the standards of modern trading floors.

Buffett’s high starting salary is the first aspect of his wealth accumulation that’s rarely dwelt on by stock pickers who dream of becoming a billionaire on £250 a month in an ISA.

On the other hand, the legend reasserts itself with the truth that Buffett did scrimp and save – he reinvested most of what he earned.

According to my thrice-read copy of The Snowball

, by 1956 Buffett had amassed $174,000. He did this by compounding his teenage savings and his more recent earnings in a focused share portfolio – arguably the closest his life history comes to what his admirers say we should do to emulate his success.

Buffett was a millionaire in today’s terms while still in his mid-twenties, and we certainly shouldn’t downplay this achievement.

But what laid the foundations for him to enter the ranks of the mega-rich were the private investment partnerships that he set up and ran, largely for family and friends, between 1956 and 1969.

The terms of these partnerships varied. For the first partnership, the seven other founding partners put in $105,000.

Here’s his recollection of the deal, from The Snowball:

“I got half the upside above a four percent threshold and I took a quarter of the downside myself. So if I broke even, I lost money. And my obligation to pay back losses was not limited to my capital. It was unlimited”.

Buffett felt an obligation to pay back losses partly because his early investors were the closest people in his life. His wife’s father was one of them, and his sister another.

The stipulation that would see him out of pocket if his returns fell below 4% is far removed from the typical hedge fund of today.

Many still charge a 2% fee every year, regardless of performance.

And even today’s greediest hedge funds don’t claim “half the upside”. For years the standard deal was 2% annual and a 20% performance fee – and it’s been falling in recent times – as well as some sort of high water mark to theoretically protect investors from volatility that enriches the manager but not the customers.2

True, Buffett’s upside came only after the first 4%, whereas most hedge funds today will take, say, 20% of anything they make at all (even interest on cash in the bank).

This is Warren Buffett we’re talking about here, though – and he doesn’t do miserly returns for long.

1958 was even better. Again quoting The Snowball:

The next year the partnerships’ had risen more than 40% in value. Buffett’s fees so far from managing the partnerships, reinvested, came to $83,085. These fees had mushroomed his initial contribution of only $700 – $100 contributed to each of the seven partnerships – into a stake worth 9.5% of the combined value of all the partnerships.

I hope you don’t need to bust out a compound interest calculator to see how well the partnership fee structure was already serving Buffett.

Sure, he needed to succeed with his stock picking to make decent returns for his partners.

The point though is that it was by leveraging other people’s money into those picks that Buffett made himself rich.

If Buffett had merely invested the $700 that he’d put into the partnerships over those first two years instead, then he’d have grown it to merely $1,078.

That’s $82,000 less than the money he made by investing for other people!

Gearing up his great stockpicking

My point is not that Warren Buffett isn’t a great investor – he is.

Nor am I saying he was ripping off his early investors. He made most of them into multi-millionaires, and they probably never realised how much the arrangement protected their downside.

Most people care more about losing money than making it, so I believe the terms weren’t sheer avarice on Buffett’s part.

Nevertheless, it was the fees generated by his investing talent through the partnerships that made Buffett rich, not those pure stock picks themselves. By January 1962, barely five years after he began, Buffett was a millionaire on paper, with his share of the partnerships’ assets valued at $1,025,000.3

The moral? If you want to get as rich as Warren Buffett, you don’t merely need to start early and grow old. Simply investing like Buffett won’t do it, either.

Instead, to get very rich as an investor, you need to invest like Warren Buffett on other people’s behalf, and claim a good portion of the gains for yourself.

And in recent years he has championed index funds as the best solution for everyday investors like you and me.

Once you know how well he did from high fees himself in his pre-Berkshire Hathaway years, you can’t help thinking there’s an element of ‘poacher turned gamekeeper’ to this.

(Which is certainly no reason to ignore his advice to invest passively. Quite the opposite!)

Some people have saluted how well Berkshire Hathaway has served its shareholders, compared to how most hedge fund managers milk their customers with the 2/20 structure.

The truth is more complicated. Just as Warren Buffett uses folksy analogies to make economic issues more understandable, his most ardent fans – if not the man himself – have also played us like a fiddle when it comes to seeing how he first got rich.

If Buffett was a private investor in his spare time, as per the myth – if he was a successful everyday businessman investing his excess cash, or maybe even a doctor or a teacher – then he’d very likely have become a multi-millionaire.

I doubt we would have heard of him, though.

I don’t know if Warren Buffett reads Monevator – I’d be flattered for sure – but he was less coy about his early hedge fund days in publicity for his later book, Tap Dancing to Work

, than he was for The Snowball.

Here he is discussing his old hedge fund with The New York Times:

Until 1969, Mr. Buffett operated a private partnership that was akin in some ways to a modern hedge fund, except the fee structure was decidedly different.

Instead of charging “2 and 20” — a 2 percent management fee and 20 percent of profits — Mr. Buffett’s investors “keep all of the annual gains up to 6 percent; above that level Buffett takes a one-quarter cut,” Ms. Loomis wrote. […]

“If you want to make a lot of money and you own a hedge fund or a private equity fund, there’s nothing like 2 and 20 and a lot of leverage,” he said over a lunch of Cobb salad.

“If I kept my partnership and owned Berkshire through that, I would have made even more money.”

It was managing money for other people that enabled Warren Buffett to get very rich, very young.

And that early fortune gave him the capital he needed to compound to become a billionaire.

Next post: Weekend reading: See why you should invest a lump sum now (and a scam alert!)