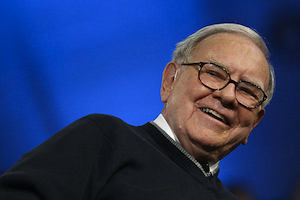 There are many things that make Warren Buffett remarkable, as you’ll know if you’ve read The Snowball, his biography.

There’s his appetite for junk food, and how his first wife selected his second. There’s also the fact there’s no Warren Buffett Hedge Fund.

Instead, what is now Berkshire Hathaway was born out of nearly a dozen investment partnerships that Buffett created and ran for his family and friends.

When these were wound up, many of the partners rolled their money together with his, on equal terms as shareholders. They were then made fabulously wealthy over the decades as the greatest ever investor compounded their shareholdings.

Buffett’s investing and business activities made himself rich, too. At the peak of his wealth in 2008 – before he started giving it away – he was the richest man in the world, with a fortune of $62 billion.

The Buffett Hedge fund that wasn’t

A win-win scenario for Buffett and his partners, you might think – but it’s not a good enough win for a hedge fund.

These typically charge 2% annual fees for managing your money, and 20% of any outperformance – and as a result they devour your gains.

Just how much could you lose from fees? Here’s a worst case analysis of hedge fund fees by Terry Smith, the CEO of £1 billion city firm Tullet Prebon:

Warren Buffett has produced a stellar investment performance over the past 45 years, compounding returns at 20.46% pa.

If you had invested $1,000 in the shares of Berkshire Hathaway when Buffett began running it in 1965, by the end of 2009 your investment would have been worth $4.3m.

However, if instead of running Berkshire Hathaway as a company in which he co-invests with you, Buffett had set it up as a hedge fund and charged 2% of the value of the funds as an annual fee plus 20% of any gains, of that $4.3m, $4.0m would belong to him as manager and only $300,000 would belong to you, the investor.

And this is the result you would get if your hedge fund manager had equalled Warren Buffett’s performance. Believe me, he or she won’t.

Smith’s article has been criticised because a hedge fund wouldn’t usually reinvest the 2% management fee back into its own fund, and compound that over time. It’s this compounding of the fees that really results in the huge gains for the hedge fund in Smith’s example.

I don’t agree with this criticism though; Buffett’s own record sees all invested money compounding at 20.46%, so it seems reasonable to assume the fund does the same to make a comparison – even if in reality hedge fund managers would spend their fee money on Monaco apartments and Lamborghinis.

Another criticism is that Smith assumes the hedge fund always gets its 20%, whereas in reality there is a high water mark which means in years where it underperforms it would ‘only’ get its 2% management fee, until the portfolio breached the previous high.

As far as I can see this is mathematical shorthand though, unless you’re prepared to download Buffett’s returns every year and plug those into a hedge fund modelled on the 2/20 structure.

On balance, I think Smith’s point is well made. Not least his throwaway last line, about whether your hedge fund manager would match Buffett’s record.

Don’t hold your breath! The average hedge fund is currently delivering the same performance as a simple basket of index tracking ETFs, and the latter charge barely 0.5% a year.

You might well ask if Buffett is so smart, why didn’t he start a hedge fund instead? There were many such funds in existence by 1965, and Buffett’s first employer Graham Newman was essentially a hedge fund.

And the answer is – he did!

In the days before Berkshire Hathaway, Warren Buffett ran those partnerships I mentioned along hedge fund lines. This was how he initially made his fortune.

Yet even these weren’t run following the 2/20 standard of hedge funds. To quote Buffett from The Snowball

“I got half the upside above a 4% threshold, and I took a quarter of the downside myself. So if I broke even, I lost money. And my obligation to pay back losses was not limited to my capital. It was unlimited.”

Normal hedge funds take no hit in negative years, so Buffett was already doing things differently. Then he did exactly what critics of Smith’s calculations say no hedge fund would really do – Buffett reinvested the fees he drew from his partners back into the partnerships, compounding his own share of the capital year on year.

Don’t bank on finding another Buffett

Buffett’s supreme confidence in his investing abilities and a favourable market meant he never took the downside of his unusual fee structure – because there were no years where he made less than 4%!

The legend of Buffett might be very different if he’d had a bad year. We’d probably never have heard of him today if he’d had a few bad years in a row.

Perhaps Buffett, too, had realized this by the 1970s, when he wound the partnerships down and instead lumped his money in with that of his most faithful investors to co-own the collection of companies that became the modern Berkshire Hathaway.

These first investors and those that later bought Berkshire stock were lucky Buffett didn’t foist the 2/20 rule on them, that’s for sure. They were made immeasurably wealthier by the arrangement.

Yet I suspect from my reading of Buffett that he’d say luck had nothing to do with it. They were his partners, not his clients, and it was having their backing that enabled him to act with the confidence and boldness that has defined his five-decade career.

The bottom line: There is no Warren Buffett Hedge Fund because while he is an implacable acquirer, Buffett doesn’t think like a hedge fund manager. He thinks – and always has thought – like a business owner, and a shareholder.

The other bottom line: Avoid high fees and hedge funds like the plague.