Warren Buffett’s most personal bet yet on index fund investing 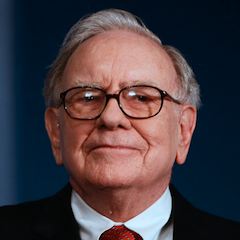 The world’s greatest investor, Warren Buffett, has often shared his thoughts on investing in index funds over the years.

I say surprisingly, because Buffett has one of the best long-term records of any active manager ever.

Buffett’s superlative record of very nearly 20% annual returns a year since the 1960s has been achieved even as the money he manages has grown from its spare bedroom hedge fund beginnings into the vast $280 billion Berkshire Hathaway vehicle he runs today.

So if anyone deserves to strut about saying index investing is for idiots and active management is the way to go, it’s Buffett.

But he says the complete opposite.

In his 2014 letter to his shareholders, Warren Buffett has come out more explicitly than ever as index investing’s richest champion.

In aggregate, American business has done wonderfully over time and will continue to do so (though, most assuredly, in unpredictable fits and starts).

In the 20th century, the Dow Jones industrial index advanced from 66 to 11,497, paying a rising stream of dividends to boot. The 21st century will witness further gains, almost certain to be substantial.

The goal of the nonprofessional should not be to pick winners — neither he nor his “helpers” can do that — but should rather be to own a cross section of businesses that in aggregate are bound to do well.

A low-cost S&P 500 index fund will achieve this goal.

Buffett even reveals that the cash he is leaving his wife in his will1 is to be invested in bonds and a Vanguard index fund:

I believe the trust’s long-term results from this policy will be superior to those attained by most investors — whether pension funds, institutions, or individuals — who employ high-fee managers.

Still think a very simple asset allocation is beneath you?

Admittedly Buffett has gone one step further in his will than I’d suggest is appropriate for most of us. He will invest all of his wife’s money in the US, and so eschew the benefits of investing overseas.

But remember that this will be a legacy for his wife, who is already in her late 60s. By investing for her entirely in America, Buffett sidesteps any worries about currency risk, which can be more of an issue when you’ve fewer years for your investing to play out.

And after several decades of urging his fellow countrymen to Buy America, it’s no surprise Buffett thinks it will do fine for a couple more decades after he’s gone.

As well as making the case for index funds, Buffett’s new letter stresses that your behaviour as an investor is just as important as how you invest.

To illustrate, he revives the late Barton Biggs’ quip about bull markets:

“A bull market is like sex. It feels best just before it ends.”

Buffett says the main danger is that the timid or beginning investor will enter the market at a time of extreme exuberance and give up when he loses money. (The unfortunate opposite of buying more heavily in bear markets).

The antidote to that kind of mistiming is for an investor to accumulate shares over a long period and never sell when the news is bad and stocks are well off their highs.

Following those rules, the “know-nothing” investor who both diversifies and keeps his costs minimal is virtually certain to get satisfactory results.

Indeed, the unsophisticated investor who is realistic about his shortcomings is likely to obtain better long-term results than the knowledgeable professional who is blind to even a single weakness.

To back up his case that a “know-nothing” investor can do fine with buy and hold, Buffett cites a farm he acquired in the 1980s, and also an investment he made in a New York apartment block in the early ’90s.

Buffett is no farmer, and having lived in the same house since the 1950s he’s clearly not obsessed with property, either.

Yet his farm has gone up five-fold since he bought – despite him only visiting it once – and his apartment block has paid out 150% of what he put in over the years as it’s been refinanced at lower interest rates, whilst annual dividends now exceed 35% of the initial investment!

He’s yet to visit the apartment.

My two purchases were made in 1986 and 1993. What the economy, interest rates, or the stock market might do in the years immediately following — 1987 and 1994 — was of no importance to me in determining the success of those investments.

I can’t remember what the headlines or pundits were saying at the time.

Whatever the chatter, corn would keep growing in Nebraska and tenants would flock to New York.

So Buffett bought and held.

Of course, you might say Buffett’s promotion of index funds is just the ultimate in grandstanding for his own abilities as an active investor.

After all, he isn’t selling Berkshire’s assets to pump hundreds of billions into an S&P tracker fund. And he’s not suggested his shareholders swap their Berkshire stock for Vanguard index funds, either.

“Invest with me or give up!” would be a cynical summary of Buffett’s message.

Too cynical, I think. The fact is Buffett has long given great tips to anyone wondering how to invest their money, and he knows as well as anybody that the vast majority who choose to use active mangers will be disappointed.

He’s even in the middle of (almost certainly) winning a $1 million bet with a hedge fund manager, wagering index funds will beat the latter’s chosen hedge funds over ten years.

To conclude, I’ll paraphrase his famous rallying cry when the stock market crashed in 2008 and despair reigned: