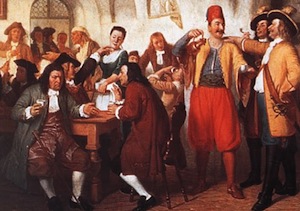 Sensible investors put their money to work across the world, rather than only investing it at home.

Buy British or Made in USA are good slogans for the sellers of knitwear, tractors, and cauliflowers, but they’re a poor guide if you want to build a robust portfolio.

This isn’t because I expect the British stock market to whither away like our coal mining or ship building industries did, or because the troubled UK economy is doomed.

On the contrary, I think the London Stock Exchange is one of the world’s most attractive, with companies that offer an appealing mix of growth, income, stability, and innovation.

As for the UK economy, reports of its death are much exaggerated.

Besides, the biggest UK companies that dominate the FTSE All-Share index do over 75% of their business overseas. This means they’re far less dependent on the performance of Blighty PLC than is popularly supposed.

But our companies are more exposed to certain regions of the world than others.

It’s been said, for example, that we export more to Ireland than we do to the BRIC1 nations combined, which is a tad worrying given how it sometimes seems there are more Irish backpackers in Irish bars across the world than there are Irish citizens in Ireland!

But trade is a global affair nowadays.

Investing overseas therefore gives you access to different types of companies and opportunities, unconstrained by history or the geographic accident of our lump of rock’s position on the spinning globe.

Gambling with your country’s money

Investing in foreign shares exposes you to currency risk, which is to say your overseas investments will change in value as their price in the local currency fluctuates when converted back into pound sterling.

In the short-term this can be a good or bad thing, in terms of your profit – it depends how exchange rates go after you make your overseas investment.

Over the long-term, however, currency variations on average play a minor role in total equity returns. Currency hedging is expensive and difficult for private investors, so I wouldn’t worry too much about it provided you’ve got a long time horizon and you’re spreading your equity buying across the world.

Oh, and in case you’re wondering if overseas investing means you’ll need to phone city boys in Shanghai or Sydney to place trades, fear not!

While you can hold even individual foreign company shares in an ISA, the majority of us are best off using collective funds for the money we invest away from our home country.

(Most of us are best off in UK trackers, too, for that matter, but that’s a different dozen or so articles).

Investing overseas via funds could entail you buying index trackers that follow foreign markets, like those we use in our Slow & Steady model portfolio. You can even track emerging markets using passive funds.

Alternatively, new country-specific ETFs are debuting all the time, though most investors will find it simpler and safer to aim for broader regional exposure.

Some investors like myself also put money into big global investment trusts like RIT Capital Partners. This trust invests very widely around the world, and its managers actively monitor currency exposure as an added benefit (or not, as it may turn out) for its shareholders.

Investing globally is more helpful with shares than bonds

The main benefit of investing overseas is that diversification across countries can be expected to reduce risk in your portfolio, without doing too much damage to your overall return.

According to the latest research from the very credible London Business School2, the risk reduction you’d have seen from holding the world index rather than owning only domestic equities between 1972 and 2011 made diversification worthwhile for every major country studied except South Africa.

They found that investors in the core 19 countries looked at3 would have enjoyed a risk reduction of on average 20% from holding the world index, as opposed to if they’d held only their own countries’ shares.

Academically speaking, that’s a trade-off you should take, even if it slightly reduces your return (though see below for more comments on risk).

Investors from Norway and Finland would have seen around a 50% reduction in risk, due to how skewed their economies are, and the overweight presence of a few massively larger companies. Take note, if you’re Norwegian or Finnish!

Interestingly, the professors do not report the same risk-reducing benefits from diversifying into global bonds.

With bonds, the currency risk outweighs the benefits of diversification.

Hence currency risk looms large with bonds, compared to the minor diversification benefits of holding one developed country’s bond versus another, given that most mature developed world sovereigns have not defaulted in the past few decades. (Some might suggest the professors stand ready to re-write their rule books.)

In contrast to bonds, by buying foreign shares, you are getting access to different country’s industries, trading partners, local specialisms and resources, as well as varied politics and demographics.

The risks of picking the best countries to invest in

Some foreign share markets will likely do a lot better than others in our lifetime, of course.

This means spreading money across the world’s stock markets will likely reduce your returns, compared to if you bought only the best performing markets.

But before you put on your red braces and go winner-spotting, keep in mind:

Remember, risk isn’t necessarily something to be entirely shunned. I haven’t got a problem with a young investor putting a bigger allocation into a spread of emerging markets, say, for the prospect of higher long-term returns, provided they’ve understood the extra volatility that’s likely along the way.

But I would still argue against betting very heavily on any particular country, or even region, in the pursuit of extra riches.

Few of us really want to gamble away a happy retirement for the prospect of a few more bottles of champagne in our old age.

Accordingly, most of us should sacrifice a few tenths of a percent of return by spreading our money more widely in order to sleep better at night. It’s the same rationale as that for having a diversified portfolio that includes bonds and other low return, low volatility asset classes.

As we’ll see in my next post, you don’t want to try to pick the United States of the 21st Century, only to discover you actually invested in the equivalent of the Greeks.

Next post: Weekend reading: Iceland comes in from the cold