Why investing in overseas markets will diversify your portfolio

Books on investment often suggest investing overseas as a method of diversifying your portfolio. There are several reasons why investing abroad can be a good idea, including:

Diversifying overseas sounds great in theory. But as the graph at the start of this article shows (click to enlarge), the major world markets have moved in step in recent times.

Even before the credit crisis, many commentators were saying the world’s markets were becoming closely coupled. Is there any point then in putting money overseas?

I believe the answer is yes, especially when you take the currency factor into account.

The Yen rides to the rescue

Here’s a real-life example of how investing overseas can improve your returns.

About a year ago I moved a significant portion of my ISA holdings (about 10-15% of my total portfolio) entirely into Asian trackers. Most of this money was put into a Japanese index tracker, with the rest going into a basket of other South East Asian trackers.

I invested in Japan because I believed two things:

On the out-performance of the Japanese market, I was totally wrong. Japan proved very exposed to Western borrowing due to its reliance on overseas exports. Add falling exports to a weak domestic economy, investor disinterest in the Japanese stock market, political uncertainty and various other factors, and it’s maybe not surprising that Japan proved the worst performing mature market over the past 12 months.

But I was right that the pound was overly strong.

This call wasn’t the result of some great analysis on my part – I’m no currency trader. It just looked like I could buy a lot of Japanese stocks with my inflated pounds. I hoped to get a double whammy from both Japanese market growth, and over time an appreciating Yen. In the event, I got the latter, but not the stock market growth.

I’d be lying though if I said I thought the Yen would rise as strongly and quickly as it has versus the pound. Just look at the Yen go: 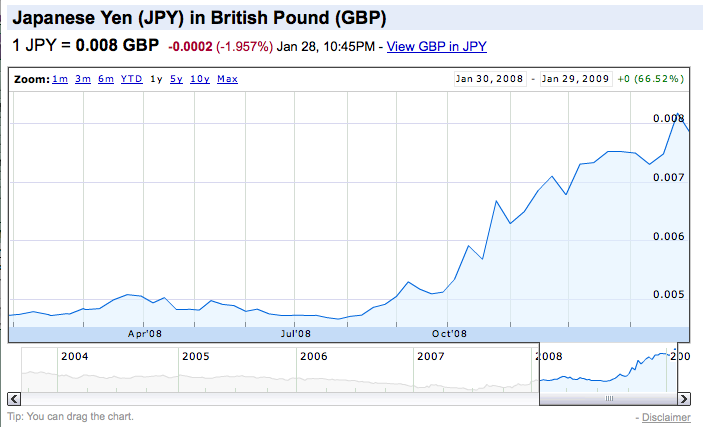 One Yen buys a lot more pounds these days

What the 67% rise in the value of the Yen versus the Pound boils down to is that investments held in Yen are worth a lot more in UK pound terms than 12 months ago.

As a result, even though the Japanese stock market has fallen 40% over the past year, my investment in pound terms has roughly broken even. My Japanese ISA holdings have provided much needed ballast to keep my net worth up as markets have fallen.

Imagine if I was a Japanese writer who had invested in the London stock market. I could now be highlighting the risks of overseas investment, as my UK investments fell in value in Yen terms.

Investing overseas is riskier than investing in your home market when you are exposed to currency moves as well as market performance. This is because you have two ‘gears’ determining your investment result: the performance of the country’s market, and the ‘currency risk‘ arising from exposure to moves in that country’s currency.

For me, the extra risk of investing overseas has paid off over the past 12 months. The other side of the coin is the losses of our fictitious Japanese investor.

Most of us will want to spend our money at home, eventually, so I think it’s best to hold most of your portfolio in your home currency. Allocating a smaller portion to overseas investment can provide some diversification without risking your total ‘pot’. As you draw closer to the spending versus investing phase of your life, you might slowly bring more of your overseas money back home to reduce your currency risk.

Another option is to invest overseas via a fund that removes currency risk via hedging. Like this, you simply get the overseas market’s performance. Funds are more expensive than index trackers, however, and as I’ve written I believe currency risks can be beneficial.

Yet another option would be to construct your own hedge via currency spreadbets or options, but that’s beyond the scope of this article, and not something I’ve done.

See the Monevator financial glossary for more on currency risk.

I suspect the short-term correlation of the major markets won’t hold over the long-term.

It’s fashionable to say that because of globalisation, markets are now entwined and set to move in step.

But again, tell that to our Japanese investor, who has watched the Tokyo market plummet and then languish while the US market has raced ahead.

Here’s a graph showing returns from the US (red), the UK (blue) and the Japanese market (green) over the past 25 years: 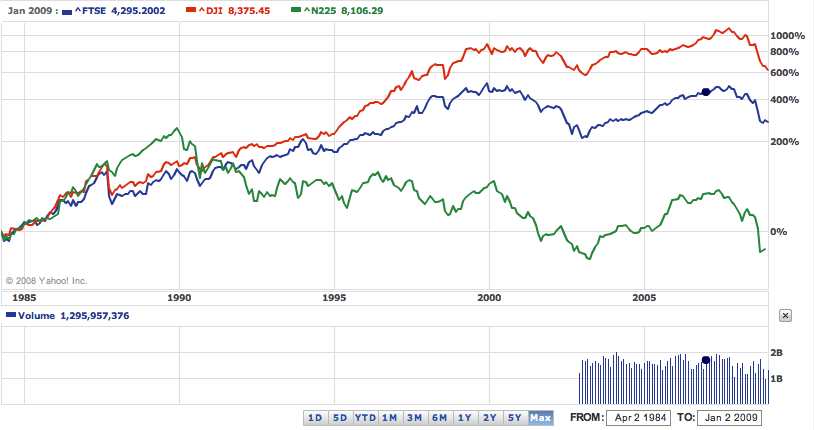 Japan is back into negative territory, whereas the US Dow Jones index is up 600% over the same period. Quite a difference!

Many investors now dismiss Japan as a basket case of a stock market. Yet Japan boasts the second-biggest economy in the world, and its shares look cheap on many measures, from book value to companies with net cash. Who is to say that the next 25 years won’t see the Japanese market revert to leadership? Perhaps investments in Japan made now will prove bargains in years to come.

US writers often cite the US market’s returns over recent decades as a reason not to invest overseas. But a similar case could have been made in Japan in the late 1980s, as the Nikkei approached 40,000 points. Anyone putting all their money into Japan has had plenty of time to regret doing so as it plunged over the subsequent decades. Even today, the Nikkei is only just above 8,000 points.

It’s very dangerous to assume one market has some special leadership because of its performance, and then to justify that assumption afterwards. Up until 1990, the consensus was that Japan and its way of doing business and running companies would sweep the world. No one says that now.

According to Morgan Stanley Capital International, the U.S. market has been among the world’s top five performers in only four of the past 20 years.

My personal plan is to invest overseas when foreign markets look cheap and the pound looks strong. At the moment, the pound seems weak against most currencies and the UK market looks like good value, so I’m not adding to my investments abroad.

At this point I should apologize to any currency traders and financial professors who happen to be reading. Judging currency moves is notoriously difficult, and these are just my gut feelings. You must make your own mind up, or assume currency moves will cancel out over time (the approach advocated by the great overseas investor, Sir John Templeton).

A more difficult question is whether I should realize some of my currency gains, by selling my Japanese trackers and putting that money into the UK market. I did this earlier in the year with some US investments I had – too early – although I’ve kept other US exposure, particularly in technology.

On balance, I’m inclined to do nothing for now with my Japanese trackers. It’s likely the Yen will depreciate in the future, but such a move would help Japan’s exporters, which would help its market – and my ISA holdings. And as I’ve written, I think the Japanese market looks very cheap.

But who really knows? Such are the swings and roundabouts of investing overseas. It’s hard enough (or impossible) to anticipate how well a particular stock market is going to do. Currency risk makes the prediction twice as difficult.

Better to hedge my bets and spread my cash about to gain some diversification benefits from overseas markets – and beyond that accept my limits.

Next post: 10 reasons to be cheerful as an investor