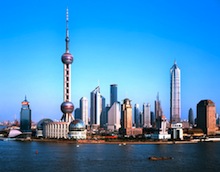 Being a cynical old soul, I raise an eyebrow at the launch of any financial product – even one as potentially useful to UK investors as an emerging markets index fund, such as the new one from Legal and General.

It’s also that hot-and-hyped sectors have a habit of delivering cold returns, as we saw with:

Will the emerging market hype end in tears? The stage is certainly being set.

Everyone from hedge fund managers to the man on the Clapham omnibus knows that emerging markets are where the growth is.

Chinese GDP is expanding at over 9% a year. India is growing at 8.9%, and Brazil is close behind. More developed Asian countries from South Korea to Thailand are still growing, too, and even Russia is bouncing back.

These countries are as different from each other as they are from Britain, America, Western Europe and Japan, but they do share several traits:

It doesn’t take a genius to see that a country growing at 8% with a lot more young people than pensioners and a big trade surplus has a lot more room to grow than Italy, Japan – or us for that matter.

For the past few years, those booming economies have been coupled with great returns for investors.

Compare the performance of the FTSE All World Emerging Market Index with the UK’s FTSE All Share in successive 12-month periods to the end of September:

Not only has the emerging index beaten UK companies in the good years – it didn’t do any worse in the dire year of 2008, either.

Here’s how your money would have grown over those five years: 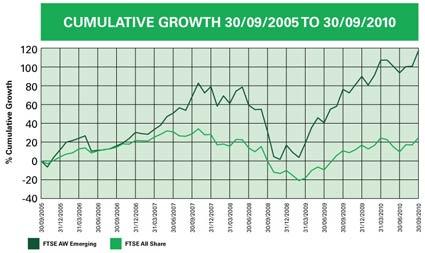 Wow! (But remember, the past is no guarantee...)

Does the strength of emerging economies mean you can just move all your money into them and start leafing through Saga’s retirement brochures?

Not quite. The phrase ‘past performance is no guide to future performance’ isn’t just a disclaimer that fund managers use to get themselves off the hook.

As I mentioned above, previously hot sectors have a habit of blowing up, although nobody can know exactly when and as we saw with the tech boom in the 1990s, they can run for years. Emerging markets have soared and crashed before!

Also, the growth in the index above shows how the price of companies has increased over the past few years.

It doesn’t mean those companies are necessarily performing brilliantly (although many of them are). It could – and does – partly mean that investors are prepared to pay more for them, not least because more investors around the world now want to own a piece of the emerging market action.

This ‘re-rating’ is subtle but important:

If in contrast they were happy to pay 15x earnings in the past, but will now only pay 9x earnings, then the value of the same company will fall from £150 million to £90 million.

That’s partly what’s happened with emerging markets, versus developed markets like the UK. Yes, business is booming in countries like India, but investors have also decided they’ll pay much higher prices to access that growth, too.

As a result, the Indian market has re-rated and is now on a pretty high price-to-earnings ratio of 22. In contrast, the UK market is on a P/E of around 14, with the US market on 16, according to FT data.

Blue chip companies in the US used to command a much higher rating than risky and volatile emerging market ones, which were on lower ratings. Who is to say that won’t ever be the case again?

Valuation really is key. An excellent report from The London Business school found that because investors in high growth countries are prepared to pay more for such shares, they frequently suffer worse returns, when earnings fail to match the most optimistic projections.1

In contrast, paying a cheap price for average growth often yielded at least as good returns.

None of this is a reason to shun emerging markets, but just a reminder to invest cautiously.

I fully believe in the globalization big picture. Environmental catastrophe aside, India, Africa, and South America will still be producing aspirational middle-class graduates long after you and I are drawing our pensions!

However trading costs with investment trusts and ETFs add up, especially if you’re an investor of modest means.

Also consider the history of booms and busts in emerging markets. I think another bubble is brewing, but I’ve no idea when it will burst – it could easily be several years away. And when it does burst it’ll probably leave emerging market shares cheaply rated, and so good value.

The best way to invest into volatile markets like this for most people is through regular monthly savings, and that’s where an index fund is ideal. Unlike with ETFs you don’t pay trading fees, and by saving every month you benefit from averaging into your investment.

As far as I’m aware, the new L&G emerging markets index fund is a first for UK investors. It was only launched at the end of October. You can read more about the index it tracks on the FTSE website.

The total expense ratio is estimated at 0.99%, which is high-ish for a UK index fund these days, but not massively more expensive than other emerging options. The iShares emerging markets ETF has a TER of 0.75%, while the Templeton Trust I hold has a TER of 1.3%.2

I like, use, and have recommended L&G’s platform in the past. Partly it’s out of habit (its index funds are no longer the very cheapest) but also I like how easily I can switch between its different index funds for free.

I’ll be adding the new emerging markets index fund to my mix. But I’ll be keeping one eye on the exit!

Click through for more information about the emerging markets index fund.

Previous post: Index fund tactics to save you a bundle