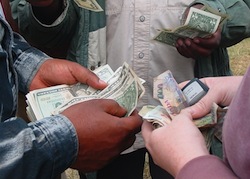 If you have investments or assets in a foreign country with a different currency, you face currency risk, unless the foreign currency is pegged to your domestic currency or your exposure is hedged.

A simple example shows how currency risk affects your returns.

Suppose you’re an American investor and you put $10,000 into a European stock market tracker fund. The fund is not hedged, and so you’re exposed to changes in the exchange rate between the dollar and the euro. That is, you’re exposed to currency risk.

Let’s say that over the next 12 months the European stock market and therefore your tracker goes up 20% in local euro terms:

As you can see, currency risk can dramatically affect your returns, from magnifying your gains to turning gains into losses in your own currency.

The basic rule is:

Any business that operates across different territories that use different currencies will face currency risk. Businesses will be hurt and helped in different ways from exchange rate moves.

Companies often hedge exchange rate exposure to try to deal with currency risk. The theory is they should concentrate on their proper business, rather than have a side business in currency trading.

However hedging does cost money, and a poor call can make a big dent in profits.

Dealing with currency risk when investing

So much for business, what about the likes of us one-man investing bands?

Opinion is divided as to whether currency risk is a good thing for us. There is some academic evidence that exposure to currency risk does not reward investors with higher returns. Others argue it increases diversification and so reduces risk, on top of the usual benefits of investing overseas.

Hedging away the currency risk – which comes built into some funds and ETFs – has its own snags. It costs money, whether born separately by you as an investor, or in the shape of higher costs via a hedged fund. You also give up potential rewards, which is always the unarguable price of hedging but still annoying when it happens.

Some notable investors believe currency risks can be ignored if investing in overseas equities for long periods. Sir John Templeton, the grandfather of far-flung investing, believed currency movements were neutral over the long-term when investing in equities.

Overseas bond funds are usually best hedged though – the shorter life of bonds reduces the time for currency affects to even out.

Not all foreign investments expose you to currency risk, especially if you’re an American investor. Many emerging market countries have currencies pegged to the dollar. This means their currencies rise and fall with the dollar, so currency risk can be ignored by U.S. investors putting money there.

Hedging as a side product of an investment

Some investments are inherently hedged.

Suppose you’re a U.S. investor, and you buy shares in AstraZeneca, the UK-listed drugs giant.

The value of your investment is determined by:

a) the performance of the AstraZeneca share price, and

The currency danger for you as a U.S. investor is that the pound may fall versus the dollar after you’ve made your investment.

Now suppose that after some years the pound falls to parity with the dollar, so £1 is worth $1.

If the AstraZeneca share price stayed the same over the period, you’d have only $500 when you sold up and brought your pound sterling money back into dollars. You’d have lost $500 due to the change in the exchange rate.

However – the Astra share price would be very unlikely to stay the same if the exchange rate changed like this, because Astra does most of its business in dollars.

As the dollar strengthened towards parity with the pound, the dollars that Astra made overseas would be worth more pounds when repatriated back home to the UK.

Astra’s earnings and profits would thus rise in pound terms purely from this exchange rate change, and its share price would almost certainly rise too.

For US investors, such a rise in the share price could potentially cancel out for U.S. investors the loss from the exchange rate change!

Next post: Weekend reading: The US recession was bad enough, ok?