Weekend reading: The US recession was bad enough, ok?

Like it always does, the first half of the financial year has confounded all but the Internet geniuses who claim to have seen it all coming.

The US engine is trying to pull global growth forward, while Europe is asleep in the coach carriage. Meanwhile there’s trouble in the boiler room – China is spluttering in fits and starts. Assets have run hither and thither, with stocks and bonds up and down (and up) and the gold price crashing.

Meanwhile UK house prices are ahead nearly 4% year-over-year, which is the fastest rate of growth for three years. I was still wrong to claim an early victory for UK PLC, but the double dip recession has been revised away and more people are employed in Blighty than ever before, to the consternation of 50-something grumblers everywhere.

Indeed the most salient takeaway of the past few years is how markets and economics conspire to make fools of us all.

I may have been too optimistic – not about stock markets, but about how long it’d take to pull the global economy out of the mire. But equally wrong-footed were the doomsters who predicted we’d be feasting on tins of spam cooked over fires fueled by worthless stock certificates.

Where did these death-eaters go wrong? I think they got blindsided by moral justice, and what they perceive as the lack of it.

I saw the pre-crisis boom as unsustainable as much as anyone did, and I’ve ranted about bankers’ antics since the turn of the Century. My big mistake was to underestimate how deep and wide the subsequent slump would run.

The pessimists, on the other hand, got greedy. Nostalgic for the fear and hysteria of 2008 – markets in turmoil, investment firms crumbling, gold soaring at last – they wanted more.

So they got furious at Central Bankers like Ben Bernanke for doing his job, and endlessly churned out prophecies of doom like so many rain-dancers.

I think some of these people underestimate just how big the blow-up has been, particularly in the US – it has seen nothing like it for 80 years.

On Friday we got an unexpectedly strong jobs report in the US – 195,000 net new hires, and revisions to last month, too. But as the next graph shows, the American recovery remains insipid compared to its super-virulent Alpha machismo of yesteryear: 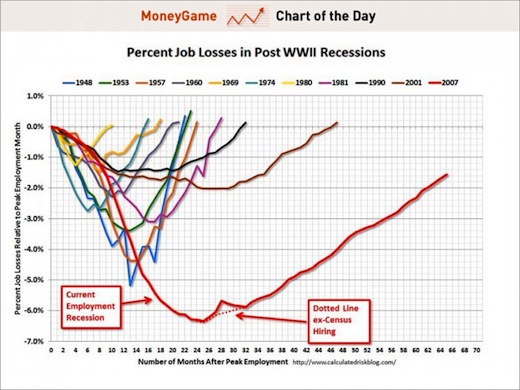 Look at that red line! Six years after the recession began, the US is still understaffed and hesitant. This has been carnage.

This is what the market’s retribution looks like, and if some of the wrong people have suffered – marginal wage earners, say – while the guilty prospered – a few of the 1%-ers, say – then tough tomatoes as far as investing is concerned. Complain to your politician, not to your broker.

Fact is nobody is very good at reading the economic runes, although like most investing maniacs I concede I have a meddling economist on my shoulder. (My other shoulder is even worse – there swaggers a midget day trader…)

The best thing for most people to do will always be to go passive and mechanical. Investment plans and economic punditry rarely mix, as Carl Richards put it this week in his usual style: 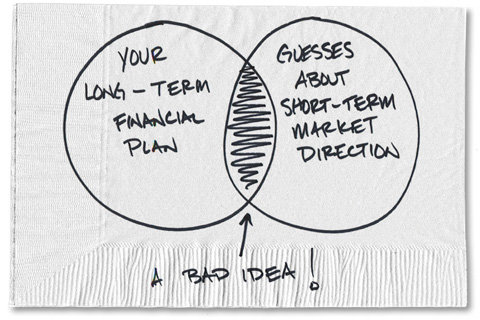 While it may be fun to chat about what the market might do next at your neighborhood barbeque, don’t kid yourself. What we know about the market comes down a bunch of guesses, also known as forecasts.

Forecasts about the future of the market are very likely to be wrong, and we don’t know by how much and in which direction. So why would we use these guesses to make incredibly important decisions about our money?

The answer is we shouldn’t.

If you must trade actively – and I admit I do – then look first (and more or less last) to valuations.

But better not to get involved. Have a passive plan, and enjoy the summer sun instead. 🙂

p.s. A reader tells me the Search Result links to the FT are still blocked by a firewall. When I click I get a survey question, which I then answer and it lets me read the article. I wonder if it’s happening to those of you who subscribe through email? Any clues or problems please let me know!

Product of the week: The latest LSE retail bond hails from property firm Buttonwood and offers a 6% yield on a bond that matures in seven years. The debt is secured against a range of properties in Northern cities like Manchester, but debt is high-ish, there’s no FCSS protection, and it should only be considered as part of a portfolio of corporate bonds. Here’s an easy-to-read information booklet and the tougher-going prospectus. [PDFs]

Note: Some links are to Google search results – these enable you to click through to read the piece without you being a paid subscriber of the site.

Book of the week: China isn’t only good at making iPhones – according to economist Michael Pettis, the crisis of 2008 was primed by imbalances in global trade, with China doing the heavy lifting. Is the The Great Rebalancing

Next post: The Slow and Steady passive portfolio update: Q2 2013