Admit it: You miss the market meltdown 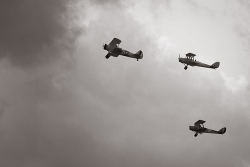 I have a confession to make. I’m feeling nostalgic for last year’s stock market mayhem.

I miss the bad old days — and I’m not the only one:

Of course, like school and hangovers, I realise it felt a lot worse at the time.

There’s nothing fun about seeing your net worth fall by 10% in a week, or to wonder if you’ll be eating baked beans and sheltering in an abandoned car factory by Christmas.

So why do financial nerds think back almost fondly to the great 2008 meltdown?

Why October 2008 was thrilling

Here are a few guess.

One reason may be a certain sense of schadenfreude.

For instance, having spent years warning that house prices were wildly overvalued (I really did, unlike the Johnny Hindsights) I couldn’t help feeling a little smug when the resultant credit crunch nearly brought Wall Street and the financial world to its knees.

Not very noble, but surely true.

Similarly, anyone living in New York or London has seen friends or enemies from University making a fortune in the financial services, when we know damn well most of them aren’t the smartest tools in the box — at least not to the extent that they should be millionaires by 35.

Our passion in the news

Another reason was the novelty of seeing something I read, think and write about every day become the topic of mainstream conversation.

I suppose terrorists get the same buzz when their cause gets shunted up the news agenda. (Hmm, that’s not a very flattering comparison, either!)

From everything I’d read about the stock market and my own experiences, I was sure the market was behaving irrationally last October.

It was exhilarating putting most of my uninvested cash into shares in the face of steep declines. True, I would have done even better waiting until the March sales, by which time my firepower was largely spent, but it was hard to believe that while the world ended on CNBC.

The meltdown matched my own circumstances

This one is more serious. At the time I was spending 12 hours a day in hospital, watching my father lapse in and out of coma (as I wrote here). Keeping up with the market meltdown (and ploughing through the massive Warren Buffett biography) in the hours I spent alone kept me sane.

Maybe the tumultuous backdrop also seemed appropriate – usually private tragedy is made even more alienating by the blue skies of worldly indifference, but in my case, everything did seem to be ending.

Making a drama out of a crisis

While I believe the credit boom had gone too far, house prices were (and remain) too high, recessions are a part of capitalism and that you can’t legislate away all market failure, I still appreciate the pain the stock market crash caused.

For me, it derailed my investment plans and reduced my near-term options. But many others have lost jobs and homes, and seen their families break-up.

These things can’t be avoided – all we can do is prepare for them in advance by saving up an emergency fund and investing for long-term income. But nobody wants to hear that when they’ve been made unemployed, and I don’t blame them.

I don’t know therefore how many Monevator readers will also secretly admit that last October was in some unspeakable way quite thrilling.

Certainly the financial media must suspect the once-a-decade spotlight has moved along.

Banking crisis maven Robert Peston of the BBC might urge us that the problems haven’t gone away, and therefore imply that we should keep reading him.

But Peston is surely soldiering on knowing the scoop of his career – the Northern Rock banking collapse – is behind him.

As for us investors, we’d do well to remember to be wary of our emotions, whether positive or negative.

For example, the guilt that I felt on losing money earlier this year might remind me to pay more attention to asset allocation as the markets return to normal — but if it scares me out of equities the emotion will be counter-productive.

Equally, trying to recreate the stomach-churning excitement of last year by day-trading mining companies or similar would likely end in ruin.

It is true, too, that many problems remain unsolved.

UK house prices are still above the level where I judged them too expensive (so I’m still down on that bet) and while I believe in this market rally, I don’t deny the speed of its advance leaves it vulnerable to setbacks.

Dripping money into an index tracker isn’t sexy, but it’s the best way to feed in the bulk of your investing funds over time.

Goodbye to all that

School reunions often remind you how glad you are that life has moved on, and hangovers stop most of us drinking too much, too often.

Let’s hope that after this trip down memory lane, the credit crunch will continue to fade into stock market history.

Like visiting Vegas, it was a guilty pleasure, but we certainly won’t get rich on it.