Seven surprising things you may not know about Warren Buffett 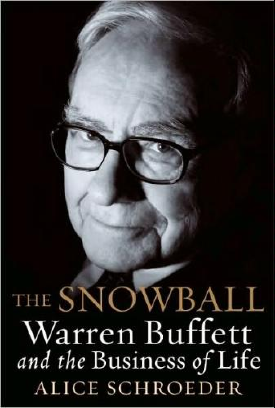 I have just finished the The Snowball

, the first biography Warren Buffett has cooperated with. It’s full of surprises, such as how Buffett had three leading ladies for two decades, and how his 1960s home was an accidental outpost of the counterculture.

But I’m more interested in how Buffett made his money. And while there’s few new facts about Buffett’s deals in The Snowball, the biographical format does put them into context. You get to see what makes him tick.

Here are seven interesting things I learned about Warren Buffett from The Snowball, and some ideas on how they can help your investing:

Buffet began obsessing over numbers as a child. He raced marbles with a stopwatch and calculated the lifespan of hymn composers when six-years old. He sold chewing gum at seven and Coca Cola when he was eight: the same year he began wearing a money-changer on his belt.

The takeaway: The power of compound interest takes years to work its magic. None of us has a time machine, so the main lesson is not to delay a day when investing for the future.

2. Buffett bought his first stock when he was 12-years old

Warren put everything his schemes had earned him into a stock, Cities Service Preferred, when he was 12. He also enrolled his sister, Doris.

Buffet was already learning how to hold shares through a slump

Takeaway: We all learn the same lessons. Buffett’s business partner Charlie Munger says that because Warren started thinking about odds, stocks, and goals before he was a teenager, he’s years ahead of the rest of us.

I used to watch share prices rise and fall on the Teletext TV service when I was 11 or 12. At the same age Buffett was learning real-world lessons on holding shares through a slump and selling too soon.

You’ll only discover whether you have the stomach to invest through a bear market or whether you’ll be sucked up by the next property bubble by being an active investor. Start with small sums, sure, but don’t delay that start.

3. Buffet lied, shoplifted, and played truant as a kid

This one was a real surprise. As a teenager Buffett revealed a wild streak. He says:

“We’d steal stuff for which we had no use. We’d steal golf bags and golf clubs. I walked out of the lower level where the sporting goods were, up the stairway to the street, carrying a golf bag and golf clubs, and the club was stolen and so were the bags. I stole hundreds of golf balls.

“I made up this crazy story for my parents – I told them I had this friend, and his father had died. He kept finding more of these golf balls that his father had bought. Who knows what my parents talked about at night.”

Takeaway: Even Buffett had to learn to be Buffett. I don’t know about you, but I found this heartening to read. Together with discovering that Buffett was a shy child who enrolled himself in Dale Carnegie’s public speaking course, it made him seem more human.

It’s easy to feel you haven’t got what it takes to make money. Some are born special, you might conclude. But Buffett’s history shows that even the world’s richest and most admired investor had to iron out his kinks.

Buffett’s history also makes me proud to be an outsider. Many of my college classmates entered the city or became management consultants, and have earned six-figure salaries for a decade. When property prices were booming, I’d sometimes wonder if I’d made the wrong decision by deciding to go it alone – even though I know that working a nine-to-five in an office and answering to some buffoon of a manager would kill me.

Discovering Buffett made being his own boss a top priority puts me in good company. I also suspect the unusual structure of Berkshire Hathaway grew out of Buffett’s non-confirming mentality.

You’ll often read that Buffett evaluates stocks as if he’s buying the whole business. What I realised after reading The Snowball was Buffett doesn’t do this because he’s an investor who thinks like a businessman. Buffett is a businessman who is also an investor.

Buffett’s record suggests investors should spend as much time reading about business and management as they do calculating P/E ratios. The trouble is, all manner of financial ratios are available at a touch of a button. Buffett’s sense of business value is far harder to emulate.

He really does! I was even more heartened by Buffett’s stinkers than by his golf ball robbery.

Some classic Buffett cock-ups include:

Takeaway: Mistakes happen even to the best of us. Sadly, having read The Snowball cover-to-cover I haven’t found a Buffett blunder to rank with my own worst investment (an iffy company called Homebuy that went bust overnight). But I saw plenty of examples where Buffett dusted himself down after an investment misfired and tried to learn from what went wrong.

Virtually all Buffett’s purchases of major insurance companies seem to have gone awry in the early years, for instance, and yet it’s by reinvesting all the cash thrown off by these companies that Buffett has maintained Berkshire Hathaway’s incredible growth rate.

The moral is to not despair when an investment turns out badly, but try to figure out what you can takeaway from it, as well as what you can salvage the situation.

In 1969 Buffett wrote to his investors that he was going to close their partnerships:

“I know I don’t want to be totally occupied with outpacing an investment rabbit all my life. The only way to slow down is to stop. I am not attuned to this market environment, and I don’t want to spoil a decent record by trying to play a game I don’t understand just so I can go out a hero.

“I do know that when I am sixty, I should be attempting to achieve different personals goals than those which had priority at twenty.”

Takeaway: What can anyone learn from this but humility? I already knew before reading The Snowball that Buffett wound down his partnerships in 1970 because he thought the market too over-valued to deliver an adequate return for his investors. That move alone would seal Buffett’s place in history among value investors, even if he had retired.

Of course, Buffett didn’t retire. He is still compounding his investments at an average rate of over 20% a year, nearly four decades later.

7. Buffett treats becoming the world’s richest man as a game

I couldn’t even begin to quote examples from The Snowball showing how Warren Buffett is in it for the scorecard, not for the payday: the entire biography is a testament to it.

No sports cars or private islands for Warren Buffett – even when he eventually bought a corporate jet he called it ‘The Indefensible’. For decades he bought suits from the everyman outfitter nearest his office, and his biography frequently mentions (and has photographic evidence of) his favourite threadbare jumper. And famously, his main residence is the first house he bought in 1961.

From setting that goal aged 11 of becoming a millionaire by 35, Buffett seems to treat investing as an intellectual challenge. He probably learned this from his great mentor Benjaman Graham, who seemed more bothered by being right than being rich, and for whom investing was just one of several high-end hobbies.

Unlike Graham, however, Buffett really cares about every penny. From ‘Buffetting’ a few cents off the price he paid for stocks to demanding his friends sell him shares they’d bought in companies he was interested in, right up to his close personal friendship with his rival for the title of world’s richest man, Bill Gates, Buffett really wants to have the biggest snowball.

If you were to say there’s something rather peculiar about chasing money as a means to an end, I could certainly see your point. But when the recipient chooses to leave virtually all $62 billion of his winnings to charity, it’s hard to complain. I’d rather have Buffett as the world’s richest man than the Salomon traders who almost destroyed his reputation.

Takeaway: Spend less than you earn and reinvest the difference in the stock market. Buffett may have lived a remarkable life, but that central practice is something we can all aspire to.

Beyond that, I don’t want to get too moral. I’m happy to live below my means, but can I honestly say I’d be happy with Cherry Coke and a steak from the local shop if my means were sufficient to buy up The Maldives or launch me into space? Unfortunately I’m not qualified to comment.

I do think my attitude is closer to Buffett’s than to the more visible of the cityboys I’ve seen in London over the past few years, for whom cash is flash. Also, Buffett’s self-containment from materialism – he calls it his ‘inner scorecard’ – undoubtedly helped him save and reinvest his money early on, and got his investing career off to a flying start in his 20s. You have to accumulate before you can speculate. Good luck rolling your own snowball.

I can’t recommend The Snowball enough for anyone interested in business and investing. Obviously, anyone interested in Warren Buffett should buy it too, but I imagine you’ve all got two copies already (one for your library and one for your bathroom). The book is seemingly always discounted at Amazon (click through for the latest price at Amazon US

or at Amazon UK

) so there’s no excuse. Except, perhaps, it weighs a tonne, so you might put your back out while reading it.

Next post: Government bonds: An exciting new way to lose money to the bear market

Previous post: How to spot a bear market bottom