Buffett: Why the property bubble bursting was a good thing 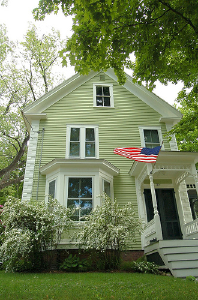 One of the most tedious aspects of the bursting of the property bubble has been the endless bleating that lower house prices are universally bad news.

In fact, lower house prices can be good news for at least two important reasons:

You can repeat these facts to homeowners and financial journalists, but the truth bounces off their skulls like moral justice off a banker’s back.

But perhaps they will listen to Warren Buffett?

In his 2009 shareholder letter, the World’s Sometimes Richest Man has channeled the dreams of every first-time buyer, as well as warning there will be no quick return to insane house price inflation.

Prices will remain far below ‘bubble’ levels, of course, but for every seller (or lender) hurt by this there will be a buyer who benefits.

Indeed, many families that couldn’t afford to buy an appropriate home a few years ago now find it well within their means because the bubble burst.

It’s a testament to Buffett that he says this despite owning the US’s largest producer of manufactured houses, Clayton Homes.

Describing the current state of the housing industry as ‘a shambles’, Buffett says it is paradoxically good news that US housing starts fell to just 554,000 in 2009, the lowest level in 50 years.

Again, note the difference between Buffett’s views and mainstream opinion!

People thought it was good news a few years back when housing starts – the supply side of the picture – were running about two million annually. But household formations – the demand side – only amounted to about 1.2 million. After a few years of such imbalances, the country unsurprisingly ended up with far too many houses.

Buffett explains there were only three ways to cure the overhang:

1) Blow up a lot of houses, a tactic similar to the destruction of autos that occurred with the ‘cash-for-clunkers’ program.

2) Speed up household formations by, say, encouraging teenagers to cohabitate, a program not likely to suffer from a lack of volunteers.

3) Reduce new housing starts to a number far below the rate of household formations.

Our country has wisely selected the third option.

Buffett says it will be another year or so before the residential housing market has been put to rest. And he thinks some problems will persists with high-value houses and those in certain localities where overbuilding was rampant.

Next post: Video: Tony Blair warns of the financial crisis