The 22 maxims of Sir John Templeton 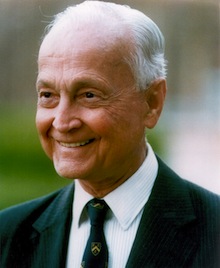 When it comes to legendary investors, Sir John Templeton was a legend’s legend.

Templeton is immortalised as the man who brought international investing to North Americans. Touring the world in his twenties – still a racy thing to do eight decades ago, at least out of uniform – Templeton was one of the first to see the potential of Japan. He backed its firms to the hilt.

Later he did the same with the tiger economies of South East Asia.

Templeton’s winning career as a fund manager and stock picker in foreign markets is immortalized in names like the Templeton Emerging Markets Investment Trust.

But there are plenty of other reminders from John Templeton’s life that can teach us about finding success as an investor.

The most famous of Templeton’s contrarian actions happened in 1939.

On the eve of the Second World War, when Templeton was all of 26-years old, he borrowed a then-massive $10,000. He had decided to buy 100 shares in each of 100 companies whose beaten-up stocks cost less than a $1.

Templeton judged the market was in headless chicken mode due to fears about the upcoming conflict. He wasn’t sure which shares would prosper. But he was convinced they were all trading out of whack.

The profits he banked when the markets recovered initiated a lifetime of running money.

Templeton had learned to read the emotional moods of markets by visiting cattle auctions during the Depression Era with a bargain-hungry older uncle. Perhaps economists would have quicker to get to behavioural economics if they’d spent less time with mathematical models and more time watching farmers yelling at each other!

Even with today’s knowledge though, it takes a rare mindset like Templeton’s to see opportunity on the cusp of a life-or-death conflagration.

Fast-forwarding 60 years, and Templeton was actively shorting the Dotcom Bubble. In his 80s! He was no perma-bullish Warren Buffett.

I’ve wondered before about the return sheets of the greatest old investors. Often there’s a presumption that their out-sized success comes courtesy of time and compound interest.

But to be actively betting against your grandkids’ smartest peers on Wall Street by shorting the most popular stocks – and winning – is something else.

What’s more, Templeton chose his targets in a cunning fashion. He studied the Dotcoms that had recently IPO-d, and looked for when the lock-in deals that restricted their freshly-minted founders from selling up would expire. Thus he anticipated who’d first dump their shares on the market. Kerching!

Passing on little stories about Templeton’s profitable exploits matches how I learned about the man myself.

I’ve never read an investing book about Sir John Templeton, in stark contrast to my other favourite investors. (Templeton passed away at the grand old age of 95 in 2008).

Rather, I found out about Templeton through mentions in unrelated books, word of mouth, and magazines and websites.

That’s how I came across Templeton’s 22 maxims for investing success.

These pointers are most applicable to active investors trying to beat the market.

But there are also nuggets that passive investors should appreciate, too.

The 22 investing maxims of John Templeton

1. For all long-term investors, there is only one objective: ‘maximum total real return after taxes.’

2. Achieving a good record takes much study and work, and is a lot harder than most people think.

3. It is impossible to produce a superior performance unless you do something different from the majority.

5. To put ‘Maxim 4’ in somewhat different terms, in the stock market the only way to get a bargain is to buy what most investors are selling.

7. Bear markets have always been temporary. Share prices turn upward from one to twelve months before the bottom of the business cycle.

8. If a particular industry or type of security becomes popular with investors, that popularity will always prove temporary and, when lost, won’t return for many years.

9. In the long run, the stock market indexes fluctuate around the long-term upward trend of earnings per share.

10. In free-enterprise nations, the earnings on stock market indexes fluctuate around the book value of the shares of the index.

14. Too many investors focus on ‘outlook’ and ‘trend’. Therefore, more profit is made by focusing on value.

15. If you search worldwide, you will find more bargains and better bargains than by studying only one nation. Also, you gain the safety of diversification.

16. The fluctuation of share prices is roughly proportional to the square root of the price.

17. The time to sell an asset is when you have found a much better bargain to replace it.

18.  When any method for selecting stocks becomes popular, then switch to unpopular methods. As has been suggested in ‘Maxim 3’, too many investors can spoil any share-selection method or any market-timing formula.

19. Never adopt permanently any type of asset, or any selection method. Try to stay flexible, open-minded, and skeptical. Long-term results are achieved only by changing from popular to unpopular the types of securities you favor and your methods of selection.

20. The skill factor in selection is largest for the common-stock part of your investments.

21. The best performance is produced by a person, not a committee.

22. If you begin with prayer, you can think more clearly and make fewer stupid mistakes.