Walter Schloss: His rules that beat the market 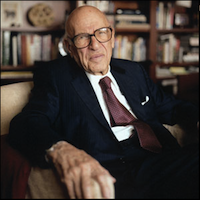 Anyone cited by Warren Buffett as a super-investor is worth knowing more about. Walter Schloss is one such man.

Walter Schloss was born in 1916. He began working on Wall Street at aged 18, while the stock market was still recovering from the Great Crash.

Schloss took investing classes from Benjamin Graham, who also taught Warren Buffett. He went on to work for Graham’s fund (where he met Buffett) before setting up his own partnership in 1955.

Schloss was an excellent investor:

Nice returns if you can get them!

Most super-successful investors must change their tactics as their funds get larger. Schloss invested for fewer than 100 clients. He was therefore able to invest in small companies and special situations throughout his career.

His investing style was pure Benjamin Graham. In Warren Buffett’s 1984 essay, The Superinvestors of Graham and Doddsville, Buffett wrote:

He owns many more stocks than I do — and is far less interested in the underlying nature of the business;

By age 80, Schloss hadn’t changed much, according to Buffett’s biography, The Snowball:

A few chapters on we find Schloss is still playing tennis at 90. That definitely qualifies him for the Great Old Investor club!

The rules of Walter Schloss

If you’d like to follow in the footsteps of Walter Schloss – to try to beat the market rather than ‘merely’ tracking it – then you’ll want to know how he invested.

As a pupil of Benjamin Graham and a fellow traveller of Warren Buffett, Schloss was obviously a value investor. Your first port of call should therefore be Ben Graham’s The Intelligent Investor

Like all investors who do what’s supposedly impossible and beat the market, Walter Schloss had his own quirks though.

In 1994 he typed them up onto a single sheet of paper. No book, no speaking tour – just 16 bullet point guidelines.

And here they are, near-verbatim. May they help make you rich!

According to Smart Money, Walter Schloss was still running his own portfolio as of April 2009, aged 95.

Next post: Using a watchlist to improve your investing