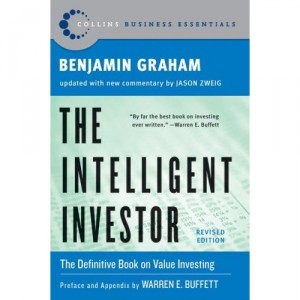 Any reader who hasn’t yet read The Intelligent Investor

by Benjamin Graham is advised to put down this blog and pick up his classic book. It’s 50-years old, yet it has an uncanny knack of being relevant for each new generation.

Known as ‘The Dean of Wall Street’, Graham was Warren Buffett’s mentor and an intelligent buyer of unloved companies trading at less than book value. A child of the Depression, Graham’s label for these companies were ‘cigar butts’; he’d look for one with enough value left in it to get a last puff by realizing its assets.

Living through the Wall Street Crash of 1929 gave Benjamin Graham insights into value investing, and bull and bear markets. His ‘Mr Market’ parable is still cited; it resurfaced in the Buffett biography The Snowball

I re-read a passage from Graham last night that’s less well-known, and that offers further advice about ‘ignoring the noise’, as a modern blogger The Oblivious Investor puts it.

The true investor scarcely ever is forced to sell his shares, and at all other times he is free to disregard the current price quotation. He need pay attention to it and act upon it only to the extent that it suits his book [i.e. portfolio], and no more.

Thus the investor who permits himself to be stampeded or unduly worried by unjustified market declines in his holdings is perversely transforming his basic advantage into a basic disadvantage. That man would be better off if his stocks had no market quotations at all, for he would then be spared the mental anguish caused him by other persons’ mistakes of judgement.

I tried to say the same thing in my post about buying in bear markets but it took me thousands of words. It seems unfair Graham should be both a brilliant writer and an investing legend!

In Graham’s day, noise was the tittle-tattle of gossip around Wall Street bars and subway stations and daily newspaper reports. What he’d make of CNBC is anyone’s guess.

Incidentally, in grabbing the Amazon links for the books above, I noticed a new edition of Graham’s ‘serious’ work, Security Analysis. Perhaps I’ll get it for Christmas!

If you’re intent on guessing when the bear market has ended, you might want to read more recent oldie Jim Slater’s advice.

Next post: Do you run a tight ship or are you just a tightwad?

Previous post: Should the government stop dumping money into a giant hole?