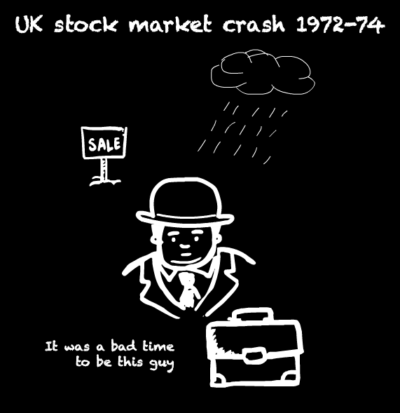 The coronavirus crash was bad and the Global Financial Crisis unfolded like a horror movie.

The 1970s slump had it all. A property market bubble, secondary banking crisis, massive oil shock, falling pound, rising inflation and interest rates, industrial unrest and global recession were the toxic feedstock for a rampant bear market that inflicted bigger losses than those sustained during either World War or the Great Depression.

This chart of the FT 30 index of UK stocks sums up the sinking feeling: 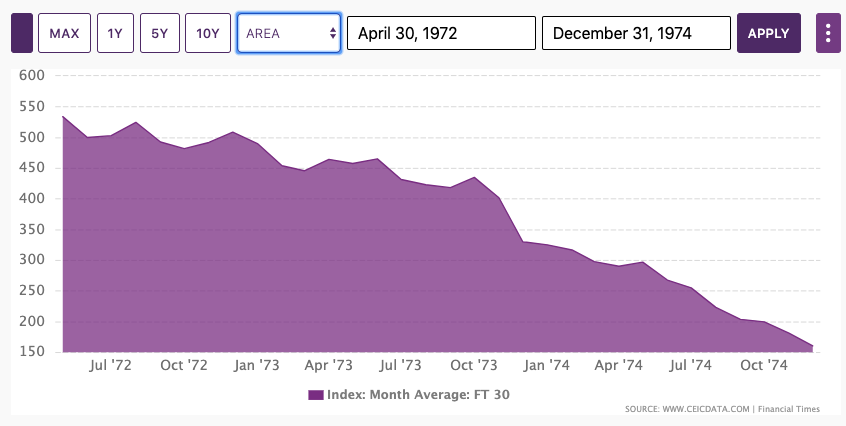 Not even the -52% bursting of the dotcom bubble could compare with this meltdown.

What the hell happened?

The trouble starts: May to September 1972

The drama begins in May 1972. The UK gives up defending sterling’s peg to the dollar in the face of a widening trade deficit and draining currency reserves. The pound begins a new life as a free-floating currency and heads down. (A direction we’re all familiar with today.)

Inflation and the Bank of England’s (BOE) Bank Rate creep up. The Office Of National Statistics (ONS) records CPI inflation at 7.2% and the BOE’s main interest rate at 7.6% in 1972.

After a summer rally, the market heads into correction territory in September. It’s down more than 10% since May.2

We’re five months into the decline and it’s curiously gentle in comparison to the -32% elevator drop we took in the first month of the coronavirus crash.

According to a BOE paper that raked over the ashes of the crisis, rents were rocketing in the early seventies. The supply of office space had been strangled by planning restrictions since the late sixties.

This set off a chain reaction that led to a massive bailout of UK banks called ‘the Lifeboat’.

First, the planning controls were loosened by Edward Heath’s Conservative Government (1970-1974). Faced with a stagnating economy, they also turned on the credit taps as part of a stimulus known as the dash-for-growth policy. But the UK’s industrial sector was slow to take up the easy finance terms and the vacuum was filled by property developers keen to make a killing in Britain’s hottest sector – commercial real-estate.

This heady, fast-buck cocktail was spiked by the vodka of ‘secondary banks’. An emerging category of loosely-regulated lenders (sniffly referred to as ‘the fringe’ in the BOE report), these secondary banks borrowed short on the money markets and lent long to the developers.

Few questioned the strategy as long as the fringe could keep financing their liabilities. However, the risk was building.

The stock market opened in 1973 just 5% down from its peak back in May. But things went south from there.

The BOE described the first six months of 1973 as:

The UK’s trade deficit expanded in 1973 to -2.2% of GDP. That seems routine to us now but it must have seemed mammoth at the time. Nearly 30% of the economy then was accounted for by manufacturing as opposed to just 10% today.3 We were well on our way to our worst trade deficit in the last half century, as the gap accelerated to -4.4% of GDP in 1974.

Inflation (9.4% CPI) and interest rates (9.2% Bank Rate) continued rising through 1973 as the Bank tried to dampen the overstimulated economy.

The stock market deteriorated along with everything else. Finally we hit bear country in August – down 22% over the 15 months since May ’72.

The market really walked off the cliff from October.

The UK had already tipped into recession when The Arab-Israeli Yom Kippur War began and ended in October.

The US and Soviet Union sat like trainers in opposite corners – backing their respective fighters – when the Arabs unleashed their oil weapon on the Americans and their allies.

The OPEC oil cartel cut supply to the US and immediately hiked prices by 17% in mid-October. The oil price was to quadruple by March 1974, deepening the global recession. North Sea oil was still in its infancy and couldn’t cushion the UK economy from the price shock.

The double-headed beast of a falling pound and swelling inflation forced another interest rate rise in November. The stock market took a 16% hit in that month alone and passed 30% in losses since the peak.

Then, somewhere in Threadneedle Street, someone must have muttered, “It can’t get any worse,” because at that moment it did…

Commercial rents had been frozen by the Government in December 1972. That squeezed real-estate profits, while rising inflation and interest rates made the business of lending to secondary banks with risky exposures to the property market look dubious at best.

The pressure came to a head in November ’73 when London and County Securities could no longer raise fresh loans on the money markets.

The BOE’s report, The secondary banking crisis and the Bank of England’s support operations, records:

It very soon became apparent that some more sophisticated depositors in the money markets were taking fright at their potential exposure to any such institution.

The Bank thus found themselves confronted with the imminent collapse of several deposit-taking institutions, and with the clear danger of a rapidly escalating crisis of confidence.

This threatened other deposit-taking institutions and, if left unchecked, would have quickly passed into parts of the banking system proper.

Behind closed doors, on 28 December, the Bank quietly launched ‘the Lifeboat’. This rescue operation would eventually prop up 30 secondary banks, and be recalled by veterans witnessing the run on Northern Rock nearly 34 years later.

Back on Main Street, OPEC doubled the oil price on 23 December. In a Christmas to remember, Edward Heath declared The Three-Day Week. This restricted the use of electricity by businesses, with predictable consequences.

It would blackout Britain from midnight 31 December.

The oil shock, fear of contagion in the banking system, grinding recession, crumbling property values, and industrial poison of The Three-Day Week were backdropped by a ballooning inflation genie that refused to be bottled by tightening interest rates.

The miners upped the ante in February by voting to go on strike. Their battle against the Government pay cap and wages that lagged inflation had led to Edward Heath’s Three-Day Week, as the Prime Minister sought to conserve the coal supply that fuelled Britain’s power stations.

Heath sensed an opportunity to checkmate his political enemies and called a general election in February. Drawing the battle lines in stark terms, Heath asked the country: ‘Who governs Britain?’

The voters responded: “Not you, mate!”

The Conservatives lost their majority. Britain returned its first hung parliament since 1929 – and the last until 2010. It seems the mischievous British electorate does love a bit of political paralysis in a crisis.

Harold Wilson entered Number 10 at the head of a minority Labour Government in early March. Chancellor Denis Healey – whose topiary-free eyebrows delighted a generation of school children – then administered some stiff medicine in his March Budget:

The stock market delivered its verdict – a 21% drop in March. The largest monthly fall of the entire drawdown.

We were 22 months in and the market had lost 50%, surpassing slumps in both World Wars, The Great Depression, and the 2008-09 Financial Crisis that lay in wait.

After a brief respite in April, and after two years of decline, the market went on its worst run yet: a five-month losing streak from May to September. This knocked another 37% off equities.

Meanwhile, the UK’s banking crisis took on an international dimension. Massive foreign exchange losses and fraud shook confidence in the financial system across Europe and the US.

As fear mushroomed, the BOE increased its liabilities as:

There was still a significant risk that an isolated default by a UK bank, in the highly charged atmosphere of the time, might have triggered a chain reaction.

Rumours spread in November that one of the four main British banks – the NatWest – was on life support from the BOE. The NatWest issued a denial. In a remarkable sign of the quaint times, that quashed the rumours as opposed to inflaming them, as would surely happen today.

Another sign of the times was Denis Healey notching up a hat-trick of Budgets in 1974, with Labour scraping a slim majority in the October ’74 election. The market greeted that development with a further downward leg of -18% from November through December – finally hitting bottom on 13 December – with a real return loss of -73%.5

1974 was the UK stock market’s worst single year since 1900. The following stats (courtesy of the ONS and Sarasins) sketch the economic conditions that crushed business and investor confidence:

The rent freeze was finally lifted in December ’74 and property prices began to rebalance. Unemployment continued to rise in 1975 but the market snapped back that year with the mother of all mean reversions – a 99.6% real return.6 The rebound made 1975 the greatest annual performance in UK stock market history (dating from 1900).

However a 73% loss requires a 270% gain before you return to the black. After 32-months the market had only touched bottom. It would take another nine years to breakeven again in real-terms – a milestone passed in 1983.

Hopefully you and I will never experience anything like the 1972-74 stock market crash. But it’s a cautionary tale of the tape that shows what can happen, and why equities will only reward those who can handle the risks.