The US may be about to see another surge in Covid-19 deaths. This is clearly tragic from a human perspective. We might also wonder what it will do to the market.

I’ve been pretty relaxed about the UK’s de-lockdown. Daily cases have steadily fallen, contrary to – soon forgotten – warnings at every stage that we were moving too fast.

Indeed it was probably only around 4 July that we went much past where I’d have set the limits for the actual lockdown! Albeit partly with the benefit of hindsight.

My hunch is 90% of the heavy lifting of preventing a rapid escalation of Covid-19, at least in summer, comes from basic social distancing and hygiene, and perhaps wearing masks inside.

Throw in today’s testing capacity – spectacularly absent back when many of us thought we had the virus – and it looks to me like enough to at least keep the situation contained.

Shutting down the economy, paying extra billions in furlough, not leaving the house more than once a day, keeping lovers apart for three months – I doubt it made much more difference. We should have focused instead on ring-of-steeling care homes. From day one it was the elderly who were clearly most at risk.

Early, when total cases are very low, maybe extermination from a heavy lockdown is an appropriate goal. Maybe if you’re going to get a 15% hit to GDP you might as well take a 20% hit and try to wallop the thing on the head. Fresh flare-ups in Australia and Hong Kong reinforce my doubts on that score, but even experts debate this – and I’m far from that!

But I still believe the case for uber-lockdown ignores myriad unforeseen costs and consequences.

Something I learned from Tim Harford this week is called the identifiable victim effect.

For example, after the Fukushima nuclear disaster in Japan, hundreds of thousands of people were made to relocate from their homes for years on end.

Obviously, right? Nobody wants citizens getting sick from radiation.

Right, except it’s now thought relatively few lives were saved by the relocation. In fact it’s possible more evacuees killed themselves from the emotional wrench of separation and upheaval than would have died from radioactive fallout.

At least 50 suicides have been recorded. And there will have been tens of thousands of smaller tragedies, from job losses and broken relationships to farms falling into disrepair.

It’s all incredibly sad – but try making that argument when the Geiger counters are going haywire. I’m sure I’d have relocated them, too. Most politicians wouldn’t hesitate.

Still, I know that one thing all1 readers of this website will agree on is that Covid-19 is not a hoax…

…that being asked to wear a mask isn’t a plot to turn us into communists.

…and that saying a less full-on lockdown might have been more proportionate doesn’t mean I’m saying we should do nothing, or pretend the virus isn’t happening.

Yet, incredibly, swathes of Americans appear to have reached exactly those conclusions. A lunatic fringe apparently even believes ex-President Obama created the virus and is spreading it.

(So this is how democracy dies. Not with a bang but a “WTF? Really?”)

You can understand why the saner end of this happened. The US is a huge country. Much of the US was in lockdown when it probably didn’t need to be. Local lockdowns and exclusion zones might have been more pragmatic, and caused less frustration. Although this is with hindsight – I imagine the US health officials didn’t expect things would eventually go so far off the deep end.

Anyway, the end result is the virus seems to be taking off rampantly again.

I have tried to stay open-minded about this. In particular the US is now doing over 600,000 Covid-19 tests a day. It’s a truism (not a Trumpism) that if you increase testing in a pandemic you’ll find more carriers. So it was plausible that part of the surge in US cases was down to the huge ramp in testing.

(Imagine if we’d been able to test everyone in London over a few days in early April. We might have found half a million people with the virus!)

As you test more people though, what you don’t want to see is the percentage of positive results going up. That means you’re not just finding more Covid-19 carriers through more tests – it also implies there’s a growing number of them out there.

And what you really don’t want to see is daily deaths go up. 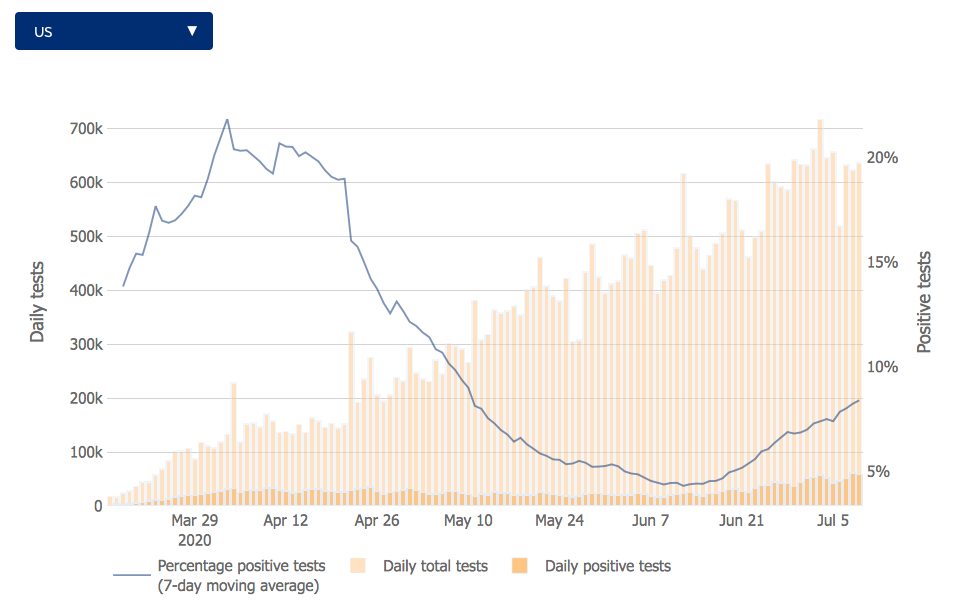 This might not have been definitely terrible. I suspect young people have had enough of putting their lives on hold for something that will only badly affect a tiny minority. When respected US medical figures say as much as 50% of the US population will probably have had Covid-19 by the end of the year, you might well ask why not get it over with? Sure enough, the average age associated with a positive result has been getting younger in the US.

However, the counter-argument to the ‘let rip’ thesis is that eventually the pandemic ebbs up to and kills a swathe of the vulnerable.

And in my daily chart checks, that’s what I’ve noticed may now be happening: 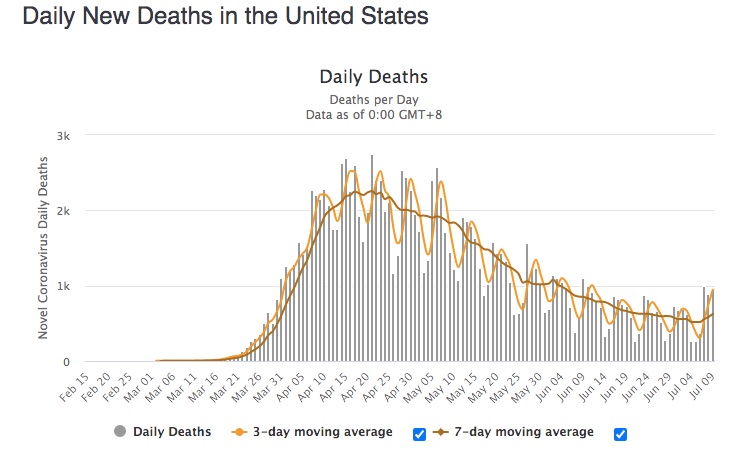 (Click to enlarge: Notice uptick at far right-hand side)

Two questions for the market.

Firstly, is this uptick just an artifact of the natural history of the virus?

I’ve noted before it’s still not clear why thousands die in some places and other places get off fairly lightly. Maybe Covid-19 has taken a while to get embedded in some larger and more clement US environs? This is grim news for people living in such places. But it could mean a nationwide resurgence isn’t inevitable.

Secondly, is the US effectively going for a Swedish approach? Not openly stated, but de facto.

Again, this always seemed a plausible endgame to me with a virus this transmissible, and yet apparently ultimately harmless to most. The cost of repeated shutdowns is just too great.

It’s worth noting that for all the wailing and gnashing of teeth, the Swedish approach has sort of worked.

Yes, before *you* say it, plenty of people have died. As I always reply, we’ll only see in the end how premature much of this death really was.

But more importantly for this discussion, many were arguing in April and May that only stringent lockdown could curb the spread of the virus.

The Swedish experience, painful as it was, seems to show that’s not true: 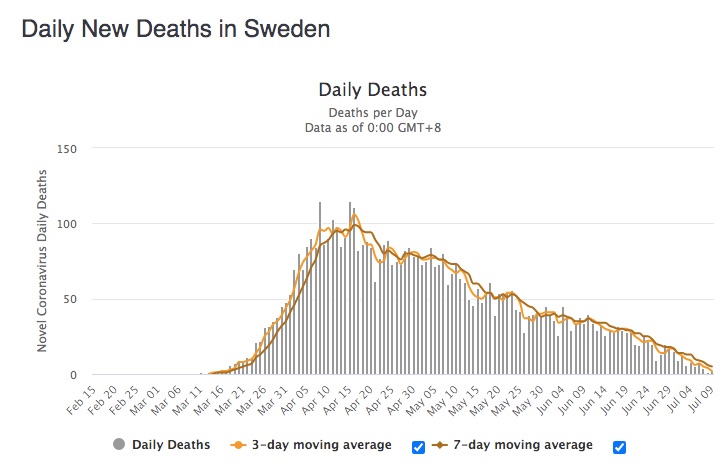 Through one lens Sweden’s approach looks like a failure. It comes fifth ranked on deaths per capita from Covid-19. (Though that’s still better than lockdown-happy Britain at third).

But this isn’t the argument I’m making here. I’m simply saying a looser policy that accepts the virus will spread and run its course isn’t a catastrophic policy from the set of bad choices on offer.

The US may be about to find out, one way or another. Frustratingly, I could see the market taking this news either way.

Bluntly and economically-speaking, it probably fears another fully-loaded economic shutdown more than a higher death tempo among the elderly.

On the other hand, a return to New York-like scenes on the news is hard to square with a recovering economy let alone buoyant share prices – even if the very worst fears and tail risks of this pandemic have now been lopped off the distribution graph.

Hold on to your hats (/allocation to bonds and cash). Things could be about to get bumpy.

From the archive-ator: The investor sentiment cycle – Monevator

VAT cut for restaurants, pub meals and hotels: what will it mean for you? – Guardian 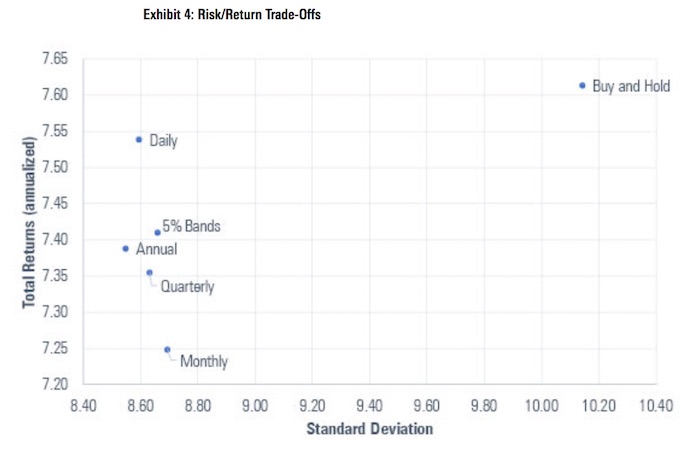 How much will people get in the ‘Eat Out to Help Out’ scheme and where can you use it? – Metro

Will your local John Lewis be closed down? Eight are going, putting 1,300 jobs at risk – ThisIsMoney

Is it crazy to own gold? – Value Stock Geek

Is it possible to save too much money? – Money Maven

Dead people don’t get to retire – A Teachable Moment

Safe bonds are the best diversifier for stocks… – Morningstar

…but on the other hand  [US but same difference] – Alpha Architect

The danger of learning from your mistakes – Validea

The bear market in happiness – A Wealth of Common Sense

The nerdy, contentious, and existential debate raging inside one of Britain’s biggest funds – Institutional Investor

Charlie Songhurst: Lessons from investing in 483 companies [Podcast] – Invest Like The Best

First-half review: Running up that hill – IT Investor

Why hasn’t the UK seen a second wave? – New Scientist

Patricia Lockwood: Insane after coronavirus [Beautiful and poetic] – The London Review of Books

Alchemy: The Surprising Power of Ideas That Don’t Make Sense by Rory Sutherland – £0.99 on Kindle

When Genius Failed: The Rise and Fall of Long Term Capital Management by Roger Lowenstein – £0.99 on Kindle

“How I became a poker champion in one year” – The Atlantic

Regrets – Of Dollars and Data

“The lesson is that no amount of sophisticated statistical analysis is a match for the historical experience that ‘stuff happens’.”
– Mervyn King, The End Of Alchemy