by The Investor on December 13, 2012
How to value the stock market

There are many ways to try to forecast the future level of the stock market – at least one for every ten articles you could write about it.

But almost all these methods of making stock market predictions are useless.

At worse they’re downright dangerous, because bogus predictions can scare you out of your investments.

But don’t take my word for it that making stock market predictions is best done by Gypsy Rose in a tent at a fairground.

Vanguard has provided some proof.

The quest for predicted returns

Vanguard’s data was outlined in its recent report: Forecasting stock returns: What signals matter, and what do they say now?

It broke down the forecasting methods into different sub-categories – with a control based on US rainfall – as follows:

12. Building-block model with trend growth (a combination of 3 and 4 above).

13. Building-block model with consensus growth (a combination of 3 and 5 above).

Simple or “unconditional” mean-reversion in returns

16. Trailing 10-year average U.S. rainfall. (Hypothesis: This should have no relation to future returns.)

Vanguard’s researchers fed each of these into their regression analysis to come up with a measure of ‘predictability’ for each variable, versus the actual real return from the US stock market.

For example, here’s how it treated the trailing dividend yield (variable 3 from the list above):

The regression is designed to estimate to what extent the dividend yield on the U.S. stock market in year “t” has explained the variability of the rolling 10-year real return for the years t+1 through t+10.

In this way, the regression is specified so that an investor would not have to guess at the future of the independent signal (here, the dividend yield) in order to alter her forecast for stock returns over the next ten years.

In this sense, the regression is estimated “in real time,” although the statistics we report are in-sample results, meaning that we measure each variable’s predictive ability over the entire data set.

Vanguard measured such predictability over one-year-ahead and 10-year-ahead horizons. It used data going back to 1926 to see how closely each variable predicted the future level of stock market.

What did Vanguard’s researchers find?

Vanguard’s boffins reported back that most of the variables they studied were about as helpful as asking your dog for one bark or two to tell you whether the market was headed up or down.

The following graph shows how the different variables it studied were correlated with the future return: 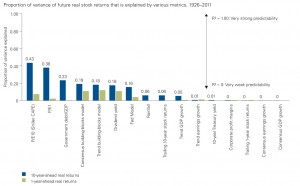 Click to enlarge to see those prediction failures in full

This graph is just incredible to me, even as a committed skeptic about the value of pundits pontificating about the economic outlook and so forth – at least when it comes to stock market returns.

Remember, the R-squared figure shows how strong the predictability of any particular variable proved over the one and 10-year forward periods.

And most of the variables showed the predictive power of an 8-ball!

Look at corporate profit margins, for example. How many times have you heard somebody state that “profit margins are too high, and so the market must come down” in the past year?

Yet corporate profit margins were found to have ZERO predictive potency. That’s even worse than guessing future returns from the level of US rainfall!

It’s also telling that GDP growth – another statistic beloved of financial talking heads – had virtually no ability to predict future returns from shares.

The only half-decent indicator was the P/E ratio, with the cyclically-adjusted P/E 10 measure doing a marginally better job of forecasting returns then the standard P/E measure.

But even this was pretty weak, only explaining about 40% of the future return on a 10-year basis.

As for the short-term, the grey bars show that no measure was much cop at predicting next year’s stock market return.

That’s even worse then I’d have expected. If you’d put me on the spot before I saw this research, I’d have imagined that a low P/E for the market might give some clues on a one-year basis, but in reality the correlation is pitiful.

The ten-year figures for P/E are better, as I say. Perhaps this suggests even cheap markets take a while to become more fairly valued.

Why do most variables not work?

I believe the average person looks at the stock market and the news headlines and makes a huge error of omission.

They forget that hundreds of thousands of people – and vastly more computers – are seeing exactly the same information.

In my opinion, that is the main reason why most of these prediction methods are useless.

If you see the BBC reporting that UK GDP is going to fall next year, for example, then you can bet that the signs of a slowdown have been coming for months. By the time you see Huw Edwards on the Six O’Clock News beginning his grim recount, share prices will already have changed to reflect the drop in GDP. And by then it’s probably too late to profit.

For example, “everyone knows” some particular emerging market will grow strongly over the next decade, but an investment there proves mediocre over that time frame because it was already priced in at the start.

A further probable reason for the failure of these indicators is that their supposed utility is widely known.

“Quants” and algorithmic traders have crunched this data to death before you’ve even crunched your morning cornflakes.

Good luck seeing something before them!

Why can price/earnings successfully predict, a bit?

This still doesn’t explain why P/E seems to at least partly predict future returns from the stock market, however.

After all, the price to earnings ratio and the notion of buying cheap are hardly the world’s best-kept secrets.

I think there are a few reasons why P/E has worked much better – though far from well – as a predictor, compared to other variables.

One is that P/E directly combines the two most important variables of a stock market investment:

Combining the two gives us a direct measure of value. Looking at earnings over a ten-year basis (i.e. PE10) potentially smooths out some of the peaks and troughs.

This is in contrast to say the variable “consensus expectations of GDP growth”, which is many levels removed from the value of your investment.

Secondly – and crucially – the P/E ratio is inherently contrarian, at least when used as a sort of value Geiger counter, where low P/E is taken to indicate a potential bargain.

I said one reason most methods probably fail is because the information is too widely known to everyone in the market.

And the same is true of P/E.

However, a stock with a high P/E is popularly thought to be more attractive, by definition, than one with a low P/E rating. Investors are prepared to pay more for a high P/E stock’s earnings.

Similarly a stock – or a stock market – on a low P/E ratio faces more pessimism about its outlook.

By it’s very nature, when you buy an out-of-favour company, you’re betting against the crowd. And that tends to be rewarded in investing, because it means you’re likelier to be buying an undervalued asset

The takeaway for me from this study of stock market prediction methods is my usual one – that valuation is what drives future returns, not news headlines.

Buying cheap is the best way to generate superior returns from investments. That doesn’t mean buying rubbish, it means paying less than the intrinsic value of whatever asset you’re shopping for.

Most market pundits are only important to us in so much as they scare other people out of assets, and so give us more chances to buy cheap.

I do concede it might be possible for hedge funds or other sophisticated investors to find new data that better predicts future returns, and to profit from it until that information becomes widely understood.

It’s probably also possible to combine existing data in complicated ways to create new valuation methods that may do a better job of predicting returns for a while, or for managing risk. The Vanguard academics have only shown us here that the simple rules of thumb are generally useless for prediction. They haven’t proved it’s impossible.

But super analytical number-crunching isn’t a game us ordinary investors can play – and as a group hedge funds have tended to lag the simplest stock/bond ETF portfolios, anyway. So arguably you’re not missing much!

Passive investors can once again proceed smug in the knowledge that their method of index tracking provides the best way of ignoring all this irrelevant noise.

As for active investors engaged in stock picking, it’s further evidence that if you spend 15 minutes considering the macro economic outlook instead of company fundamentals, you just wasted at least 14 of them.