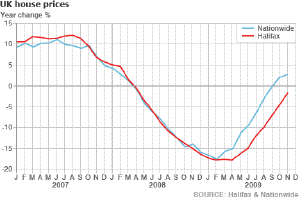 I have rounded up a bunch of house price predictions for 2010, to follow up my article on the likely fate of some first time buyers after the great UK house price crash stopped crashing (as shown in the BBC graph to the right).

These predictions aren’t wildly useful. It takes years for bearish sentiments to play out (Capital Economics was looking for a UK house price crash in 2004, as I recall), while the big banks are loathe to predict anything worse than stability (predicting losses implies more writedowns).

However, predictions can be thought provoking if not actually useful, as well as a bit of fun – we can tune in next year to see who was closest, and perhaps over a few years find a decent soothsayer.

My own gut feeling would be for an increase of around 5%, based on only mildly rising base rates and a strengthening UK economy (I think unemployment is probably very close to peaking).

I’d say though that the risks are more to the downside, because of the potential for an interest rate shock.

Got a prediction to share? Tell us below, with a link if it’s not your own. 🙂

Next post: Kraft’s sweet Cadbury deal is a bitter blow for would be British Buffetts