by The Investor on September 20, 2013
How to value the stock market

The straight P/E ratio is a poor forecasting tool when applied to the stock market.

Even the ten-year cyclically-adjusted P/E ratio isn’t much cop, although it’s probably the best of a poor bunch of crystal balls should we be silly enough to try to outwit the market. (Reminder: Such guesswork is decidedly optional, especially for passive investors!)

There is an exception to the bit-of-a-crap-shoot principle, though.

Developed markets on very low P/E ratios have nearly always been amazing buying opportunities. If the P/E of the stock market ever again falls below 8, I’d buy all you can. Then sell your grandmother and buy some more.

The reason for the juicy returns are pretty obvious – on a P/E ratio of less than 8, the market is pricing in cataclysm. So far the worst hasn’t happened to Western markets, so anyone who was brave enough to buy when shares were at such bargain basement levels has been well rewarded.

Remember some markets don’t make it. The Russian and Chinese stock markets in the early 20th Century went to zero! If they passed through a P/E of 10, 8, or 2 on the way down it didn’t make any difference – you still lost all your money. There is always a risk of something similarly awful happening in the future, and that risk is essentially what buys your returns.

Absent a communist revolution though, a very low P/E ratio buys you a huge margin of safety, and a lot of future earnings on the cheap.

More interesting – and maybe more surprising – is what happens with returns when you buy above the “a P/E of what? Is that a misprint?!” range. These higher P/E ratios are a matter of practical importance, because you’ll far more often see a market on a P/E in double-digits than on a P/E of <8.

In fact, if you only invest in the market when P/E ratios are at the bottom of the barrel, you could be waiting for decades to strike – and depending on your selling rules you could be out again within a year.

Most of the time you’ll need to pay higher P/E multiples for your ongoing equity fix and the superior returns that shares can deliver. But how much is too much?

The following graphic from City Research sheds some light with respect to the S&P 500 index of leading US shares: 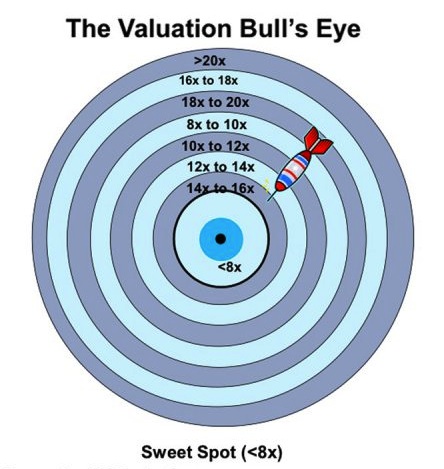 The higher the average returns, the closer the P/E band to the bulls eye!

This graphic ranks P/E bands based on the average subsequent 12-month returns since 1940. Citi Research’s Tobias Levkovich crunched 73 years worth of S&P 500 returns data to produce it, dividing returns into bands by P/E rating1, and putting the higher performing bands closer to the bulls eye.

Remember: The Vanguard research I linked to at the top of this post showed P/Es have a poor record of forecasting market returns. I highlight this data to show that very cheap is good, and very expensive (a P/E above 20x) has been poisonous. It’s also useful to see that, as I speculate below, low to mid-teen P/E ratios have not historically been a reason to bail out of stocks. But don’t mistake this for a solid prediction machine. (There isn’t one).

Looking at the dartboard, as you’d expect from my comments, very low P/E ratios are associated with the highest average returns the following year.

With a P/E below 8, you’re paying less than $8 for every $1 of earnings (for an earnings yield of 12.5%). When you buy the market at such fire sale prices, there’s a strong chance that good things will happen!

It’s a bit different with individual companies. A company on a low P/E ratio might well be correctly priced because its business is in difficulties, or because its profits will never grow much. Sometimes that’s not the case – that’s why the value premium exists – but pretty often it is, which is why we’re not all millionaires from simply buying low P/E shares.

A P/E of 8x or less for the whole market is another kind of animal. Here you’re buying a slice of all the earnings of all the companies. Your investment will be driven by the largest companies, sure, but you’re still getting a lot of diversification, and lots of companies that will recover, as well as the deadbeats.

For that reason, I’d argue a low P/E market is a very different bet to a single company on a lowly P/E rating, and a much surer indication of value.

Of course this could just be a reflection of what the Vanguard study found – that you can’t learn much from P/E ratios.

But I can’t help wondering if it reveals a little bit more?

By implication, markets sporting P/Es in the 8-10x range proved, with hindsight, on average more expensive buys, whereas the 14-16x band was on a short-term basis a solid buy.

Once the P/E ratio gets above the 8 threshold, median returns for the S&P 500 over the next 12 months creep higher and higher, but they don’t peak until the 14-16x range.

Above 16x they swiftly collapse again, on a median return basis. And if anyone ever calls the market a screaming buy on a P/E of over 20x, scream back at them. (And keep your money away!)

What gives? Is this random, or can we speculate about why the more expensive P/E ratios are delivering higher 12-month median returns?

Very possibly not. Even 70 years of returns only encompasses a few market cycles, and the stock market constantly reacts and changes, too. It might have been luck that the data fell this way, and even if it wasn’t that’s no guarantee it will hold in the future.

Remember too that these are averages and median figures. They will conceal big variations, including negative periods of returns where shares were in the dumpster for the following 12 months.

One thing it does tell us is to be wary of people who warn of imminent crashes just because the P/E ratio has gone up from a lower level.

Looking at the data, a higher P/E ratio has been associated with higher median returns all the way from 8-16x. The data doesn’t necessarily imply any inevitable smooth rise like that – but I do think it’s one in the eye for the doomsters who claim markets are expensive just because they’ve bounced off their lowest levels, especially with interest rates so low.

Finally, if I put my speculation hat on, I think it’s a good reminder that cheapness isn’t the whole story.

I’d hazard a guess that P/E ratios of 14-16x are associated mostly with expansionary phases for economies. At such times, people are getting more confident and bidding up shares – remember, the market discounts the future, not the past – but not yet to crazy bubble levels.

Because stock markets climb slowly but jump off a cliff on the way back down, I doubt the market spends much time in the giddy 14-16x band unless the news is at least fairly optimistic.

To return to the individual shares analogy, paying a P/E of 14-16x for the market is the equivalent of stock pickers who look for Growth At A Reasonable Price (or GARP for short).

GARP investors want to see further expansion and higher profits ahead. They don’t want to pay through the nose for it, because they believe very high rates of growth are not typically sustainable for long enough to make up for paying a very high multiple on purchase. But modestly high P/E ratings are a positive with the GARP methodology, since it indicates the expectation of higher earnings.

It comes down to the ‘E’ part of the ratio – the earnings. Higher earnings will bring a P/E ratio down – or hold it steady – just as surely as lower prices (the P) part will. So if you think earnings will rise, you might bid up for them in advance.

People are far more obsessed with fluctuating share prices than with the prospects for underlying earnings, so they often forget this.

P/E is not a prediction

Remember that as well as being extremely difficult, valuation isn’t the same as forecasting.

One weakness in this study, to my eyes, is that the subsequent returns are just tracked for a year. Most of us should be investing with a far longer time horizon if we’re in shares. A 12-month period of slightly lower returns doesn’t matter if it means we’re all set when things pick up after that.

As always, I think most people are best off ignoring all this and investing passively. But for those who do want to flex their inner Master of the Universe, I think valuation – as in not paying over the odds – is a better path, and a better use of this sort of data – than trying to forecast short-term returns.

Some may say I’m quibbling over semantics and it amounts to the same thing, but I think the mindset is different: I believe an active strategy based on trying to get a good deal when you buy is one that will serve you better than a strategy that tries to guess what the deal will be in a year.

Next post: Weekend reading: Taper down the irrelevant talk