Valuing the market: Are shares cheap?

Hearing that I’m one of those oddballs who is still investing in the stock market, people ask me things like “Are shares cheap?” or “Is it a good time to put money into an ISA?”1

Invariably I waffle in reply that regularly saving into a cheap diversified portfolio over the long-term is a good practice that sidesteps such concerns.

But if the questioner is more sophisticated – or more persistent – I may venture a view that a particular market looks cheap or expensive, in my opinion.

‘Sophisticated’ here means experienced enough to have heard such views hundreds of times before – and so hopefully formed the opinion that they’re not worth very much, especially in the short-term!

(The most sophisticated investors are arguably those who ignore all this kerfuffle due to the evidence that it probably won’t give them any edge, and so invest purely passively instead).

However one fellow – a Monevator reader, to boot – surprised me the other day when he asked me what we actually mean when we say ‘shares look cheap’?

Over this series of posts, I’ll outline some of the ways you might hear people arguing that the stock market is at bargain levels, grossly expensive, or something in between.

I’m not going to consider the present state of the market. I want this series to be more of a reference guide than a one-off market call. You can then use the methods described in whatever market conditions you face in the future.

You can evaluate along with the rest of us!

Price is not the answer

Firstly, let’s look at what doesn’t work, at least for private investors like us. And that’s technical measures based on prices.

To my knowledge nobody can consistently predict and profit from short-term stock market moves. If you hear some pundit saying for example that the market has advanced “too fast” and so we “are due for a pullback next week” ignore them. They don’t know anything you don’t know. (On this evidence they may know a lot less).

I don’t personally believe that stock markets are totally efficient. There’s evidence that momentum exists in prices, for example.

But that doesn’t mean I think it’s easy to profit from short-term gyrations in the overall market. Quite the opposite!

Investing in shares is not unique in this respect.

Imagine you’re an expert in antique furniture. If I put a tatty old chest of drawers up for sale in the newspaper small ads for £20 and you realise from my description that it’s a Georgian antique, you’re well placed to make a profit.

If I auction it, however, the chances are others will spot its value, and bid against you. This activity itself can draw more expert traders to the fray. I may be ignorant about antiques, but this process means my lot should still sell for around the going rate in a public market.

Ah, but what is that going rate?

As an expert in classic furniture, you will have a view. You might exit the auction early because “prices look toppy”. Alternatively, you might laugh maniacally as you strap the drawers onto your roof racks, muttering to anyone in earshot that: “the market is temporarily depressed, but one day true value will reassert itself”.

You sound very knowing. But a year or two later, you may be saying the same thing as my drawers gather dust in the corner of your shop.

Fashions come and go. Your expertise in old furniture was enough to tell you that my chest of drawers was Georgian and you knew such items had traded at a high price in the past. But it didn’t give you any omnipotent clairvoyance about whether and when other buyers would pay what you consider a fair price for Georgian drawers in the future.

The odds may be on your side. Your knowledge of both antiques and fashion trends – and even the mood of your fellow dealers – all help.

But there’s no certainty.

Prices are adrift without an anchor

This is all very familiar to investors in shares.

In the years immediately after the dotcom bubble burst, you’d often hear pundits urge others into the market on the grounds that the FTSE 100 was 10% or 20% or 30% down from its high.

But this simple 10%-off type answer to the question “are shares cheap?” proved a poor guide to the future level of the index. Twelve years on and the FTSE 100 remains below its high of late 1999.

Some markets might never return to what you once considered a reasonable price (as I have found to my cost with London house prices). Many people are late to buy into recovering stock markets because they become anchored to a low price point, and forgo gains while waiting for a retrenchment that never comes.

They get scared because the market has risen 20%, but who is to say it was fairly priced then? Perhaps it was excessively cheap?

Going on pure prices/levels isn’t much use, then, whether you’re buying a new Art Deco sideboard or wondering whether now’s the time to put your inheritance into a UK tracker. If the FTSE 100 was once 6,500 and it’s now 5,500, it’s not at all evident from these numbers whether the old level was too high or the new level too low, let alone where prices will be in the next year.

Head too far down this road and before you know it you’re a chartist looking for triple candlesticks up your golden Uranus as you try to simplify an inconceivably complicated summation of opinions about every company in the index. 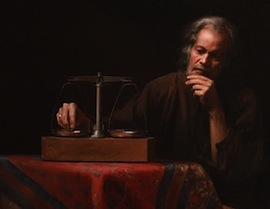 Don’t get me wrong – every investor looks at stock market graphs, even if they don’t admit to it. Even passive investors take solace from graphs showing the UK stock market climbing remorselessly over a hundred years or more.

I am not immune to price anchoring and other behavioural quirks, either. But personally I try to fight the daily impulse to consider shares cheap or expensive based on the absolute level of the index.

Instead, if you want to reach an opinion about whether the market looks cheap or expensive (and remember, that’s very much optional to a good investing plan) I believe you need to try to value it against something more fundamental.

And here’s a big difference between investing in antiques and buying into the stock market – one that’s often missed by newcomers to shares.

If I buy a FTSE 100 tracker, then I am buying a slice of all the future earnings of the FTSE 100, which I hope to be paid through a regular dividend and/or a rising price due to companies reinvesting their profits. Both earnings and dividends tend to rise over the long-term, not least due to inflation, so if I can wait long enough I’ll likely be rewarded.

In contrast, my Georgian chest of drawers either goes up in price, or it goes down.

Okay, technically speaking, my drawers provide a functional utility that has a value that ownership confers. You can store underpants in them, for example. More subtly, you can also show off your wealth by putting them in your living room (my drawers, not my underpants, though I can see the confusion).

If you didn’t buy my antique drawers, you might have to go to IKEA to get storage for your pants, and frame and display a bank statement to show off your wealth.

However I think it’s fair to say most of the premium in an antique over a sturdy knock-off is in the expectation of the value to be realised through a future bid2.

Such an expectation isn’t groundless – real assets tend to appreciate ahead of inflation over time, which is why investing in quality furniture, houses, stamps and even art can help preserve your wealth. But the utility value you’re gaining from it is a lot more vague than the dividend yield you get on a basket of shares.

And however long you wait, I don’t think you’ll ever get what you paid for your 1970s avocado bathroom suite.

Ways to value the market

In short, we need to relate the level of the market to some other value – such as those company earnings or the dividend yield – in order to see if it’s reasonably priced or not.

I’m not the first to reach this conclusion, unsurprisingly. Over the years, many different rules-of-thumb have been devised to try to decide whether shares are cheap or expensive.

The rest of this series will highlight some of the more popular ways you may hear being used to value the market according to these so-called fundamentals.

None of these methods gives you a silver bullet solution to timing a market.

Hedge funds crunch tens of thousands of variables and still they run off a cliff in a year like 2008. To expect a simple ratio to give you a solution to the age-old quest for the holy grail of market timing is bonkers.

That said, I don’t think it’s folly for someone to decide to take an overall view on whether shares look good value, and to tweak (not wantonly trade) their allocations accordingly.

The academic evidence is that most investors would historically have done better to stick to fixed asset allocations and rebalancing as opposed to attempting market timing. But for those of us who do dabble with the dark side, these valuation methods may collectively cast a little light and help us to do better.

At the very least, after reading this series you’ll be able to decode even more City-speak when you hear it!