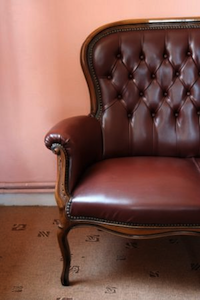 The mother of a girl I was once vaguely involved with saw me lustfully admiring her… antique furniture.

(You were worried for a moment there, weren’t you? She was a handsome woman, but I only had eyes for her daughter.)

Back then, I couldn’t really tell art deco from Art Garfunkel. The nearest I got to owning furniture was a Habitat mattress that I threw onto the honey-colored floorboards of the decaying Georgian townhouse I rented with friends.

“No matter darling!” she said. “We can’t all be so lucky. One day you’ll be very rich, and when you are you must promise me you’ll buy only antique furniture so your children will be rich, too!”

I’m still waiting to be very rich, and I’m afraid the only furniture I’ve bought in the 10 years or more since then was from Ikea (mainly because after a five-year standoff with the UK property market, I’m still renting).

Yet her advice has influenced me in thought if not action, especially as I’ve heard (and seen) it repeated elsewhere.

And when I finally do buy my own property, I’ll certainly choose antique furniture or classic design pieces whenever I possibly can.

Why you should buy antique furniture

There are several reasons to buy iconic or antique furniture:

This being Monevator, it’s that last factor we’re most interested in here. For all her refinement, it’s the reason why my ex-girlfriend’s mother was so keen on the old stuff, too.

Of course, I suspect she didn’t buy much of her own furniture, as is the tradition amongst old money. Who can forget the aristocratic MP Alan Clarke’s snobby put down of self-made Swansea-born millionaire Michael Heseltine:

“He had to buy his own furniture”.

I’ve no truck with that sort of elitism (not least because my roots are humble too!) but I think it’s a good idea to do what the rich do, from investing with the Rothchilds to keeping an eye on how they spend their money.

And they buy antique furniture, art, and collectibles because they have tended to at least hold their value in line with inflation, if not outperform.

Compare that to a table or bed from IKEA. While I think IKEA’s design know-how is underrated, the fact is you’ll be lucky to give away your flat-packed furniture after a couple of years.

Modern furniture is a consumable good, not an asset.

How well has antique furniture kept its value?

One source I’ve read about a few times is the Antique Furniture Index (AFI), which tracks the price of 1,400 typical (rather than exceptional) pieces of furniture.

According to this antique blog entry from 2008: 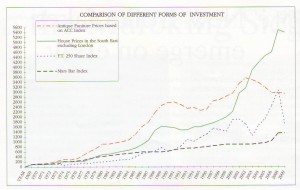 The source includes the graph pictured right at this same low-resolution, which I presume has been scanned in from the AFI original.

If your eyes are good, you can see it shows the AFI tracking the FTSE 250 until 2007, then holding flat while the latter plummets. House price inflation (the green line) continues to do its gravity defying thing.

According to the Antiques Trade Gazette, since then things have got worse:

Hopes of a recovery in the value of antique furniture have been dealt a blow after the Antiques Collectors’ Club’s Annual Furniture Index (AFI) saw prices fall by seven per cent during 2009.

The biggest ever 12-month drop in the index, it reflects lukewarm bidding at auction and thin trading at retail outlets.

A bear market for antique furniture?

It’s probably not surprising that antique furniture prices have fallen.

If I recall correctly, 2008 was the first time on record that the Sunday Times Rich List got notably poorer. The worldwide recession hit everyone, though the rich have since bounced back.

Some people believe that antique furniture is going out of fashion, but I think that’s unlikely. It’s true the masses of ‘dark wood’ furniture that used to clog up old English houses had to be shipped abroad to find bigger homes in the US, or was even chopped down to size.

But in a world where there’s ever more rich people and a finite supply of old stuff, I think antique furniture will prevail in the long term.

The blog I cited above gives an illustration of what’s possible:

We have a piece of furniture at the moment that was made in about 1760 and for all intents and purpose is a chest of drawers. This piece was sold to its previous owner in 1963 at the Grosvenor House Fair in London for £2,250.

It has been used every day for the last 40 odd years and we have just sold it on for 2,600% more than it was bought for in 1963. Try that with something contemporary!

I think the same will be true over the next 40 years, albeit with a few wobbles along the way.

Where to start with antique furniture

A big perk of living in West London is the plethora of antique furniture dealers, as well as the famous Portabello Road market in Notting Hill. As a result of such fantasy shopping, I’ve grown frustrated I’m still renting my home!

I could start buying antique furniture now, but I’d rather wait until I’m finally in my own place. Renting and moving is cheap and fairly carefree. It won’t be the same when I need a truck and specialists to transport my beloved chairs, mirrors and wardrobes.

The enforced delay has also enabled me to develop an eye for what I like, and to get over the ‘sticker shock’ of some of the nicest pieces, which are invariably the ones that will best appreciate in value over time.

Everyone says that as with art you should buy furniture you like, as well as what will hold its value. Buying antique furniture isn’t like investing in shares or bonds – you actually have to live with this stuff!

There’s realms of information out there on choosing antique furniture, much of it pretty elitist. But this Telegraph article is packed full of useful tips on where and what furniture to buy.