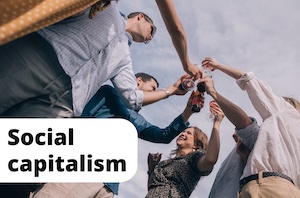 Surrounding yourself with rich friends is a well-known strategy for making more money.

By spending time with rich friends, the theory goes, you will automatically:

In my 20s, I read through books about making money the way others of my generation popped certain feel-good pills.

And most of those books urged their readers to abandon friends who had a ‘poverty mindset’.

Instead, you should look to have rich friends going places.

What’s more, the modern networked economy has made it easier than ever for unsociable techno-nerds to make serious money. Just think of all the crypto-millionaires who mined made-up money in their basements.

But for most of us, moving in wealthier circles will raise our expectations – and potentially our bank balances.

A rich vein of study

There’s plenty of scientific research to back up this folksy-sounding advice.

To give a recent example, in a major study published in 2022 a team led by Harvard economist Raj Chetty studied the social networks of more than 70 million Facebook users to see if they could correlate their social capital with their financial wealth.

As Business Insider reports, out of three ways of measuring social capital:

…the only one actually linked to upward economic mobility is friendships with people from a higher socioeconomic status.

In fact, if lower-income kids grew up in areas that have the same economic connectedness as higher-income kids’ neighborhoods, their future earnings increase by an average of 20%.

According to Hugh Lauder of the University of Bath, Chetty’s research is a call to ensure schools are well-mixed in terms of socioeconomic background – albeit that’s difficult given how some parts of the country are far richer than others.

The alternative – an educational system where a lot of rich kids are segregated into their own schools – is bad for social mobility. (And for our politics).

One kink I noticed from the New Scientist reporting is that the Harvard team estimated income levels via the proxy data of each Facebook user’s mobile phone model.

More than 15 years as a personal finance blogger makes me wonder – were some of those apparently upwardly-mobile friends of richer people just flashing a fancy handset to keep up appearances?

Presumably the academics eliminated the risk of such social striving from affecting their results.

There’s just one snag with the strategy of having richer friends, especially in childhood.

I’ll illustrate it via a slightly stylized story about an ex-girlfriend.

My ex – let’s call her Catherine – is a talented violin player. From the age of seven, she showed great promise with the instrument. By her early teens she was established as the best bow in town.

Catherine enjoyed being the lead violinist in her school orchestra. But she knew she could push her talent further than her school could take her. Most of her friends might as well as have been banging on saucepans for all they could inspire her.

Catherine’s teacher agreed she was being held back. He arranged for her to go to weekend classes in London at a fairly prestigious music school.

At last she’d be among musicians of her own caliber!

To cut a long story short, they were indeed better than her – and she didn’t like it one bit. No longer was Catherine the biggest fish in a small pond. In fact, by her own estimation she was the worst musician at the new school.

Catherine continued to attend the classes, because she was too ashamed to retreat to her old school colleagues. But she admits that her heart wasn’t in it. When she went to university, she didn’t even bother to join the music society.

Could Catherine have tried harder? Perhaps. Many people respond to competition, but some are too timid. A shy person, Catherine wilted in the light of others.

Yet the fact is she can play beautifully compared to 99% of people who ever pick up a violin.

Rich friends when you need them

If Catherine had never gone to the elite music classes, she’d probably have had a happier childhood. She might still be playing her violin today.

Similarly, you will make more money if you meet rich friends, but you’ll likely feel miserable.

Researchers from Warwick Business School in the UK found that people who earned more than others in their “reference group” – that is, those of the same age, gender, religion or nationality – were more likely to feel happy with their lives.

Warwick professor of behavioural sciences Nick Powdthavee said that people actually care “very little” about the actual figure they earn, but they are concerned with how their income compares to those around them.

“For example, their sense of wellbeing is more likely to be influenced by whether they are fifth or 40th highest-paid person in their workplace, rather than their precise salary,” he explained.

So do you want to be rich or would you rather be happy?

Perhaps the best solution is to decide who your real friends are – as distinct from who is in your wealth creation circle.

Spend quality time with your true friends for a pick-me-up, and hang out with your rich friends when you see your income sliding!

Next post: Weekend reading: Did you miss the best days?

Previous post: Our updated guide to help you find the best online broker