Warning: buying a flat in West London will cost you thousands a year more than renting 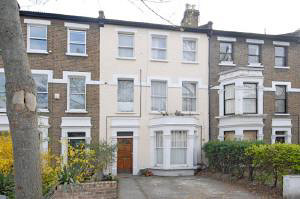 A friend (let’s call him Peter, which is nicer than his real name) has bagged a pay rise from the BBC. Well done Peter.

(Incidentally, Peter’s job is to shepherd the flocks of so-called ‘runners’ you find clogging up TV and film sets. If you’re ever at such a media palaver, you can easily spot the runners: they’re the ones standing still. ‘Loiterers’, ‘texters’, or ‘sullen coffee guzzlers’ would be more appropriate. That said, they’re young and paid bugger all, so we’ll let them off. Our warmongering ‘Defence Ministers’ are harder to forgive).

Peter is now thinking about buying a flat, afraid he’ll be the last person renting come the university reunion, and hankering for seagrass flooring. He’s also got an inheritance of around £40,000 to blow (my estimate – we are British, after all, and I reached my understanding of his financial position via a steady exchange of ‘ums’, ‘around’s, and frothy pints of Kronenburg).

Should Peter buy a flat, or continue renting?

We did the maths on (and in) the area where he currently lives, the invented land of ‘Brackenbury Village’ in Hammersmith. It’s a fairly nice slice of non-descript central London terraced housing, with a few good pubs and restaurants and the Goldhawk Road buffering residents from wild estates of Shepherd’s Bush to the north.

Cost of renting in W6

Cost of buying in W6

We found several one-bedroom properties for sale in the same sort of streets in Brackenbury Village, of what appeared to be the same standard as the rented flats:

Mortgage cost: Repayment
Let’s assume £290,000 as Peter’s purchase price, a three-year fixed mortgage at 5.85%, and that he puts down £40,000 as a deposit. According to one lender’s repayment mortgage calculator (sorry, no link until I figure out how to make some pennies from it – they’re making their billions without me adding to their coffers!):

Mortgage cost: Interest Only
So already buying looks about 35% more expensive than renting. However, it’s not really a fair comparison, as even though Peter would take out a repayment mortgage, a truer comparison with rent is to compare with the cost of an interest only mortgage (since in both cases, as renter or interest only mortgage payer, the capital sum isn’t being repaid.)

That’s not as bad – only about 13% more than the cost of renting.

Loss of savings income
But wait, there’s more. Remember Peter put down £40,000 as a deposit? That’s money that was hitherto earning 6% interest in his online bank account, where it would continue to do so if he rented. I make it £2,500 a year in gross forgone interest, though Peter will pay tax on that, quite possibly at 40%. Let’s play safe and assume the interest income he loses by buying is £1,500 a year.

Monthly that works out at £125 per month, making buying about £275 more expensive than renting.

Cost of wear and tear
Still not all though… What happens when the roof falls in? Or the walls need repainting? Or the boiler goes? Estimates of the cost of maintaining a property run from 0% of the value of the property (amateur Buy To Let brigade) to 10% (overly cautious folk who keep their money in gold coins under double sprung mattresses).

Let’s call the cost of wear and tear / upgrading with the Jones’ at 0.5% per annum, and assume Peter does most of the work himself (whereas Peter the Renter puts his feet up and watches the landlord refitting the kitchen, or perhaps works overtime and saves for the property slump). Maintenance works out at (a hugely optimistic, I’d say) £1,450 a year, or £120 a month.

Buying looks some 40% pricier than renting

In total then, buying, even with an interest only mortgage, works out a conservative £395 a month more expensive than renting the equivalent property, or in percentage terms about 40% more expensive. It’s a similar premium to that I found comparing renting and buying larger London properties.

Don’t forget too that Peter would have to pay Stamp Duty tax of 3% on buying his one-bedroom flat (nearly £9,000 for the properties we’re looking at here) with legal and financing fees certain to push his costs over £10,000.

When it’s so much more expensive to buy than rent, why do people still buy? Because prices have gone up for a decade and they want some of that action, clearly.

If this confidence is punctured – as one day it must be, by a recession or an interest rate spike – then there could well be a hefty correction. Equally, if the property market sails on untroubled, then dove-ish wallflowers like Peter (and your author) could find themselves renting forever (Peter) or biting the bullet and paying even more of a premium to buy (your author, who is currently staring down the market like a mongoose sticking its tongue out at a 40-foot boa constrictor).

Personally, I think it’s a scandal that the government has allowed a trebling-in-a-decade property boom to turn home ownership from a common aspiration into a lottery. But friends query my card-carrying capitalist papers when I mount that particular charge, so I’ll explain why I think the market should be rejigged in favour of young homeowners versus Buy to Let investors another day.

Next post: What everybody needs to learn from recent immigrants