by The Investor on May 3, 2012
How to value the stock market

Companies have good and bad years, which temporarily elevate or depress their earnings1 and so skew their P/E ratios.

When added to the vagaries of forecasting, this prompts some investors, led by 1930s legends Graham and Dodd, to instead compare prices with average earnings across multiple years (taking into account inflation) to derive a cyclically-adjusted P/E ratio (also known as CAPE).

By comparing a company’s current multiple-year P/E ratio to its historical average, you can then try to decide whether the shares are cheap without being misled by short-term blips.

Ten years seems to be the most favoured timescale, though some people work with five or even three-year histories.

What a company earns in any particular year is dependent on many different factors. These range from how well it executes its business plan and the trading conditions in its sector to the performance of rivals, the mid-life crisis potential of the MD, and even dumb luck.

But nearly all companies’ earnings are also affected by the ups and downs of the business cycle.

Stock market indices are just a collection of listed companies. When you add up a weighted average of the earnings generated in a single year by all the companies in a particular index, individual factors such as management skill or new product developments just disappear into the noise.

On this aggregate view, the earnings total varies mostly with the wider economic cycle, since nearly all companies are affected by it to some extent.

Earnings are cyclical: Over a period of years, the total earnings from all companies in an index will tend to rise during economic expansion, and fall sharply in slowdowns or recessions. For successful companies, the trend will be upwards over the decades. But most will suffer setbacks en-route.

If companies are cyclical, so are stock markets

Because earnings are cyclical, we might decide to calculate a rolling P/E for the whole market based on an average of multiple years of earnings, just as Graham and Dodd did for companies.

The resultant cyclically-adjusted P/E ratio is most often calculated over ten-year periods. It’s often known as PE10 as a result, which is less of a mouthful!

PE10 is also dubbed the Shiller PE, in honour of the US academic Robert Shiller, who popularized PE10 when he used it to predict the stock market crash of 2000 on the basis of an elevated P/E ratio versus ten-year earnings.

But whatever you choose to call it and however many years you look at, the idea is the same – to try to see if a market looks good value compared to history, perhaps also by considering where you think we are in the economic cycle.

(The start of) the trouble with PE10

I want to stress immediately that in that last throwaway comment is one of the big problems with PE10: It’s rarely clear what the economy will do in the next year.

In the absence of a functioning crystal ball, we are left with forecasts, best guesses, and playing the odds if we want to try to time our entry and exit into the stock market by the PE10 measure.

Given that capitalist economies have historically tended to expand for more years than they’ve contracted, you might decide to assume any current expansion will continue into the near future.

But be under no illusions. Boom and bust will never be abolished, and some years you’ll find an apparently healthy economy collapses out of the blue, taking company earnings with it.

I’m not going to tell you how to calculate an accurate cyclically-adjusted PE ratio.

I’ve never personally done the maths, and others have explained in great detail how they calculate PE10 if you’re keen and something of a maths masochist.

Unfortunately for lazy souls like me though, PE10 data is hard to come by for almost all markets, as far as I’m aware.

The exception is for the S&P 500 in the US, where many people track the PE10 ratio. There’s even a regularly updated graph plotting PE10 for the US index: 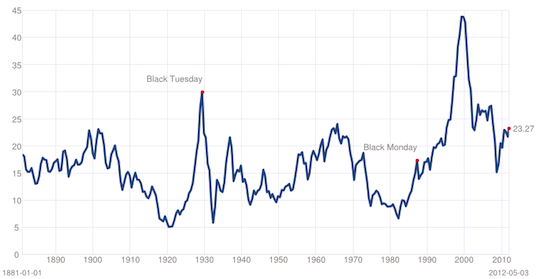 PE10 for the S&P 500. Yes, most of the falls look obvious in retrospect, but they're not so clear at the time. (Chart from multpl.com)

You sometimes see investment banks quoting PE10 ratios for the UK market, but I don’t know of a go-to source. Macro hedge funds and the like compute this sort of data for themselves, but they don’t make it publically available.

Richard Beddard of iii provides a somewhat jerry-rigged version of PE10 for the FTSE All-Share index. Another UK blogger used to offer self-calculated updates of a shortish-run PE10 ratio for the UK. Sadly his last post on the matter was in summer 2011.2

If you know of other sources, please do share in the comments below.

Not the droid you’re looking for

I wouldn’t get too caught up on seeking a spurious level of accuracy when looking at PE10, anyway.

A figure from a reliable-sounding authority quoted in the press is good enough for me for six months or so, assuming no major earnings shocks in the interim.

That’s because I doubt that PE10 is the fine-tuned timing tool that certain of its adherents claim it is. I therefore don’t need it to three decimal places.

Just as one year’s earnings are a unique event, so are the past ten years. A longer-term timescale is usually better in the mean-reverting world of investment, but there’s no magical reason why looking at ten-year data suddenly becomes extremely accurate for forecasting.

As I write in 2012, for instance, the ten-year history includes two big earnings collapses, one of which was the largest since the Second World War. That’s unusual, and the ten-year history might therefore be unduly depressed, in turn over-inflating the PE10 ratio. I think the next ten years could be better.

On the other hand, perhaps earnings over the past ten years were illusory, having been fueled by credit expansion in the first half of the decade that led to unsustainable consumer spending and indebtedness. If so, then to what extent we still need to work off the excess remains to be seen.

Moreover, many companies took on too much debt in the go-go years. The PE10 ratio looks at market capitalisation not enterprise value (the latter would factor company debt in the numerator, the ‘P’ part of the ratio), so it doesn’t tell you anything about changes in balance sheets.

Again, this is another hindrance to the usefulness of looking at ten-year figures.

To counter that point in turn, some of the most indebted companies went bust or were radically devalued in the slump (property companies, for instance). Perhaps ongoing earnings will be of a higher and more sustainable quality, justifying a higher PE10 ratio?

I could go on. The point is that contrary to what some imply, PE10 will not see you dive effortlessly in and out of the market like a seagull stealing chips.

Even Professor Shiller concluded his original paper with humility, warning that PE10’s apparent predictive abilities might just be a coincidence.3

My point here isn’t to tell you the market is cheap or expensive. It’s to warn you that cyclically-adjusted PEs may be a useful tool, but I don’t think they’re the silver bullet they’re sometimes touted as.

PE10 became much more popular in the choppy post-2000 investing climate, not least in the light of Shiller’s seemingly vindicated prediction. Understandably (if optimistically) people looked for ways to better time their entry into the stock market, and to get a sense of when to take money off the table.

There has been some research suggesting a valuation-based timing strategy might improve risk-adjusted returns compared to fixed asset allocations, but the margin seems slender to me.

“Shiller’s method is fine in a bear market when people feel compelled to justify low prices, and had it existed, PE10 may have worked okay prior to 1950 when dividends were high and earnings payouts were also high.

If you look at a [chart] of real earnings growth and real price growth there wasn’t much from the mid-1800s to the mid-1900s. But there was dividends.

After 1950 […] fewer companies paid dividends (only about 30% of companies pay dividends today), and the dividend payout ratio is also low (about 35% today).

Since the 1960s people have expected earnings growth due to earnings reinvestment and stock buybacks, and they got it. So, today, PEs should go higher than the 125 year ‘average’ PE 10 when the economy begins to recover.”

Taking another tack, my blogging friend Mike at Oblivious Investor has pointed out that if PE10 worked in the past, then it probably won’t in the future. This is because such inefficiencies tend to be ironed out once they become well-known.

As for me, I think valuations do matter to future returns, and PE10 gives us another way of measuring them.

But I also think that the average person – and quite possibly everyone else, discounting for luck – is poorly placed to make a finely graduated call based on it.

In the March 2009 stock market lows, for example, what looked a high PE10 ratio compared to the bear market bottom of the 1970s was frequently given as a reason to steer clear of US equities.

The US market went on to double within less than three years!

For those who do want maths to tell them what the market will do in the future, the excellent Moneychimp offers a simple calculator that uses PE10 to estimate future returns for the US market, and also to adjust for dividends.

It’s a bit larky, which is how you should treat PE10 in my opinion.

A useful measure, in perspective

Personally I keep an eye on both simple and cyclically-adjusted P/E ratios. But I don’t take either too seriously.

Making up some numbers for a fictitious market for illustration: I wouldn’t sweat it if a market was on a PE10 of say 20 versus its historical average PE10 level of 15. But if its PE10 got towards 25 for any extended time in this illustrative instance, I’d consider that fair warning.

Your own mileage may vary. Passive investors are strongly advised to ignore the whole sideshow in favour of fixed allocations and mechanical rebalancing, except perhaps at times of seemingly extreme over-valuation – the year 2000, say, not the hindsight overvaluation of 2007.

And those don’t come along very often.

Next post: Weekend reading: Should personal finance be taught in school?

Previous post: Should I dump my government bond funds?