The stock market capitalisation to GNP (or GDP) ratio

One way to try to judge whether the stock market is cheap or expensive is to compare the valuation that investors are putting on companies with the output of the economy.

You can do this by comparing the total stock market capitalisation of a country with its Gross National Product ( GNP).

Unlike some technical indicators, this ratio makes logical sense to me.

Individual company earnings – or the earnings of entire sectors such mining or retail –  can be very volatile. That limits the value of using price to earnings ratios to spot bubbles – even if you smooth them by using a cyclical P/E.

However in a developed economy, it seems intuitive that the economic output of a country and the earnings of its companies – and hence their valuation – should bear some sort of relationship.

That’s where this ratio comes in.

The stock market / GNP ratio means nothing in and of itself – there’s no rule that the ratio should be X or Y at any point in time.

However by comparing today’s ratio with previous readings over time, we can potentially spot episodes of over- or under-valuation.

I say potentially because the ratio is not perfect, as I’ll explain below.

But it was good enough for Warren Buffett in 2001, who wrote:

The ratio has certain limitations in telling you what you need to know.

Still, it is probably the best single measure of where valuations stand at any given moment.

Buffett was using the measure to explain how he saw the Dotcom bubble developing the late 1990s.

The question is can we use the stock market to GNP ratio to spot new bubbles in advance?

Note on GNP versus GDP: Buffett compares the stock market to GNP. Most analysts use Gross Domestic Product (GDP) instead. In theory this should matter a lot. GDP is defined according to location, being the goods and services produced by a country. GNP is defined by ownership, as I’ve explained above. In practice though the two numbers are very close for the US, and the US is the only country where this ratio seems to be regularly computed. So like others, I use GNP and GDP interchangeably below.

History of the stock market to GNP ratio

When you look back in the history books, most stock market peaks in the US have coincided with an elevated level for the stock market to GNP (or GDP) ratio.

And that makes sense. Excessive profitability for companies tends to revert to the mean, and productivity improves slowly.

Advanced economies as a whole grow at low single digit rates, too.

This all means that big run ups in stock prices over short-periods tend to have more to do with investor sentiment than fundamental changes to the long-term prospects of those companies.

In other words, we’re by turns greedy and fearful. Sometimes we’re like footballers’ WAGs in Harvey Nicks, and no price is too high. At other times we’re haggling for cut-price bargains at a boot sale.

By looking at the ratio of stock market to economic output, you can try to spot the ‘greedy’ times and tailor your strategy accordingly.

For example this article and graph from Smart Money used the ratio to suggest that the US stock market had outgrown the US economy: 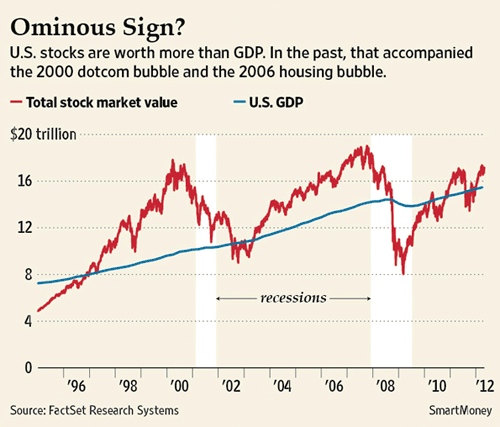 Spot the dotcom boom and bust!

U.S. earnings are near a record high as a share of the economy. Over the past 80 or so years that has tended to mean that earnings are about to shrink.

Sounds sensible, but with the benefit of hindsight we can see two glaring problems:

If you that graph prompted you to reduce your holdings of US equities and go to cash, you lost money.

Market timing is extraordinarily difficult, and this is just another reminder.

Problems and limitations with the ratio

Wary though I am of disagreeing with Warren Buffett, it seems to me this ratio is no more useful than most other ways of guesstimating whether shares are expensive or not.

It might give the determined active investor some clues, but it isn’t going to solve the mystery.

Let’s consider a few of the problems.

Little UK data for the stock market to GDP/GNP

It shouldn’t be hard to produce UK data, and no doubt various firms do on a private basis. But I can’t find public sources on the Web.

The ratio has only really been looked at in-depth for the US, which limits its usefulness for the rest of us.

I think it could be misleading to apply this ratio to other countries too superficially, anyway.

For example, one Seeking Alpha writer wondered in 2011 which stock market was the most expensive by this ratio, and produced the following graphic: 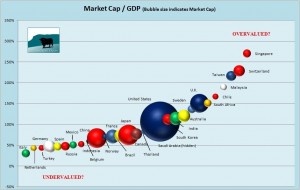 The author noted that:

There are several reasons determining the size of a country’s stock market capitalization including, for example, the equity-buying culture of the local population, company use of debt versus equity financing, the country’s regulatory and legal environment as well as how easy it is to list on the local exchange.

In general however, it is probably safe to assume that there should be a positive correlation between a country’s market capitalization and its GDP.

Indeed it turns out there is a very high, 0.96 correlation between the world’s largest economies GDPs and their stock market capitalisations.

I agree with the second paragraph, but I’d question the utility of the third.

The problem is the variations behind that average ratio are so wide. For instance, the author found that at the time of writing, the ratio for Italy was 0.3 and for Germany it was 0.43, whereas for the UK it was 1.5.

Did that mean that Italy or Germany was 4-5 times cheaper than the UK?

The UK stock market is home to many companies from around the world. We’re also one of the most capitalistic of the major economies. Our listed market is a bigger deal than the equivalent for Germany or Italy, which are home to far fewer foreign firms and where there are surely more companies in private or even State ownership.

You would need to look at a particular country’s ratio over the long-term to derive any useful insights into its market valuation versus economic output at any particular time.

And comparing one country’s ratio with another seems entirely spurious.

What about overseas sales?

This is an important factor, which most of the articles I’ve cited also mention.

Apple, Google, and many other big US companies earn much of their money overseas. This means that comparing their valuations with US economic output could be misleading. Why should they be limited by US growth?

Of course, global trade is nothing new. I don’t know off-hand how the proportion of earnings generated by US companies overseas has changed over the years.

I know it has changed, though, and it is another factor to consider.

The ratio is often elevated, and thus arguably useless

The biggie. Look at the graph from Smart Money again. The red line is mainly above the blue line, which means the US market has most often tended to look overvalued.

History may yet prove this to be the case, but over long multi-year periods it’s been a pretty poor signal to get out of stocks.

The ratio is even more stretched if you go back to the 1950s: 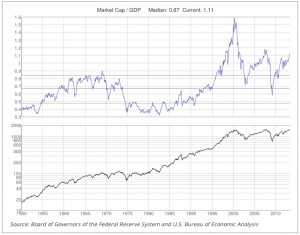 Click to enlarge this long-term market cap to GDP ratio

This is a really interesting graph, because it suggests the US market might have been very over-valued for a couple of decades.

I have previously explained why I think carefully looking at long-term returns suggests that ain’t necessarily so.

Which view is right? Who knows – history is unfolding before our eyes. My best guess is the answer lies somewhere in the middle.

Clearly the US market was a steal in the 1950s and 1960s (when Warren Buffett started getting rich, incidentally). This was when the ‘Cult of the Equity’ was born, and investors began to shift wholesale from bonds to equities.

However I think globalisation and various other factors have probably changed the ‘fair value’ level for the ratio since the 1950s.

In addition, with interest rates very low – and fears of inflation not abated – it is arguably rational for investors to pay more for the earnings of companies today.

You’ll have to make your own mind up. As always, I certainly wouldn’t use this ratio in isolation from other factors.

Remember, most methods of predicting the returns from equities have a truly dire track record. Be warned!

Previous post: How to invest in the value premium