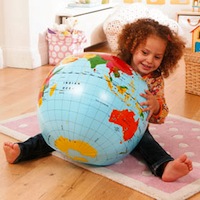 Always be alert to the different ways in which large numbers can be (mis)interpreted when trying to make sense of the world.

Never forget: You’re an upgraded ape with delusions of grandeur, designed to hunt gazelles and run away from lions. You’re prone to fear and greed, you love being in with the crowd, and you’re afraid of heights and of the dark.

And all this equally well applies when investing – because what else have we got to go on?

We need to quieten the chimp within us

to get unemotional about data, in order to invest through the cycles of boom and bust without getting giddy in the good times, or paranoid in the bad.

The view from the stock market’s summit

Let’s consider how a superficial read can mislead us by considering the long-term returns from the US stock market.

Below is a pretty typical graph, of the sort you see in the introduction to many investing books. It shows how the US stock market has risen from the 1930s until a year or two ago:

How do you feel when you look at this graph?

A pretty normal reaction might be: “Oh my goodness, we’re doomed!”

It looks as if the stock market only really got going in the Yuppie era of the mid-1980s. Until then, the City was asleep. How Warren Buffett made his billions seems a mystery, given the near flat line he had to trudge along for most of his career.

In short, we still appear to be in the midst of an enormous stock market bubble that is certain to burst! (Again!)

And indeed I have seen this graph used to make exactly that claim.

Now, this data is not wrong – the US stock market did indeed rise as indicated in the graph.

But if we consider its ascent in the light of various other factors, we may decide we look far less likely to be heading for a nasty fall.

Getting real about returns

The first thing to point out is that this graph shows the nominal price level. That means the data has not been adjusted for inflation.

Considering that inflation tends to run at 2-3% a year, this makes a big difference once compound interest has done its work over several decades.

The next graph is one of several I am going to use from Visualizing Economics.

Again it shows a huge spike in the past three decades for the equity market, compared to what has gone before – this time taking us back to 1880:

At first glance you might not see much different about this graph compared to my first graph.

However compare the two more carefully. This time you can clearly see several previous peaks, along with those double stalagmites of the recent highs (tested again, incidentally, since this graph was created in 2010).

By adjusting like this for inflation, we can more easily see the big run-up in stocks that occurred in the late 1960s. This graph also makes plain the 1920s bubble (which was already underway just as the first graph gets going – but even if it were fully shown, it would just look like a blip).

Displaying the market’s ascent in real terms like this helps us see that investors didn’t spend every day asleep at the office until the 1980s. There were plenty of roller-coaster rides on the way.

The next and arguably the most crucial adjustment we need to make to the data is to change the scale we use.

Currently, we’re looking at it in a linear scale. This is misleading. Why?

Well, simply by eyeballing the graph above, we can see the US market went up about 50% between 1900 and 1906. That’s quite a move in just six years.

However on the graph as a whole this surge barely registers, compared to those Peaks of Doom to the far right of the graph.

This is because by the time we get to our era, the market is up at levels some 10-20x higher in absolute terms compared to the turn of the century, even after adjusting for inflation.

Again, the data is not wrong, but visually it exaggerates the recent past and tricks us into thinking we’re looking at an enormous and unusual bubble.

When looked at in log terms, the stock market return over the last couple of decades – those big twin peaks of recent infamy – look positively ordinary. As indeed they should – due to the bear markets of 2000 and 2008 that wiped out most of the excesses of the late 1990s, stock market returns from 1990 to 2011 were actually below the long-run average!1

For the avoidance of doubt, I am not saying the market wasn’t grossly overvalued in the year 2000, or anything like that.

But I am saying it’s been grossly overvalued and undervalued before.

The inflation-adjusted log graph shows us very clearly how the market has endured all kinds of booms and busts, and also how overall it has marched pretty steadily higher, provided you stand far enough back (and squint a bit!)

Real versus nominal, side by side

If you compare that inflation-adjusted log graph with the very first graph that showed nominal growth in linear terms, I think you’ll agree we’re now seeing a much less scary – and more informative – picture of stock market growth over the long-term.

The next graph illustrates the same point, via two log views of the US market.

The blue line has not been adjusted for inflation, whereas the black line has:

I wish I could show the blue line in linear terms, to ram the point home.

Perhaps that’s a project for a rainy day…

Dividends do it again

I’m not quite done yet. These graphs still don’t show the complete picture.

I mean, some of you may feel as deflated as the graphs by now. Why invest in equities, I hear someone cry, if over 120 years you just get a crummy line that limps higher from left to right?

To which a couple of points:

Annual dividends are a huge part of the stock market’s total return, and the graphs we’ve seen so far assume you spent all your dividends partying with cads, flappers, hippies, punks, and ravers as the decades rolled by.

What if you sensibly reinvested your dividends for your long-term wealth?

Who wants to be a millionaire? As you can see by the green line, reinvesting dividends makes an enormous difference to your return. Pumped up by dividends, the log graph now looks perky again.

Remember that the visual impact of this return is flattered by compound interest being applied over more than a century. Somebody reading this might have 100 years to live, but such precocious seven-year olds aside, that’s not a realistic investing time frame for most of us.

But by now you know to look twice at any data before reaching a conclusion, right?

Why equities grow over time

One more thing. There are some out there who think the whole stock market is a Ponzi scheme, built on suckers selling paper shares to other suckers, and so forth.

As such, these folk think even the steady growth we see in the later graphs is too good to be true.

I haven’t got much time for these people. Frankly I’m glad they tend to live in the caves and the backwoods of North America. (I get the impression that most of them don’t have much truck with fancy consumer goods such as soap and hot water.)

Nevertheless, it’s important to remind any doubters that there’s a good reason why equities can be worth more over time, even after inflation. And that’s that economies – or at least the one’s we’re concerned about – have tended to grow their GDP over time, too.

As GDP grows, listed companies benefit by expanding their share of business. So there’s a direct (if imperfect) relationship.

And here’s how US GDP grew during the last century and a bit:

What’s that I hear you say? This is a linear scale, and you’d rather see it in log terms?

Absolutely right – well done young padawan. Double extra pudding for you for paying attention, plus your wish is my command:

Not so crazy now, is it?

The bottom line: Returns can be calculated and illustrated in many different ways, and whoever is doing so may well have an agenda. Meanwhile your first emotional reaction may well be your least reliable one.