Updated by The Accumulator on February 2, 2016

Were I able to go back in time to impart one piece of wisdom to my teenage self – one nugget that would have made all the difference to my financial future – I would somehow engineer the absence of my maths teacher for a single lesson.

Then, heavily disguised as fresh supply teacher meat, I would instruct the class in the power of compound interest.

It wouldn’t take long, needn’t tear a hole in the fabric of space-time, and it would have made a far deeper impression on me than another drone-a-thon about quadratic equations.

Because everyone likes the idea of money for nothing.

Alas in reality what little money I did lay my hands on at that time went on instant gratification. You know how it goes.

If only I had understood what a mighty money tree I could grow by saving even a pitiful amount early on and watering it with time and compound interest! 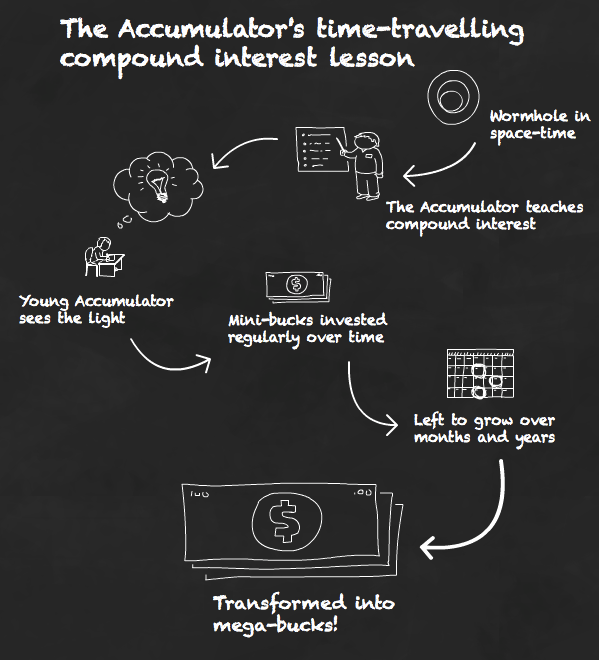 Compound interest is the astonishing multiplier effect1 of interest earned on interest, over time.

It works like this for a saver who sticks away £1 and earns interest of 10%:

In Year Two, you don’t add a bean to your savings, yet you still rack up more interest than the previous year (11p instead of 10p), because you also earned 10% interest on your interest.

Big wow. It doesn’t sound so life-changing – until you scale up the amounts and timescale involved.

Once that self-feeding, compound interest mechanism gathers momentum it creates a runaway money snowball that can transform your financial position.

But time is needed to generate that momentum. The sooner you start saving and investing, the more dramatically compound interest can work for you.

Captain Sensible then leaves his nest egg untouched to grow until he hits age 65. He earns an average annual return of 8%2 and when he looks at his account 30 years later, he has £314,870 to play with.

Captain Blithe, meanwhile, spends the lot between the ages of 25 to 35. Only when he hits 35 does he sober up and start tucking away £2,000 per year in his ISA. He keeps this up for the next 30 years until he reaches 65.

Yet Captain Sensible’s pile is worth over 28% more than the late-starting Captain Blithe’s – even though Sensible only invested a third of the amount.

Remember our ho-hum interest table above? Let’s dial up the years setting to 30 to see how she performs:

After 30 years at 10%, you’re earning almost twice your entire initial investment as annual interest. That’s the power of compound interest.

Of course, the only place you can hope to get a 10% return these days is the stock market, and stocks go down as well as up. Real-life returns are more volatile, but the principle is rock solid.

When you’re young, time is on your side. Make the most of the once-in-a-lifetime opportunity by sticking some money away (anything is better than nothing) and let compound interest get to work securing your future.

You’ll be laughing later. (At me, as I snivel and regret my youthful folly).

P.S. – Even if you’re not so young, now is still the best time to start.