How compound interest can save our pensions

A common reaction among my peers to the slow-motion car-crash that is the pensions crisis is: “We’re gonna have to work ’til we’re dead anyway.”

It’s a fatalistic, short-sighted, shoulder-shrugging attitude that translates as: “I’m not saving enough for my pension and I’m going to put off doing anything about it by pretending I can’t do anything about it.”

But of course there’s plenty we can do about it, and it only takes a quick play with a compound interest calculator to see that delay does nothing but make the problem worse.

Compound interest and time are the nitro and glycerin of personal finance. Except it’s a friendly explosion.

It’s well known that compound interest can turbo-boost your fortune. Initially the effect of earning interest on interest is small – almost invisible – but over time it accelerates dramatically. 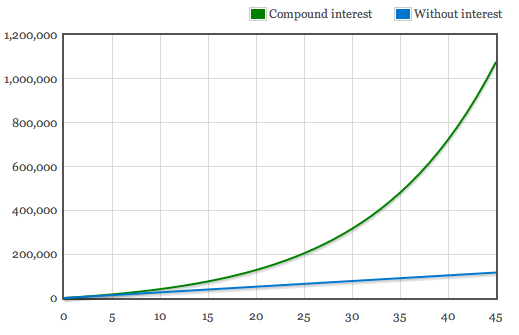 To maximize the miracle grow power of compound interest, it’s important to understand the major components that influence the effect:

Time is the critical factor

Compound interest can do much of the heavy lifting towards your financial goals, if given enough time.

The Monevator millionaire calculator illustrates the point by showing how much you need to save every year to earn a million by age 65.1

The differences are horrendous. Delay for 10 years and you must save at over twice the rate. Wait 20 years and you’re looking at saving more than five times the amount of a 20-year old.

Make your child a millionaire: If you’re expecting kids any time soon, you could make your child a millionaire by age 65 by unleashing the power of compound interest. Start investing for your kids from day one and if you earn an average annual interest rate of 8%, then tucking away just £1.48 a day will do the trick. Not a bad present in these days of pension insecurity. Just make sure they can’t get their mitts on the moolah a day earlier!

Seemingly small changes in the interest rate can have a profound impact on your final result. See how much less our protagonists need to save if we up the average annual interest rate to 10%.

Our 20-year old would-be-millionaire can save nearly 50% less per year by earning 2% more than in our previous example.

Stretching for yield works less well (and is considerably more dangerous) for the 40-year old, who can only reduce his annual saving amounts by around 25%, given the shorter time he has left.

In contrast, things look considerably less sunny if we drop the average annual interest rate to 6%.

A 20-something investor earning 6% must save 81% more than a 20-something who earns 8%. With less interest to compound over the decades our young investor must increase their annual commitment, if they want to achieve the same financial goal in the same amount of time on the lower interest rate.

The message is that it can pay to invest aggressively if you’re young and you can handle the risk. Sitting in low-yielding assets like cash or bonds is likely to cost you over the long run.

The historical return rate of the UK stock market is around 5% before inflation (add on about another 3% for that) while cash and gilts have brought in about 1%.

If you’re young then you have the time to hopefully take advantage of the peaks and ride out the troughs that come with an aggressive asset allocation tilted towards equities.

The table above also shows why you must guard against other assailants trying to mug your returns, such as the taxman and the expensive fund manager.

Make sure your money is tax-shielded in ISAs and pensions, and that you use low-cost index trackers so that the power of compounding has as much interest, dividends and capital gain to work with as possible.

The best time to plant a tree is 20 years ago. The second best time is now.

Forget about yesterday, and do something about tomorrow.