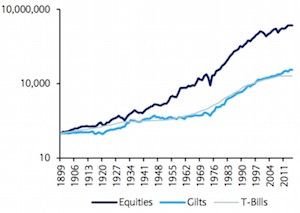 As you can see, equities (shares) have done much better than gilts (UK government bonds) over the long-term.

A couple of things to note:

Key to the strong growth we see in this chart is the reinvestment of income.

If you don’t reinvest income – perhaps because you’re quite reasonably spending it to support a modestly lavish income in your old age – then those stupendous returns come down significantly.

Below is the same chart – again in nominal terms – without income reinvestment.

The graph shows that the value of equities just roughly keeps pace with inflation in capital terms over most of this particular time sequence, once income reinvestment is taken out of the picture.

It’s a striking difference – check out the scale, as well as the grey price line – though I’d caution that it shouldn’t be taken to mean that dividends are always of supreme importance compared to capital gains, or some of the other excessively strong interpretations you’ll hear of such data.

Sure, if you don’t reinvest income then your returns will be much reduced.

But shares that pay no dividend might be expected to grow more rapidly in price terms to compensate.

Also, if you spend a significant amount of your return – whether that’s by spending your income or by selling down capital and spending the proceeds – then of course your long-term return will be reduced.

Dividends are important – but they’re not magic!

It’s also worth noting how poor the return from gilts has been over the very long-term, particularly in the context of how unusually strong they’ve been over the past couple of decades.

You have had to reinvest your income with gilts just to keep up with inflation.

These are fascinating graphs, particularly if you’re a teenager who plans to live to a hundred and you don’t care about inflation for some reason.

For the rest of us, it’s more useful to look at historical asset class returns in real terms (i.e. inflation-adjusted) as is shown in the following table:

Source: Barclays Capital Equity Gilt Study 2016 (where no data is available, there is a gap).

The table shows real returns – the annual rate at which the asset class grows (or shrinks) over any particular period after inflation.

For instance, if inflation is 3%, then your money needs to grow by at least 3% nominal to keep up with this inflation (after-tax).

Historical asset class returns: the long and short of it

It can be misleading to look at just the last couple of years of asset class returns when you’re deciding how to invest over the long-term.

Only cash and very short-term government bonds provide a sure return over the near-term.

Returns from other asset classes are volatile, so their brief history gives you no useful information

Shares may do very well one year and bonds do poorly. The next year the returns may be different, or it may take years before their relative performance changes.

Nobody can know for sure.

But over the long term – such as three or four decades of saving into a pension – the compounding power of the higher return from shares compared to bonds and cash usually wins through.

By owning a simple portfolio of different assets you benefit from diversification.

When one asset class has a bad year another one will likely have a good year. This dampens the ups and downs of your portfolio’s value.

Rebalancing can also help smooth out the zigging and zagging of the different asset classes.

The price you pay for this reduced volatility is a potentially lower overall long-term return, because your holdings of lower risk assets like bonds and cash will typically deliver far less in the way of gains than shares.

For that reason, if you’re investing for the long-term into a pension, say, it may make more sense when you’re young to regularly put new money into shares alone, and to ride out the volatility to maximise your returns.

But whatever you do, never take more risk than you’re comfortable with. Always think about your personal risk tolerance.

And remember that a stock market crash can hit you hard if it strikes as you approach retirement.

A final and riskiest option in deciding how to allocate your money is to take a view on what assets look cheap and expensive at any point in time.

You can then tilt your portfolio to try to capture a reversion to the mean – that is, towards the average historical returns we saw above.

I do this to some extent (I don’t currently hold any gilts, for instance) but I wouldn’t recommend it unless you’re sure you can avoid following the crowd, and you understand that poor calls could cost you money.

Wealth warning: There’s no proven method for forecasting long-term stock market returns. Studies have shown even the best predictive metric (the longer-term PE ratio) can only explain about 40% of future returns.

Anyone can see that different asset classes have good and bad years – it’s obvious from tables of discrete annual returns.

But timing when reversion to the mean will happen is very different from just predicting it will happen someday.

So where do we stand today versus the long-term returns?

At the time of writing, the historical real return from UK government bonds (i.e. gilts) over the past couple of decades still looks out of whack with the long-term average.

Indeed the real return over the past 20 years of 4.3% from gilts is higher than the 3.7% from UK shares.

This doesn’t make much sense. Investors would normally expect a higher return for holding volatile assets such as shares instead of bonds.

Sure enough, that’s what you see in the table above if you look back over:

It seems likely that the financial crisis and the subsequent monetary easing and low interest rates from Central Banks have pushed the 35-year old bull market in bonds to a (final?) flourish of strong returns.

Gilts returned 16.4% in real terms back in 2014 alone – a year in which most market experts (and virtually all Monevator readers who left comments on this site) considered gilts very expensive, and not worth owning.

I didn’t own any either, so I’m not being smug. Trying to time these asset classes is much harder than it looks.

Remember: Missing good years like 2014 for gilts due to a misfiring tactical allocation strategy means you will need to do even better in the future to make up for the foregone returns.

These things do tend to sort themselves out over time – even if such a reversion feels unthinkable at any given moment.

Just look at the following table from the 2010 edition of the Barclays report:

From this table, it’s again pretty clear that different asset classes can deviate from their long-run returns for substantial periods of time.

Indeed equities were showing a very unusual negative real return over the decade to 2009.

As I wrote in the 2010 version of this article:

UK shares have struggled to advance over the past 10 years, as the markets have been felled by the dotcom crash and the financial crisis.

Over the long term such periods even themselves out, which is one reason why a strong decade for shares may follow the terrible 2000-2010 period.

But there are no guarantees.

We all know what happened next. The FTSE-All Share rallied nicely for several years, and you did even better with reinvested dividends.

Yet in 2009 in the midst of the greatest buying opportunity for a generation – and with the table above showing how badly shares had done for a decade – buying them was not easy whatever anyone says now.

Many people had sworn off shares for good by 2009.

But you should never say never again if you want to be a successful investor.

Remember if you’re using an investment return or compound interest calculator then it’s legitimate to use long-term historical returns as a proxy for the interest rate function in the calc.

Note: Comments below may refer to a previous version of this article, so please check their date.

Next post: Weekend reading: Egging on another stock market wobble

Previous post: What you need to know about risk tolerance