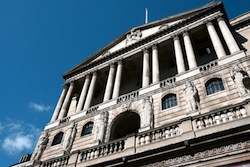 Like most others, the UK government borrows money by issuing bonds. In the UK, these government bonds are called gilts.

The name ‘gilts’ hints at their antiquity. Back in the day, gilts were pretty certificates with gold-leaf trimming. These certificates are the origin of the phrase gilt-edged security.

Today gilts are bought and sold electronically. Given that the cash-strapped British Government has been raising more than £200 billion a year by auctioning off new supplies of gilts, that development is perhaps to the relief of postmen across The City.

Gilts are the safest form of UK investment

An investment in gilts has long been considered about as safe as investing gets. The British Government has never defaulted on its debts in its several hundred years of raising money. Only US Treasuries and the bonds of a few other countries are considered as secure.

This perceived security is reflected in the UK’s AAA-rating for its debt. The AAA-rating has so far survived even the sharp deterioration of the UK’s financial strength in the wake of the credit crisis and recession of 2008/09, as well as quantitative easing.

The UK Treasury (via the Debt Management Office, or DMO) has skilfully taken advantage of our excellent reputation by issuing gilts with a very long life. Gilts have been issued with as long as 50 years to run until they’re redeemed.

Investors will only buy such long-dated securities if they’re confident the government will still be honouring its debts in 50 years time!

The UK has its own currency, of course, which in principle makes paying its debts a formality – unlike you, me, or a company, the government can simply print money to meet its debt payments.

Investors in gilts aren’t idiots, though, and they’re well aware of this. The trust placed in gilts isn’t just that the UK government will honour its debts in full, but also that it will manage the public finances in such a way that high inflation won’t erode the value of their investment.

The average maturity of UK gilts is around 14 years. This is the main reason why we have so far avoided the sort of sovereign debt panics that struck Greece and Ireland. The markets can take a sanguine view, knowing we’ve years to come up with the money to pay out debts.

If you buy a gilt when it’s issued for exactly its nominal value and hold it to its redemption date, you know exactly how much money you’ll get over the years.

Gilts are generally sold by the government for a little more or less than their nominal value, however.

When the redemption date is reached, the government pays you back the nominal value of the gilt. This makes it almost impossible to lose money with gilts in cash terms, provided you hold until redemption and the government doesn’t default, though inflation can easily erode your real returns.

Note that this doesn’t mean you’ll necessarily get back what you paid for your gilts. You might pay £105 in the open market, and receive just £100 back when the gilt is redeemed. However this capital loss will have been taken into account by the market and reflected in the income you’ve received for holding the gilt. This total return is the key.

Undated gilts payout their coupon forever. They can be considered a bet on very long-term interest and inflation rates.

Gilts are traded, which introduces risk

Once issued by The Treasury, gilts can be bought and sold on the secondary market until they mature, just like shares and other securities.

An easy way to think of how their price fluctuates is to imagine what you’d pay to own the aforementioned War Loan 3 1/2 pc:

The investor’s calculation is complicated by the fact that an undated gilt is never redeemed. This means his view of interest rates (and inflation, and UK solvency) must extend far into the future.

Dated gilts are less risky investments. You know you’re going to get the nominal value back (not the price you paid, remember!) when they are redeemed, regardless of how their price fluctuates in-between. This makes it possible to calculate a yield to redemption, which takes into account both the annual coupon you’ll be paid for owning the gilt, and the capital gain or loss you’ll make when the gilt is redeemed.

This assumes you hold the gilt until it’s redeemed, of course. If you sell it before then, you might make a trading gain or loss.

You don’t have to calculate redemption yields and so on for yourself. Prices and yields are listed in newspapers like the Financial Times, and on websites like Fixed Income Investor.

A few other useful things to know about gilts

I have written extensively about bond pricing and yields on Monevator in the context of corporate bonds. Gilts are priced and traded in exactly the same way, only the risk of default is far lower.

Here’s some articles to help you understand more about bonds:

For yet more information on gilts, check out the DMO’s official lowdown on gilts.