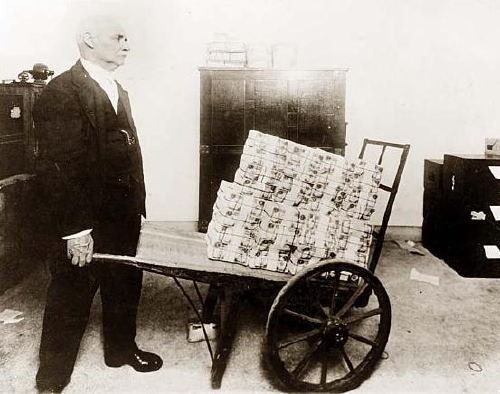 A quantitative easing professional going about his business

A few months ago, nobody but a few U.S. Federal Reserve groupies had ever heard of quantitative easing. Yet today we’re told it’s the only thing that can save the financial system from meltdown.

Quantitative easing sounds like a laxative, which is appropriate since:

Let me explain why quantitative easing is a worry in less flippant terms.

Firstly, nobody knows if quantitative easy will work

I’ve probably followed the financial crisis as closely as anyone whose job doesn’t depend on it.

And yet I’m not ashamed to tell you that I don’t know whether quantitative easing will work.

Sure, I have hunches, in the same way as I might bet you a beer on the football at the weekend.

But the truth is quantitative easing is hard to understand, and even harder to make predictions about.

Unfortunately, the volume of comment on the subject is inversely proportional to the level of understanding out there.

Every newspaper, financial TV program and pundit is parroting the last person who spoke about it, but very few are admitting they haven’t really got a clue.

So let me say very clearly then that I don’t know whether quantitative easing will work, or even exactly how it will work.

But equally, I think I’m in very good company.

I could read Wikipedia, then write a detailed post like other commentators explaining that the banks aren’t lending to each other, and so that by purchasing assets as a buyer of last resort the Central Banks hope to re-stimulate the market, and that by effectively printing money to do it (albeit at the stroke of a key on a computer screen) they are gambling that fresh liquidity will get the system going again without sparking inflation.

But you know what? I don’t truly believe that’s what is really going on.

What I think is really going on is so primitive that I risk alienating my regular subscribers who value my thoughts on financial matters.

So, in all seriousness, I say this is what quantitative easing amounts to:

You know when your old TV doesn’t work, or your lawnmower doesn’t start, or your office photocopier won’t reboot, and somebody says “Bang it!” And you do bang it? That in a nutshell is quantitative easing – bankers banging on the machinery of the system to get it going again.

It’s a fudge and a fumble, required because interest rates can’t be cut any further and asset prices are still falling. (Though LIBOR, the interbank lending rate we used to hear so much about, is normalizing again, so there is good news, too).

Perhaps you don’t like my honest view on quantitative easing.

Fine, but who else are you going to listen to?

Since 2005, I occasionally tried to explain to financial journalists that house prices were surely over-valued. They acted like I was from Mars. I wouldn’t trust them to understand quantitative easing.

What, the same markets that valued dotcoms at hundreds of times earnings back in 2000 and marked them down to nothing 12 months later? The markets that thought sub-prime mortgages were nearly as safe as government bonds? Listen, I’m a stock market devotee and a capitalist, but I’m not afraid to say that in the short-term the market is a nutcase. (I say it out of love!)

Here in the UK, Gordon Brown told us he’d abolished the economic cycle – “No more boom and bust!” – when all he’d done was take out a big mortgage and spent it on public services. I wouldn’t trust a politician to master a unicycle, let alone the economic cycle.

I think in the U.S. Obama’s heart is in the right place, but I doubt any politicians really understand quantitative easing. They just need to be seen to be Doing Something.

Probably the least culpable actors in this drama, at least in the UK where we don’t have Alan Greenspan’s legacy of ultra-low rates to set against them. In the U.S. Federal Reserve chairman Ben Bernanke studied exactly this sort of crisis for many years as an academic – in other words, he pretended to know about quantitative easing long before it was fashionable to do so. On the other hand, these are the Central Banks that were raising rates to fight inflation just a year ago, with graphs that didn’t even show the possibility of a negative rate.

In my view, we’re best off just accepting nobody really knows what will happen from these measures. It’s uncomfortable to say so, but at least it’s honest.

Because having said that nobody knows what the outcome of quantitative easing will be, I’m going to make a prediction.

My untrustworthy prediction: If quantitative easing works and the banks start lending money freely again, then inflation will take off.

How much inflation? That’s the trillion dollar question, and one I’m utterly unqualified to answer (as is everyone else, in case I seem too modest).

Ask yourself though, is it likely that in effectively banging the gears of credit until they get going again, central bankers will see inflation serenely settle at a rate of 2%?

What’s much more likely is that they’ll keep hitting the machine until it suddenly springs into life and starts spewing notes everywhere. In other words, inflation.

I well remember the pictures from my schooldays of desperate people in Germany wheeling about barrows of useless paper. Printing money has got so out of hand at some points that it’s been cheaper to burn cash than to spend it on fuel!

The difference, as I see it, is that typically hyper-inflationary periods are associated with governments using the printing presses to try to bail themselves out of debt. While the UK and the U.S. are running up huge budget deficits, I don’t personally think we’re at that stage yet.

But such is the dangerous tinderbox that the Central Banks now feel forced to play with.

Uncomfortable truth 3: We may need inflation

While it’s incredibly unfair to prudent savers and investors, it’s possible that the only way to steer through these waters is for nations to voluntarily inflate away the debts that are crippling the system.

I’ll return to this subject in a future post with a thought experiment, so please do subscribe to keep in touch.

For now, let’s just agree that what the Central Banks are doing is classically inflationary – setting ultra-low interest rates and increasing the money supply.

Set against those inflationary actions is a global recession that may yet turn into a depression that is pulling down the value of houses, businesses, and commodities and financial securities of all sorts. These are all deflationary forces.

The banks’ aim is to create enough inflation to counter those negatives, without letting the genie out of the bottle.

To stop companies and people going to the wall in numbers last seen during the Great Depression, Central Banks know they must do this to arrest the decline in asset prices, particularly house prices.

House prices probably have some way to fall – and certainly should fall relative to rents and income – but the underlying financial securities that back the mortgages on those homes have been discounted even more steeply.

So the authorities need to get the market to believe that there is light at the end of the tunnel when it comes to falling asset prices.

The hope is that will kick start a virtuous circle as asset prices are revised upwards, and banks and others start to spend cash on buying more such assets (and borrowing from each other to do so) rather than hoarding it in cash or government bonds.

(Regular readers may recall my small investment in Prodesse, the mortgage-backed securities investment trust, is a bet on such a time coming to pass.)

Nearly 30 years ago, Federal Reserve chairman Paul Volker had to raise U.S. interest rates to 20% to combat inflation of 13.5%, following the stagflation of the 1970s.

If (or when) the money printing results in an overshoot of the inflation target, we could easily see such ghastly interest rates once again.

How to invest in such an environment?

Personally I wouldn’t want to be too invested in government bonds, which are already unwinding since yields reached the extreme lows I wrote about in December. But some allocation may be sensible if you fear deflation or a depression.

One middle ground if you’re nervous both ways might be utilities.

If we get inflation then utilities should be able to raise their prices, while if interest rates and inflation stays low, their income streams have bond-like qualities. The debt utilities carry is a worry in the middle of a credit crunch, but possibly it will become less of a danger if Central Banks do start lending money directly to companies via quantitative easing. If I remember correctly utilities did very well in Japan in its ‘lost decade’ (that is in danger of becoming a lost 20 years).

The best thing you can do is stick to your long-term plan – because nobody really knows what will happen.

Try to diversify, make sure you have some emergency funds in cash, and keep trickling money into your investments of choice.

Oh, and cross your fingers.