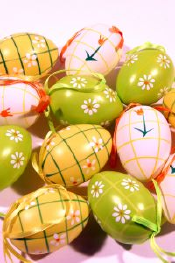 A core principle of most sensible investing strategies is to avoid having all your eggs in one basket:

Enough of the eggs already. (Not least because it’s making me hungry).

In practical terms, what it means is splitting your wealth between several asset classes, such as shares, bonds, and property. (See the Ivy League portfolio for an example).

It also means not putting all your money in just a couple of stocks or bonds or one rental flat above a Chinese restaurant, but rather diversifying for instance your equity allocation by buying a dozen or so stocks, or by using an index tracker.

All very sensible, and advisable. But in recent times largely useless.

Read on to discover what it means for your money.

Take a look at the following data from Morgan Stanley and Bloomberg (that I found cited in the FT‘s print edition).

It shows the correlation over five-year periods between the US S&P 500 index and various other assets.

Correlation is a statistical measure of how closely the rise or fall in one asset follows that of another asset.

(Note: This data is for the US, but the story is pretty much the same in the UK).

Five-year % correlation between S&P and other fun assets

Cool, lots of numbers — what do they mean?

Column one shows lots of assets were not very positively correlated back in 1991-1995. You can see this from the low or negative numbers.

As you go from 1995 to September 2009, however, you see more of the numbers become positive, and most are bigger, too. This shows more assets classes becoming more correlated with S&P.

What does this mean for our investments?

Firstly, it means you weren’t alone if you felt like nearly everything you owned went down in the 2008 crash.

Sadly, it also means you’re not a genius for picking assets that rose in 2009!

With the exception of government bonds (see below) pretty much everything went down and up together.

Your portfolio isn’t safe from a slump

You should have known this already. Just as no individual investment is 100% safe, so no asset allocation strategy can save you from a brutal correction. In a downturn, most assets fall in value.

You may be overpaying for diversification

Anyone putting money into hedge funds in recent years has paid handsome fees to the managers in the good times, yet seen them crash with the markets later. Hedge funds simply borrowed and bet big, and charged for it. You may have been better off with cheap ETFs.

Look at long-term treasuries. In the early 1990s they were moving in the same way as shares, but more recently they’ve behaved completely differently. (The previous close correlation was probably due to falling interest rates that boosted both stocks and bonds).

The 99% correlation of global equities and the S&P is surely a consequence of how globalisation has brought the world’s economies together, and also how capital now scours the world for bargains. It’s still possible to find divergent markets (e.g. Japan) but currency risk is probably more critical.

Don’t give up on diversification

I think this data is very interesting, but I don’t think it’s a reason to abandon diversification and asset allocation.

For starters, some diversification is better than nothing. The table shows some assets are still less correlated than others.

Also, I think it’s possible that this whole phenomena is yet another consequence of the credit boom and subsequent slump. As cheap money searched for yield, it bid up all assets, and when it went they all fell in price.

While quantitative easing may now be boosting everything again, that won’t last forever.

Finally, be careful of the near-term. Reader Lemondy pulled me up on knocking UK government bonds in the comments on a recent post.

He or she is right that gilts are a contrary bet right now. Further, they have done very well throughout the crunch.

But looking back at the early 1990s in the table above, government bonds weren’t always sure-fire portfolio diversifier — long-term treasuries were 69% correlated with the S&P back then.

It’s also possible that government bonds will assert their lack of correlation by falling in price even as other assets rise, perhaps due to inflation. That would be cold comfort to those who bought them at today’s high prices.

Remember, a lack of correlation implies that when something does well, something else potentially does less well.

For most people that’s a price worth paying for less volatility. But like me you may prefer to try to buy asset classes when they’re cheap — at a cost of more sleepless nights!