At what yield are government bonds a buy?

I have written before how government bonds still look expensive to me, relative to the risks of inflation and the potential returns from equities.

The yield to redemption on UK ten-year gilts is 3.66%. That might have done in Jane Austen’s day, but it is pitifully small compared to earlier this decade.

The obvious question is at what yield I’d buy government bonds? At what point does a low but certain return become attractive?

To cut to the chase, my gut feeling is I’d currently be looking for a yield of 5% or more on 10-year gilts before I started buying.

That’s about a percentage point or so above the dividend yield now available on the FTSE 100. The so-called gilt-equity dividend ratio can get much more extreme though, so that doesn’t worry me – a bond yield double or more that of the dividend yield can occur in bull markets for shares.

Warning: I do not know where inflation will be in two years. Nobody does. Legendary investor Peter Lynch said if you spent 13 minutes thinking about this stuff, you’ve wasted 10 minutes. I’m just looking for a yield that doesn’t feel like shooting myself in the foot.

On inflation, there are – somewhat incredibly – two conflicting views vying for media attention:

I suspect both extremes sell newspapers in a world still nervous after the economic meltdown of 2008, and that’s why they get so much coverage. The reality will probably be a canceling out and a return to normality.

True, with US unemployment over 10% and the UK apparently still in recession, it’s easy to make a case for deflation.

Nevertheless, if I had to pick a surprise, I’d vote inflation:

The Bank of England think similarly on inflation, albeit it with a lot of uncertainty.

First, here’s its latest projection, released this week, for GDP (the darker the colour, the more likely the outcome):

Note the sharp bounceback the Bank predicts after the steep decline

You can see this GDP projection followed into its new inflation fan chart. (Note that the base line is the 2% inflation target, not at 0%):

Deflation very unlikely, but the wide fan shows how uncertain the outlook for inflation is

The Bank clearly sees very little chance of deflation (the weak red bar under the 0% level). Admittedly its forecasts have been dire for 18 months, but to be fair these have been chronically unusual times.

Confidently predicting inflation and interest rates is impossible, but to me it seems the risks at least are much more towards inflation than deflation.

Getting a real return when the real world returns

If inflation does reappear, it will eat into the returns of fixed interest and make today’s 3.66% yield look paltry.

The UK’s official inflation target is 2%, with a +/- 1% grace band either side before the Bank of England governor has to write and ‘fess up to the Chancellor.

At my proposed buying level of a 5% yield for gilts, I’d have a 2% buffer zone above the top of the Bank’s band, which would hopefully protect me from a period of above-target inflation.

I’d also consider buying a small amount of US Treasuries, for further diversification albeit at the cost of currency risk.

The U.S. authorities set no inflation target, and yields on US treasuries are generally lower in than UK gilts, due to our generally higher interest rates, the dollar’s status as the world’s reserve currency, and the huge amount of Asian currency hoarding.

Depending on the dollar/pound exchange rate at the time, I’d consider buying 10-year treasuries at a yield above 4.5% (For the record, it’s 3.35% today).

Both these target yields are far below the peak yields of the past couple of decades, and even the highs of the past five to ten years.

This chart shows the 10-year gilt yield over the past decade: 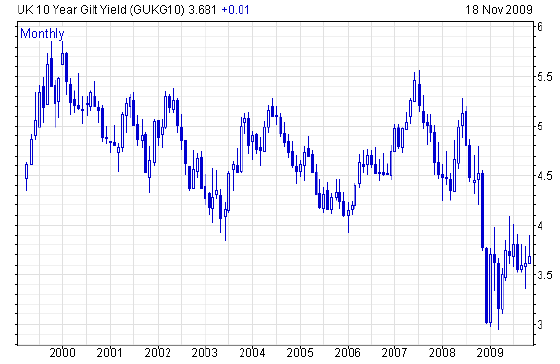 Anything above 5% has been a buying opportunity all decade

For what would be a small insurance policy against another crash and a diversifier against stock market volatility, I don’t think it’d pay to be too greedy.

How much would I allocate to government bonds? Well, I think we might be into a new bull market for shares, and I don’t think it’s impossible we’ll see average annual double digit stock market returns over the next decade. (No guarantees!)

For that reason – and the fact I don’t need my money right now, so can take a risk – I’d stay mainly in equities.

With government bonds, I agree with Dr Marc ‘Doom’ Faber, who said in a recent print edition of The Financial Times:

“It puzzles me that after a 28-year bull market in long-term US Treasuries, investors are pouring money into bond funds.”

So I wouldn’t go crazy. Ceteris paribus, I’d look towards a holding of around 10 to 20% in government bonds across a range of issues as a decent short term target.

The exact allocation would depend on the valuation of the stock market, with the potential to rebalance or even allocate a higher bond target if the stock market looked frothy – Benjamin Graham style.

The fixed return from the bonds would give some stability to the portfolio, and their special ‘essentially risk-free’ status would provide some insurance against a market crash.

With 60% to 70% of my portfolio still allocated to equities though (the rest being cash, VCTs, and commercial property) I’d still be very aggressively positioned to take advantage of rising share prices (or to suffer any falls!)

Remember, I’m in my 30s. If I was in my 60s, I’d hold more bonds. For other examples of asset allocation, check out these nine easy ETF portfolios.

Note: I’m not an expert, just a keen money blogger, and the musings above are only for your interest – not personal investing advice!