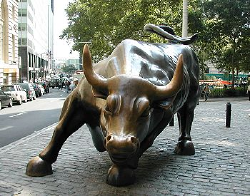 A couple of months ago I wrote a post entitled ‘Who isn’t buying this market right now?’

But as I wrote:

If you’re not trickling money into the markets at these levels then I think you might as well forget stock market investing altogether.

Since then the FTSE 100 has gone up over 20%, with some markets and shares doing much better. We could well be in a new bull market.

My March post wasn’t a claim I could time the market bottom, and this isn’t a boast that I did so. Besides, share prices could easily go back down from here.

My point was that you had to stand aside from the extreme negative press and plunge in if you were a long-term investor. You had to look at the depressed valuations, and remember that the best time to buy is when everyone else is in despair.

Today I read an article from Alan Steel, a fund manager, that backed up this view with a compelling list of historical parallels.

The whole article is convincing. Here are the key reasons why he thinks the March low means equity investors could see great returns for years:

A US asset allocation survey in early March showed that experienced investors held 46pc in cash – a record. The last two occasions when deposits were almost as high – 38pc in 1991 and 39pc in 2002 – were the previous two best occasions to have bought equities since November 1987.

Over the past 40 years, the sole occasion when extreme pessimism was as high as it was in early March 2009, was December 1974 […]. Over the following 12 months the UK stock market rose 149pc, including reinvested income.

Four major financial crises [coincided] with maximum extreme pessimism among experts and investors. The first three were in 1807, 1857 and 1932. The fourth? March 2009. Each crisis proved a buying opportunity for long-term equity investors.

US analysts Hays Advisory published a chart showing US stock market rolling 10-year average total returns from 1810 to the end of last year. Findings show four previous occasions when the rolling 10-year returns were close to, or below zero, as they are today. On each occasion, the following decade saw total returns from stock market investments close to 20pc per annum.

Can you afford to miss a decade of near-20% returns, which would be enough to multiply your portfolio six times over?

Remember that in bear markets, shares can easily fall back again, there are no guarantees and I’m not a financial advisor.

But personally, while I certainly don’t expect to see such amazing returns, it won’t be through want of trying!

Next post: How to create an Ivy League endowment fund using UK ETFs

Previous post: We should pay MPs more (but not this lot)