You know how Batman is a superhero without any superpowers? How he’s just a smart dude with loads of money?

Well he probably earned a chunk of that money through pound-cost averaging – the superpower for smart dudes.

Okay, work with me here…

You may not be feeling like much of a hero right now. The stock market has been smashed, and the global pandemic is unfolding like the first act of a horror movie.

There’s some whispered talk about this being a buying opportunity.

But it’s hard to buy when you’re frozen with fear.

However there’s a simple technique that turns you into a buying badass without lifting a finger.

If you’re already investing then you’re probably doing it already. You just gotta keep doing it during the meltdown.

Yes, it’s pound-cost averaging and it will work just so long these aren’t the End Times*.

Picture the scene. The markets are convulsed with panic. Equities go down 20% in a flash. They keep sinking like a submarine with a hole in its hull. They hit bottom 50% down from the peak. That’s up there with some of the worst bear markets in history.

Here’s the story told through the medium of pound-cost averaging:

Anything you had in before the crash is back to evens.

If you stopped investing dead at £10 per share then no profit for you. You’ll only break even when the market returns to £10 per share.

If you sold during the market swan-dive then you’re likely still under water.

But if you pound-cost average through the crisis then your portfolio breaks even sooner. Your new money registers a profit just as soon as share prices rise above your average buying price  – £7.69 a share in the example above.

If you don’t believe the end of the world is nigh and your emergency fund is in order, then keep calm and carry on investing.

Just keep drip-feeding the cash in by monthly direct debit. Buy your usual investments. Wait for the market to recover. Do not sell. 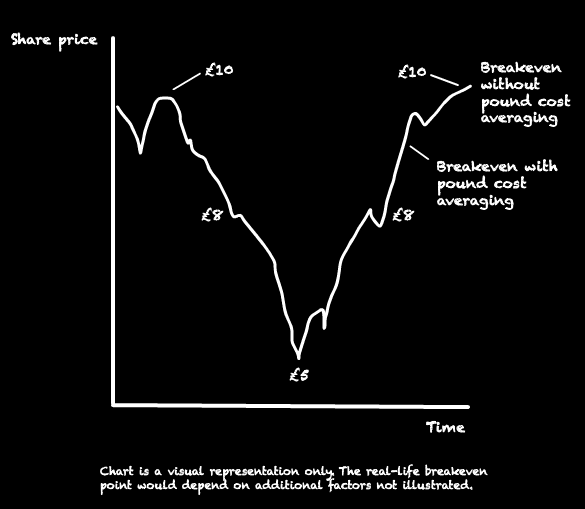 How long might it take for the market to get back to where it was?

Both studies assume you don’t move a financial muscle – that you’re paralysed like a poor church mouse in the face of the crisis cobra.

But recovery needn’t take quite so long if you pound-cost average through the crisis. It’s the auto-pilot program that makes you look like a daredevil.

* Pound-cost averaging doesn’t work if the market never recovers. If this is the end of capitalism as we know it then all bets are off. I don’t believe that it is. Do you?

Previous post: Monevator is an investment site, whatever the weather