Monevator is an investment site, whatever the weather 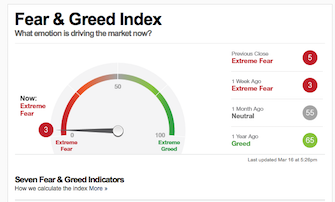 This is a testing time for everyone. As we begin to isolate ourselves and the economy is put into a coma to try to save the patient, it may seem like an existential threat.

So I understand why at Monevator we’ve received such a diverse range of feedback on our articles over the past few weeks.

As recently as mid-February, some readers ostentatiously shrugged and said “what crisis?” when I wrote about the virus threat to their portfolios.

But soon enough, as the scale of the challenge was realized, others complained it was not the time to talk about money.

I was several times accused of not caring about people – only about my portfolio.

This despite clearly stating in my articles that I understood that anyone dying was a tragedy for all concerned.

It’s hard to write that statement in less than a few  hundred words without sounding ridiculously glib. That’s because it really goes without saying.

My own mother is well over 70, and we got her isolating early. Time will tell.

Other readers have said they have a vulnerable daughter, or a son risking daily exposure as a doctor, or that they themselves have some kind of extra-susceptibility to the disease.

They have often coupled this with questions or opinions asking why – at a time like this – we are writing about the likely economic hit from the virus or the lockdown, or why we’re discussing whether to sell your shares or to buy more.

Don’t we understand people are going to die?

As I said, I understand it’s a tough time. You can’t argue against people’s feelings, and I don’t blame anyone for being fearful or single-minded.

But let me be clear.

Monevator is an investing blog. We are here to help people manage and grow their personal wealth. We’ll do that through booms and busts, bull markets and bear markets.

On the contrary, for exactly those reasons and others we will continue to talk about money, investing, and the economy.

Bluntly: however many people die.

Because that is what this site does. Doing what we do will be our tiny contribution to the bigger picture of keeping the world turning and getting through this horror show.

What else do people expect? For the Monevator home page to redirect to the World Health Organization? Should that also apply to the BBC’s weather pages?

Is it frivolous that people are watching movies in self-quarantine when they could be reading about the daily misery unfolding in Italy and potentially on our doorstep?

Whether you’re feeling anxious about your portfolio or your pension or you couldn’t give two hoots about it is up to you.

I’m not here to say what should matter to you.

If you think it’s distasteful to write, as I did a few weeks ago, of the likely unintended consequences of shutting down the economy – including plenty of bad non-virus related health outcomes, incidentally – and you’d prefer to read another social media post demanding someone do something, anything, then by all means go read those instead.

We’ll still be here when you get back.

Monevator will keep writing about personal finance, investing, and the economy in the weeks and months ahead. This will be our overwhelming focus.

If you think that’s wrong and our site should be turned over to a daily roll call of the dead then please do take a break for a while.

I honestly wouldn’t blame you. There are many things far more important than money, and your loved ones are top of the list.

By all means ignore the financial aspect of your life for the next six months. If you can afford to do so then it may well be the best thing for you. There’s more than enough else to worry about.

But discussing personal finances, investing, and the economy is what we do.

We’re just a couple of guys working on this website in our spare time, and 99.99% of the world couldn’t care less what we write about even in the good times.

But some people have generously told us over the years that we’ve made a difference to their financial lives. That matters to us.

I don’t think a reader fretting about their finances and turning up at Monevator to find our last post was a ‘Good Night and God Bless’ from February on account of the virus would do anybody any good.

So we’ll keep on doing what we do, writing about money and investing, for anyone who wants or needs our site, for whenever you’re ready to read us.