Is investing a zero sum game?

One problem with writing an educational sort of blog is you never know who you’re talking to.

The same is true with a book or a movie, but the difference with blogging is a reader usually pops up right in the middle of things, having been sent to some article on the whim of Google.

It all presents some challenges, including the one I am going to discuss today, which is how to answer the question: “Is investing a zero sum game?”

On the one hand, I might be talking to someone steeped in years of active fund propaganda, who genuinely believes it’s smart to pay up for a portfolio of actively managed funds because they think that clever active fund managers who work hard will obviously beat a dumb ‘buy everything’ strategy.

To these people, we need to explain that while it’s certainly true that many active funds will beat the market in any given year, it’s impossible for a majority of actively managed money to do so, and also that vanishingly few funds have long-term records of outperformance. (Just 1% or so, according to some studies. Good luck picking them in advance!)

On the other hand, we might be visited by a new investor who wants a better return than from cash, but who has got the impression from movies and newspapers that the stock market is a winner-takes-all casino – that it’s like playing poker against Gordon Gecko and The Wolf of Wall Street.

To these people we need to explain that passively investing in equities gives you a stake in the growth and output of productive business.

Investing need not have anything to do with trying to pick winners or with regularly making bets – trades – unless you want it to.

For instance, if the UK’s FTSE 100 index of the top 100 largest companies goes up 10% this year and pays out 4% in dividends, then the market return would be 14% for the year.

You can get the vast majority of this return by owning a cheap passive fund that tracks the index (with a little bit deducted for the costs of running the fund).

Let’s say you own an active fund that delivers an 18% return by investing in a superior selection of FTSE 100 companies in the same year the UK market goes up 14%.

On the other hand, if your active investing does worse than the market, then the return reduction is sometimes called ‘negative alpha’.

Let’s say another active fund you own achieves 10% in the same year.

In this case, the alpha is negative 4.0 – this time the fund manager’s decisions (and/or costs) reduced the return you got from the market (beta) by 4%.

(Note: I am necessarily simplifying here for brevity. In particular I am ignoring risk. We’ll look at that more deeply in a future article.)

Alpha, beta, and beating the market

While introducing Greek isn’t usually a recipe for clarity (there’s only so many Popadopolouses that an Anglo-Saxon mind can process) in this case I think it’s worthwhile in attempting to explaining what investing is, and what it isn’t.

Because what we’re really talking about when it comes to the zero sum game question is alpha, not beta.

As I say, you can get beta from a tracker fund, or via the market-mirroring elements of an actively managed portfolio.

But where does alpha come from?

At someone else’s expense, that’s where.

What is a zero sum game?

Let’s go back to first principles. Wikipedia describes a zero sum game as:

…a mathematical representation of a situation in which a participant’s gain (or loss) of utility is exactly balanced by the losses (or gains) of the utility of the other participant(s).

If the total gains of the participants are added up and the total losses are subtracted, they will sum to zero.

Luckily the author swiftly appeals to our stomachs:

Cutting a cake, where taking a larger piece reduces the amount of cake available for others, is a zero-sum game if all participants value each unit of cake equally

There’s only so many pieces of cake to go around. If eight of us divide a cake into eight pieces and you swiftly gobble down two pieces, then someone will go without cake.

Is investing a zero sum game?

A lot of people have the impression that investing in equities (shares) is a zero-sum game.

They hear about Wall Street and the City of London’s winner-takes-all mentality, and they think investing must be like a poker game.

In typical poker games, everyone brings the same wodge of cash to play. As they win and lose their money, it is redistributed around the table between the players.

Often players bow out of the game when they run out of money, leaving fewer players to compete for that same total ‘pot’ in circulation. Often one player goes home with everything – that is, they take home all the money the players together brought to the table.

Poker is a zero sum game. You win money by taking it from someone else.

And that is is not necessarily what happens when you invest in equities.

Equities are small slivers of ownership of companies.

To simplify for the sake of today’s discussion, in any particular year a single company may do badly or do well, but over the long-term you would expect companies as a whole – the ‘market’ – to grow their earnings as the economy expands and companies become more productive, and also because inflation boosts their sales numbers in nominal terms.

This is the reason why stock market indices – a measure of the value of all the companies listed in a particular stock market – have overwhelmingly tended to increase in value over the long-term, provided those markets haven’t been struck down by hyper-inflation or a communist revolution.

For example, the following graph shows how the total value of stock market listed US companies has increased in real terms over the past century or so – i.e. even after backing out the illusory growth from inflation: 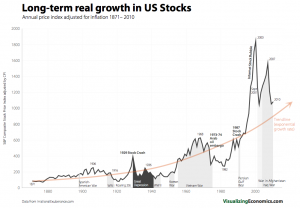 The black line rises as US companies have collectively become more valuable, although the spikes and troughs show it hasn’t been a smooth ride.

Sometimes people get carried away and pay too much for companies. Sometimes they are frightened and prices plunge.

This kind of volatility is another reason why some people think investing in equities is like gambling, incidentally. Over the short-term, luck does play more of a factor as a consequence of these gyrations.

But over the long-term, the growth in value is clear.

In addition, as well as this rise in the long-term value of their shares, investors in equities also benefit from dividends – regular payouts of cash.

You can see in the following graph that reinvesting dividends (the green line) makes an enormous difference to long-term returns, as well as dampening down that short-term volatility. 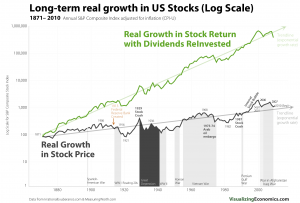 As an investor in equities then, you expect to benefit from the growth in the value of your shareholdings, and also from receiving those regular cash dividends.

This is because you own stakes in businesses. It’s exactly the same as if you owned a pub or an ice-cream van or a buy-to-let property. You are making your money by investing in productive businesses, not by trading or gambling.

Earning a beta return from the stock market

A quick look at the long-term record shows that the UK stock market has delivered an annualized real1 return better than 5% over the past 100 years or so.

Now, this does not mean you are guaranteed to get a 5% real return in the next 12 months from the UK stock market – as we saw in the graphs above, in the short-term anything can happen.

But it does mean that over the long-term – say 30 years of saving for a pension – then if history is a guide you might expect an annualized 5% real return from UK shares.2

If you own the market (via a tracker fund) then you will get the market return.

You can hopefully see therefore that investing in equities via an index tracker fund is not a zero sum game.

All investors in the UK market in aggregate can expect that long-term 5% annual real return3, before costs, provided the economy keeps growing and stock market listed companies get their share of that growth and the investors are invested in such a way as to capture the return from the market (the beta).

Reminder: A cheap and easy way to capture the return from the stock market (minus modest costs) is via passive investing in index funds.

The confusion arises because active investing is a zero sum game when it comes to trying to beat the market.4

To learn why read the follow-up post: Is active investing a zero sum game?

Next post: Weekend reading: Volatility and the Swiss swoon