The long con is the most dangerous kind of confidence trick. It’s not nice to lose a tenner to a street hustler or even £500 to a door-to-door swindler, but the long con – the swindle that runs for weeks, months, or even years – can be a much more deceptive and fatal affair.

The long con – where you’re played as a mug by a whole crew of rip-off merchants – is how you lose thousands of pounds. It’s the stuff of boiler room scams that steal your nest egg, agents who sell you a house they don’t own, maybe even a spouse who only wanted you for your ISAs.

In the hands of truly gifted grifters, you might even reach the end of a long con without realising you’ve been the victim of a scam at all.

Is the active fund management industry a long con?

To be clear, I’m not talking about frauds like Bernie Madoff, or even foul-ups like the split cap trust debacle, the Equitable Life scandal, or sub-prime mortgages, dubiously sliced and diced debts, and dodgy ratings agencies.

I just mean the everyday business of managing our money and charging for it.

The con is on

Most investment bankers, fund managers, or others in the City are definitely not crooks. Far from it – I think they’re overwhelmingly law-abiding citizens and upstanding members of the community.

(A cynic might say they’ve every reason to uphold the Law of the Land, given their place near the top of the tree!)

But much of financial services does look like a giant machine designed to skim billions off a mass-market of oblivious mug punters.

As for the elite, they can give their money to hedge funds and get fleeced in style.

Well, we know that the majority of active funds do not beat the market.

All the data shows that. Yet we also know the total weight of money in active funds still greatly outweighs the money in passive funds.

Therefore most private investors are paying for a service that doesn’t deliver what it promises.

They are paying much more than they would if they’d invested passively via the cheapest intermediaries, and simply accepted the market return, minus low tracker fees.

Here’s the definition of a confidence trick from Wikipedia:

As such, there is no consistent profile of a confidence trick victim; the common factor is simply that the victim relies on the good faith of the con artist.

Victims of investment scams tend to show an incautious level of greed and gullibility, and many con artists target the elderly, but even alert and educated people may be taken in by other forms of confidence trick.

In a traditional confidence trick, the mark is led to believe that he will be able to win money or some other prize by doing some task.

The analogies write themselves.

You’ve got to pick a pocket or two

Now, it’s true you won’t lose your life savings by investing in a portfolio of decent actively managed funds.

Your pension is just likely to be a bit smaller than if you’d gone passive.

Even if you do the maths and discover just how much of your return you potentially give up in paying the costs of active management, your final nest egg probably won’t look too bad, thanks to compound interest.

Indeed the genius of the operation is that rather than financially ruining you by taking you for all you’ve got and then quitting town overnight, active fund management fleeces us for a couple of per cent each year, every year.

But when you add up all the proceeds, you end up with one great tithe on our savings.

Here’s John Bogle, the father of the index fund, on the subject:

“The function of the securities markets is to allow new capital to be directed to its highest and best use.

That’s true, but think about the maths for a minute.

We probably have about $300 billion a year that goes to new and additional offerings.

We trade $56 trillion, and that means something like 99.5% of what we do as investors is trade with one another. And 0.5% is directing capital to new business.

There is a system that has failed society. Period.”

That’s a powerful argument, though I do think Bogle over-eggs the pudding.

For starters, a certain amount of trading is required to have a liquid secondary market in shares. Without that, nobody would put fresh money into newly-listed companies in the first place.

Equally, some measure of trading is required for us to have efficient markets, although nobody knows how much. In the video below, Sensible Investing cites ‘academic consensus’ that a global fund industry of 20% the size of today’s would be sufficient, but I have no idea how reliable that figure is.

But plenty smaller, I’m sure.

This graph from The Economist from back when people were worried about how vast the financial services industry had become – you know, 2009 – reveals a part of the reason why the rich got so much richer in the past few decades.

Financial services swallowed up an ever-increasing share of GDP: 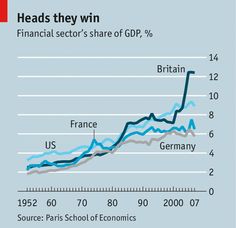 Did we ever need so many people shuffling money about for a productive planet?

Or did they perhaps – like the infamous bank robber Jesse James – go where the money is?

Some of the increase in GDP share for financial services may be warranted. It might for instance represent the more sophisticated allocation of capital towards higher return investments, with a decent pay-off for our economies and for society. Greater leverage will play a role, too.

Another chunk of it is the West being the banker for the faster-growing wider world, which is a boon for cities like London.

Still, it’s hard to believe we need Wall Street to make the $26.7 billion in bonuses it clocked up in the year to March.

And it’s hard to believe the many billions spent in the UK on the zero-sum game of active fund management – £18.5 billion of it in hidden charges, according to the True and Fair Campaign – isn’t many billions bigger than it needs to be.

I admit fund management is probably grand fun – I’d imagine I’d love running an active fund – but as I used to rant about bankers before I started feeling sorry for them, wouldn’t it be better if our brightest were curing cancer or solving global warming?

This final video from Sensible Investing TV has plenty more thoughts on the subject:

Ultimately, I think the fund management industry prospers because its practitioners really seem to believe what they’re saying.

Their belief in the face of all that contrary evidence is what makes the whole rigmarole so authentic.

The Fisher king of active management

“One view regularly rendered by supposedly learned finance experts is a tell-tale tip that the deliverers of the following drivel are communists at heart, disbelieve in markets and will surely rot in hell.

It’s simply the leap from the (quite true) observation that active money managers as a group lag passive management returns to the conclusion that active fees must fall from current levels. Finance professors say it, as do journalists and consultants. They’re all wrong.

How long should prices take to fall if you believe in capitalism and market mechanisms?

Surely not the 30 years that active management has publicly lagged behind passive? Those who claim that prices must fall obviously have no faith in markets and competition.

Commies at heart, headed for that above-mentioned hell thing.”

That sounds to me like a man jumping through hoops to believe the unbelievable.

Now, I happen to enjoy the writings of Ken Fisher. I own and enjoyed his myth-busting book, Debunkery

Fisher is typically candid and entertaining, and the piece from the FT quoted above pulls no punches.

He freely admits passive investing beats active investing in aggregate, and I admire how he discloses he’s a “richer than filth” owner of an active fund management firm, too.

However as a defence of active management, his article represents something of a new stretch for the final, flimsy straws of justification.

When not condemning the likes of Monevator to burn in hell for our supposedly communist tendencies, he makes a heroic leap of faith that only a truly believer could ever manage in claiming that active management fees are higher because:

Does anybody out there think this statement is correct?

I do agree with Fisher’s further argument that behavioural flaws – our tendency to buy high and sell low – is as much a threat to long-term returns as fees.

So I can see his argument could justify the cost of a skilled independent financial adviser managing a portfolio of passive funds, though you’d need to have a lot of money invested to get to the point where it would be economical for the adviser to call you up and talk you down off the ledge in a bear market.

But what does that have to do with active funds? Or with getting mailed an active fund’s report every six months that spends dozens of pages trying to obfuscate the fact that you would probably do better long-term if you went passive?

Fisher genuinely seems to believe people are paying higher fees because they are rationally gravitating towards this alleged higher service.

I think they’re paying higher fees because they’re ignorant of the maths, and because passive investing feels so wrong. More people now know better – and passive is gaining market share every year – but the race is not yet done.

Also, the irony of an active fund manager arguing ‘the price is right because the price is always right unless you’re a communist’ is, well, priceless.

Is that how you gee up active fund managers in their Monday morning meetings?

I get the appeal of trying to beat the market, I really I do. I’m an active investor myself, though I invest directly in shares rather than using a fund manager.

I would never tell somebody they shouldn’t try to do the same if they fancy the challenge – provided they’re aware of the risks and the high likelihood of failure.

But an industry of thousands of expensive fund managers bankrolled by a nation of savers paying billions upon billions over the odds for a service that mathematically cannot in aggregate justify what it charges them?

If it didn’t already exist, it’d seem pretty audacious to think you could pull it off.

As the physicist Richard Feynman once said:

“The first principle is that you must not fool yourself, and you are the easiest person to fool.”

If you’re in a con game and you don’t know who the mark is… you’re the mark.

Check out the rest of the videos in this series.

Previous post: How to invest in the low volatility premium