Never ever respond to a cold call 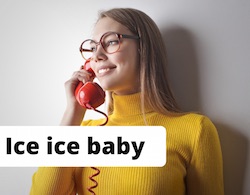 Whenever you receive a cold call, an unsolicited marketing email, or an offer from a company you’ve never done business with – hang up, delete it, or throw it in the bin.

This strategy will save you from the majority of frauds. It will also improve your life.

I’m sorry if your job is to cold call strangers to tell them about genuine investment opportunities. Or charity drives. Or alumni fund raises.

These things do exist.

But life is simpler and safer if you presume they don’t.

As an on/off fan of Radio 4’s Moneybox over the years, I’ve heard about far more scams, frauds, hucksterism, and shysters than I’ve seen in real-life.

And most – close to all – the schemes that undo the victims start with a cold call. Or a knock at the door. Very occasionally a supposedly random meeting (say with a timeshare pitch at a holiday resort).

Here’s a typical example from Which?:

‘A man phoned and said he was from TD Global. He rattled off a shortlist of familiar-sounding firms and offered to send me an email and prospectus. He said he’d call again in a week, which put me at ease, as scammers try to rush you. The email linked to a professional website. I checked the FCA register and saw TD Global is regulated.’

Robert later discovered that the very convincing website – tdglobalfinance. co. uk – was a clone. Unhelpfully, the real company has no website listed on the FCA register so nothing seemed awry when he checked this.

Robert ended up transferring money in batches, both over the telephone and at his local Halifax branch. He was taken through security in a private room at the bank, during which he explained he was investing in TD Global and showed staff the ‘invoice’ he had been sent.

He was handed a scams pamphlet and warned about cold calls, but no alarms were raised. An FCA warning about a clone of TD Global Finance appeared shortly after the final transfer to the fraudsters.

Horrified, he immediately told the police and his bank. Halifax returned £30,000 but refused to reimburse the rest, stating that Robert had ‘failed to make sufficient checks’ before investing.

Why would anyone respond to a cold call when there are dozens of legitimate investing platforms a mouse click away?

Why would someone think they were being pitched an incredible investment opportunity by a total stranger?

It’s easy to mock or despair at such victims.

But firstly, let’s remember they are just that – victims. They’ve been done over by crooks who prey on the better aspects of our nature, such as trust. Victims deserve our sympathy.

Also, scams happen so often there’s obviously something else going on.

Sure, many of the victims are in the vulnerable elder who is out of their depth category. People who rip them off are morally bankrupt pond detritus. (They should really be working in the City – badoom tish!)

But I’ve noticed many of the victims that we hear about seem to be retired company directors or other high-flyers.

Partly that’s because they have the money to steal, no doubt.

But I suspect it’s also because in their professional life such people were used to being pitched by suppliers, vendors, and other industry sorts.

So a cold call for them doesn’t trigger the alarm bells that it would for me.

(In my case, picture a klaxon wailing and blue and red lights flashing in an underground bunker at the merest hint of a butt-dial.)

Smart and accomplished people can be prone to over-confidence, too. They may even be experienced in evaluating investments and other opportunities.

But such experience counts for nowt when you’re assessing a scam as if it’s legitimate.

Brains isn’t enough to avoid scams. One recent survey found that 62% of investment fraud victims had a four-year or longer college education.

And blowing the ‘poor grannie’ stereotype out of the water – at least when it comes to the targets of investment scammers – 81% were male. Men have a proven tendency to be over-confident compared to women.

That same survey also found nearly 60% of the victims received at least one investment cold call a month.

Is it any wonder that eventually a scammer got through?

Baby it’s a cold call outside

You might still be thinking that you can tell a fraud from a legitimate pitch.

Or that you’ll know a boiler room con or a scripted scam when you hear it.

Maybe you work for the police or MI5, or you’re a fraudster who can sniff out a fraudster.

So sure, maybe you can tell a dodgy cold call from a real sales approach.

But why bother? What’s in it for you or me?

I’m an investing junkie who has read countless money and investing books.

I can’t remember a single one where a person got rich because someone cold called them on Saturday afternoon to take up five minutes of their (oh they understand!) precious time.

Don’t bother. Hang up on as soon as you know you don’t know them.

Thank you! Goodbye. Hang up.

If this isn’t already your policy when you get a cold call then this might just be the most valuable article you’ll ever read on Monevator.

Next post: Weekend reading: A post-Covid return to normality or time to rethink it?