A brief* guide to the point of bonds

Bonds, huh! Yeah. What are they good for? Absolutely nuth– hang on, that’s not quite right.

Despite the exciting Bond Crash Apocalypse Now scenarios available from your local financial media outlet or multiplex cinema, bonds still have a place in the portfolio of any investor whose risk profile questionnaire doesn’t bear the name “Indiana Jones”.

Below I’m going to trot through the main kinds of bonds and quickly sketch out the part they each have to play in a diversified portfolio.1

But before I do, it’s worth remembering that bonds are meant to be the counter-weight to shares in a portfolio. They are the stabilising influence that tempers the turbulence. Equities are from Mars and bonds are from Venus, if you will.

The cost of these benefits of bonds is a much lower expected return than equities (though things don’t always turn out that way) and, in most cases, a vulnerability to inflation.

Here’s a couple of other bond basics that will help make sense of what’s to come in the rest of this article:

Maturity refers to the length of time (usually years) before the issuer must pay back the loan that the bond represents.

The longer a bond’s maturity, the more risky it is. That’s because there’s a greater chance it will fall prey to rising interest rates and inflation.

The duration of a bond tells us two things:

1. The impact of changing interest rates on a bond. For example, a bond with a duration of seven years will lose around 7% of its market value for every 1% rise in interest rates. Equally if rates fell by 1% then the bond would gain 7%.

2. How long it will take for a bond to recover its original value as its interest payments are reinvested at a higher rate. If you hold a duration seven bond for seven years then you won’t lose your original stake.

Bonds or bond funds? Most of the characteristics described below apply equally well to individual bonds or bond funds. If in doubt, assume I’m talking about bond tracker funds and ETFs, as they are the simplest, most cost-effective way for most investors to hold fixed income assets.

Here’s a handy new-fangled infographic that lays out the bond landscape: 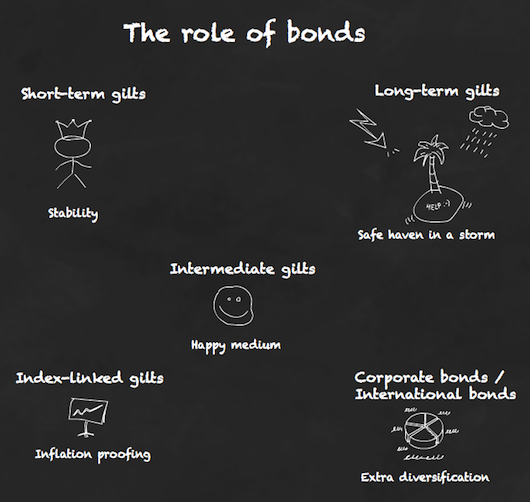 If you are haunted by fears of spiraling interest rates then short-term gilts are the place to be.

Short-term gilt funds hold conventional3 UK government bonds that are due to mature in 0-5 years, which means:

Who for: If you’re vulnerable to interest rate hikes, have a high fixed-income allocation, and have little need for growth then short-term gilt funds are for you (although please remember as always we’re advocating a portfolio approach with your bonds and other asset classes, not all or nothing).

This is the regular coke choice of government bond funds. It holds conventional gilts: short, long and everything in between to end up in the risk/reward sweet spot for fixed income.

Intermediates are a good choice because:

How to recognise: An intermediate fund won’t call itself intermediate. It will have a very plain name: UK Gilts fund or UK Government Bond fund with no mention of any kind of timescale. Look out for an average duration of nine to 10 years in the fund factsheet.

You’re into long-maturity gilt funds because you fear deflation. Long bond funds are chock full of conventional gilts with maturities of 20 years and well beyond.

Who for: Young investors with 80% plus equity allocations and reasonably stable jobs have the most reason to fear deflation. The increased volatility of long bonds is barely relevant in such an aggressive portfolio.

However, long bonds are currently considered to be extremely risky given the widespread expectation that interest rates will eventually bob back to their historic norms. Under the circumstances, intermediate bonds can fulfill much the same role but will take less of a beating if rates do rise.

Economic Cassandras sometimes snicker that Western governments have no intention of ever paying off their mountainous debts. The existence of perpetual bonds is this cynicism incarnate.

‘Consols’ are a special kind of gilt issued in the distant past by the UK government that look set to pay a fixed amount of income forever. Other similar bonds include “War Loan”, which was issued in 1917 to encourage patriotic citizens to help pay for World War 1.

In theory these bonds are redeemable by a determined administration, but in practice nobody expects this to happen any time soon – where “soon” means in our lifetimes, or your grand children’s lifetime for that matter.

The origins of consols dates back to the 1700s. Their value – and hence what the government owes on them in real terms – has been utterly destroyed by the higher inflation of the 20th Century, and they now amount to a tiny proportion of the nation’s loan stock.

So while buying something that pays you an income for the rest of your life might seem akin to a perpetual motion machine, there are snags  – principally caused by inflation and the time value of money.

Who for: Doomster deflationists. Arguably they could in some other reality have a role for ordinary investors in providing steady income, but we think not at anything like today’s prices – we’d have to turn Japanese and see decades of deflation for them to be attractive. A long-dated gilt fund does a better and cheaper job at protecting against that risk for passive investors.

Here both the principal and the interest component of the bond rises and falls in line with the retail price index (RPI) measure of inflation. Plus you get a smidge more yield on top.

Inflation is the great nemesis of bonds, which makes linkers extremely useful. Indeed they are so popular in the current environment that some are priced to deliver a negative yield. In other words, you’ll pay through the nose for the safety features.

Why else should you not commit your entire bond allocation to linkers? There are a few reasons:

Who for? Everybody! But it’s not a good idea to place all your fixed income bets on linkers. Rampant inflation is not the only fruit.

Corporate bonds are debt issued by companies instead of governments. They yield more than gilts because companies have an unfortunate propensity to go bust and not pay back their debt. Hence corporates offer a risk premium to compensate for the possibility of this happening, compared to the low odds of the UK government not paying up.

They’ve become popular of late as investors – who mistakenly think of bonds as blanket “safe” – scratch around for anything that seems similar to a gilt yet mysteriously offers a higher return. (The London Stock Exchange has even launched a special market to cater for retail bond investors like us).

Debating point: There’s an argument that an international corporate bond fund further diversifies your portfolio, enabling you to increase expected returns without increasing risk. Many American passive investors are in ‘total bond market’ funds that include a 20-25% corporate bond slice.

But personally, I prefer asset classes to play a clearer role in my portfolio: Equities to deliver growth, and domestic government bonds to reduce risk. Corporate bonds do not strictly fulfill the defensive criteria outlined for bonds at the start of this post.

However, there seems little point in devoting a portion of your bond allocation to AAA–AA rated countries that are in the same low yield boat as the UK. You’d be taking on a fair chunk of currency risk in the part of your portfolio that’s meant to offer stability.

Instead, you might consider emerging market government bond trackers that take you into the realm of sub-AA countries. If you go down this route, make sure you diversify as much as possible across countries, maturities, and currencies.

As with corporate bonds, you can expect a choppier ride from emerging market bonds. It’s probably best to carve their allocation from the equity wedge of your portfolio, rather than the low risk, fixed interest side.

So there we have it. If you can handle equities see-sawing like Chucky after a rejection letter then bonds may be optional for you.

If not, then they have a place in your diversified portfolio regardless of the widespread conviction that interest rates must rise and that bonds will take a shoeing for a time.

Fancy grabbing some? Here’s Monevator’s take of the cheapest trackers around, including some cost-effective ways to get exposure to bonds.

*Editor’s note: I think this is called “irony”, but check with Alanis Morissette.