No lost decade: Why we’re not Japan 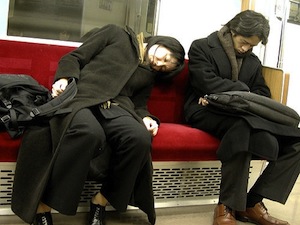 One of the mantras of those gloomy about Western economies is that we face a lost decade like that suffered by Japan.

In fact, Japan endured more than one lost decade, going on the performance of the Nikkei stock market.

But Japan’s lost decade wasn’t just about stocks. Economic growth came to a near-standstill in the 1990s. Worst of all, with house prices slumping, Japanese firms retrenching and personal consumption evaporating, Japan entered a deflationary spiral – despite near-0% interest rates.

With US and UK interest rates now hovering barely above zero and a convincing economic recovery still not apparent – especially in the US, which has a persistent unemployment problem – the doomsters see parallels with Japan in the late 1980s:

These things keep investing refuseniks up at night, counting their gold coins, shotgun cartridges, and cans of baked beans.

While there are echoes of our predicament in the Japan of 20 years ago, I personally sleep well and don’t expect a lost decade either here or in the US.

That’s because I see more differences then similarities with Japan.

In contrast, like stalkers looking for signs of love in a restraining order, the Lost Decade obsessives ignore evidence that contradicts their thesis.

The reality is that our cultures, economies, and our response to the financial crisis have been very different in the US and UK, compared to Japan.

Perhaps the biggest reason for my optimism is I see very little chance of deflation taking root in the West.

The Japanese were once notoriously high savers. Just look at the following graph from Investor Insight:

Japan is a savings-driven culture, even today. Back in the 1980s, credit card debt was unheard of, and 20-somethings stayed at home for years to save a deposit for their super-expensive shoebox houses.

If you’ve got a lot of savings tucked away, deflation isn’t so bad. In fact, your money is worth more every year as goods and services become ever cheaper.

Japanese citizens could therefore spend their savings to top up their living standards throughout the lost decade. Terrified of debt – especially after that massive housing crash – even super low interest rates didn’t make the alternative attractive.

Compare that to the US: 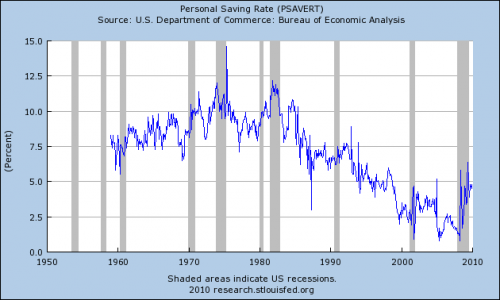 US consumers only really save in economic downturns, as can be seen in the early 1990s, the recession that followed the tech bust, and the big spike upwards in savings in 2009.

While US households in aggregate have financial and housing assets to at least match their liabilities (contrary to the hype) they don’t have – and are not used to having – massive amounts of cash tucked away. Deflation would bite the US hard.

What this suggests to me is that near-0% interest rates – and quantitative easing – will work in the US, and here in the UK where the situation is very similar, because consumers would eventually start borrowing again.

If the authorities print as much money as is needed, we’ll get inflation and escape the deflationary component of Japan’s lost decade. That is half the battle won.

Response to the banking crash

The next difference to appreciate is between Japan’s response to its collapsing asset bubble of the late 1980s, and our own more recent one.

I’m not saying our banks covered themselves in glory before or after the crash, or that the transfer of risk from private companies to the State is without other consequences.

I’m saying these things have happened here, and a heck of a lot faster. So again, we’re different to Japan.

Finally, look at how we’ve responded to the recession in the West, compared to the zombie-like situation of Japanese corporates in the 1990s.

In the Lost Decade, much of what had been lauded in the Japanese economic model turned around to drag it under.

Not the good stuff – Kaizen, automation, and the just-in-time production lines that made Japanese factories the envy of the US rust belt.

Rather the networks of family and corporate cross-holdings, the jobs for life of salarymen, and the extreme desire to save face that also was part of the Japanese economic miracle.

It took a long time for the scale of the crisis to become apparent in Japan, because as I’ve said the banks obfuscated for years, as did politicians.

To be sure we’ve had some of this in the West. Lloyds and RBS survive due to taxpayer support, as does the likes of GM in the US.

But look at the bigger picture. The massive bounceback in corporate profitability and the coincident rise in unemployment in the West is evidence of capitalism working at its ruthless best.

Incidentally, demographics in the US are totally different to Japan, too. Thanks to immigration, the US still has a growing young workforce – yet another critical distinction that the Lost Decade doomsters overlook.

No easy ride, but no Lost Decade

I appreciate this may sound Panglossian to some readers, but it’s really not.

The Japanese experience is near-unique in our experience of capitalist economies. Even today it confounds the economic rules. It’s the exception, not our inevitable fate.

We might well suffer other bad stuff that I don’t expect, such as a double-dip recession or a period of extremely high inflation from our warding off of deflation. Our future standard of living has definitely fallen from where we expected it to be three years ago.

If you want gloomy scenarios, those are much more likely. But to say we’ll go Japanese is really a leap, considering how un-Japanese we were to begin with.

This website uses cookies to improve your experience while you navigate through the website. Out of these, the cookies that are categorized as necessary are stored on your browser as they are essential for the working of basic functionalities of the website. We also use third-party cookies that help us analyze and understand how you use this website. These cookies will be stored in your browser only with your consent. You also have the option to opt-out of these cookies. But opting out of some of these cookies may affect your browsing experience.
Necessary Always Enabled

Any cookies that may not be particularly necessary for the website to function and is used specifically to collect user personal data via analytics, ads, other embedded contents are termed as non-necessary cookies. It is mandatory to procure user consent prior to running these cookies on your website.