Should I dump my government bond funds?

Many passive investors are in a pickle over gilts (or US Treasuries or whatever your domestic government bond might be, if you’re tuning in from outside the UK).

Mechanical asset allocation rules dictate that we must sink a proportion of our savings into government bonds, according to our individual risk tolerance. But aren’t we on a hiding to nothing, as gilt prices have soared and yields dwindled thanks to government manipulation of the market?

It certainly seems so when an investing legend like Warren Buffet comments:

Surely the only way for gilts to go is down as interest rates rebound? Surely some kind of ‘active’ evasive manoeuvre is required? 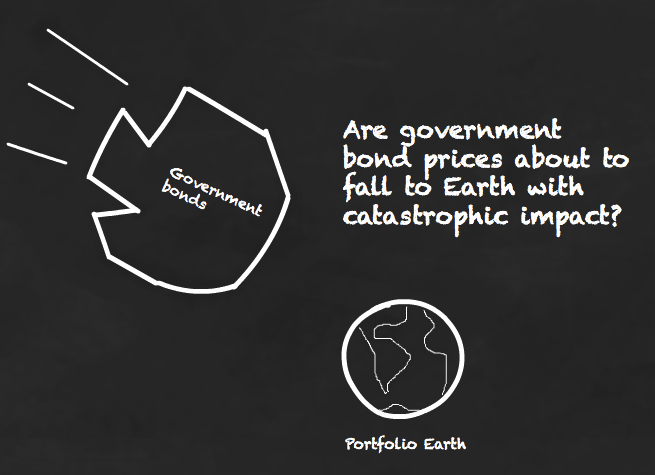 What are gilts for?

Let’s ignore for now the fact that similar fears were widespread a year ago, only for the UK gilt sector to return 15% in 2011 and the index linked gilt sector to weigh in with a 21% rise.

Let’s even assume that this chart-topping performance makes it all the more likely that gilts must drop.

Before leaping into action we need to consider a few questions:

To answer the first question, the role of government bonds for investors who are building their capital is to reduce the risk of underperformance by equities.

The more your portfolio is insulated with gilts, the less violently it should convulse as it’s held to the bare wire of the market.

Hence ‘merely human’ investors are less likely to go panic-sell crazy during market turmoil, and you’re better diversified should equities not live up to their long-term performance billing.

These important protective features of gilts remain true even in the face of the current market situation, and particularly given the economic uncertainty faced by the world.

If we should slip into a Japanese-style economic ice age, your gilt positions will provide a stable source of income and a welcome redoubt against deflation.

And if you pare back your gilt allocation to a point where your portfolio is riskier than you can truly stand, you may well do far more damage to your long-term prospects than you would in that much-feared gilt bear market, if instead equities fall, your nerve snaps, and you belatedly sell your shares at low prices.

This is because bear markets in bonds are generally pretty tame in comparison to equity nose-dives.

How bad can the losses be?

Better still, gilt funds1 come with an in-built recovery mechanism. As the price declines, yields rise, so as your bonds mature they can be reinvested for a lower price into new gilts that pay higher levels of interest.

As Vanguard2 points out, this mechanism eventually works in our favour:

Over the long term it’s interest income – and the reinvestment of that income – that accounts for the largest portion of total returns for many bond funds. The impact of price fluctuations can be more than offset by staying invested and reinvesting income, even if the future is similar to the rising rate environment of the 1970s and early 1980s.

Duration is the key characteristic on your gilt fund factsheet that shows how badly it will be affected by a rise in interest rates and long it will take to recover.

For example, if a gilt fund has an average duration of 7 years then it will lose (or gain) approximately 7% of its net asset value (NAV) for every 1% rise (or fall) in interest rates.

A duration of 7 also means that the fund will recover its original value within seven years as higher interest payments compensate for falls in price (though the recovery can be faster in practice).

What action can I take?

One thing you can do, therefore, is to make sure you only invest in gilt funds with a duration that’s no longer than your time horizon. That way you can’t suffer a capital loss on your portfolio’s gilt allocation.

And if you’re strapping in for the long term then you can take comfort from the fact that you’re likely to be able to ride out sharp rises in interest rates.

Interestingly, though a rapid rise in interest rates would seem to be a nightmare scenario for bond investors, the Vanguard study I quoted above found it actually delivered the highest expected return over 10-years (in simulations upon intermediate holdings of US Treasuries) in comparison to scenarios that are more bond-friendly in the short-term.

But if such reassurance is not enough to stay your hand, then it is possible to maintain your allocation to defensive assets while reducing your exposure to a price drop (otherwise known as maturity risk).

You can do this by increasing your allocation to shorter-dated gilt funds at the expense of longer dated funds.

The table below shows what kind of difference that would make in terms of duration, using some example UK-listed gilt funds:

If interest rates rise by 1% then the iShares ETF’s duration reveals that it will only lose 2.57% of its value in comparison to a 9.5% loss for the Vanguard intermediate fund.

But if interest rates fail to budge, we can see from the yield-to-maturity that the short-term fund will pull in less than a third of the income of its intermediate rival.

If you’re more worried about volatility than long-term returns, a shift of this kind could make sense – particularly if you already have a high allocation to fixed-income.

Another way to trim your exposure to maturity risk would be to increase your allocation to cash.

The best instant access bank accounts yield 3% and you can get a two-year fix at 4%. That’s considerably better than the current yield on gilts, your portfolio will be less volatile, and there’s no risk of a capital loss.

As ever, the risk with cash is that it has delivered the worst historical return over the long-term and is highly susceptible to inflation.

The elephant in the room for passive investors is that once you start trying to outsmart the market, how will you know when to stop?

Interest rate forecasts are a total lottery. After the credit crunch, it was widely predicted that interest rates would rise in 2010, then 2011, and now 2013. I’ve seen commentary that predicts a flatline until 2015.

Once rates do rise, when will be the right time to get back into gilts? Will you be able to do it when equities are crackling like a fried egg in Death Valley? Or will you be too busy diving in and out of gold?

If you’re a long-term investor, you shouldn’t dump your gilt funds. Historically, they’ve always been a drag on a portfolio, but they’re not there to boost returns. Gilts are there to diversify risk.

If your risk tolerance hasn’t changed, then your allocation to gilts shouldn’t change either.

Next post: The cyclically-adjusted P/E ratio (PE10 or Shiller PE)