How it feels to be mortgage-free

I hit the halfway mark of my mortgage-free marathon a couple of years ago, and I hit the wall at the same time. The journey seemed endless and morale was low.

I wrote a post as a form of self-help and discovered a cache of Monevator readers who cheered me up and along with their inspirational comments.

This intervention from Ermine, in particular, gave me heart:

The good news is it’s on the up from now – the last half of goals like that go quickly, as the initial investment starts to pay returns. As my mortgage dropped, I could pay increasing amounts of what was left, which rocketed in the second half.

The really good news is: he was right.

Thanks to a strong wind from the equity market, and merciless saving, we’ve1 hit the magic number two years early.

I now own as much as I owe and all that remains is to hand over the loot to the bank. No longer will they be able to invite themselves round for a ‘chat’ if I can’t keep the payments up. 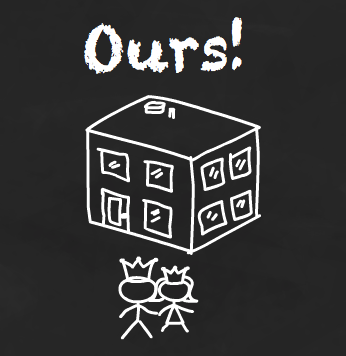 A funny thing happened on the way to the bank

When I became effectively free of the mortgage, the weirdest feeling was that I didn’t feel anything at all.

A smile and a hug with Ms Accumulator, a couple of “I’ve done it” emails to close friends.

I tried to mark the occasion. After all the effort, I mounted my own winner’s podium to greet the applause of my super-ego and… *clunk*… nothing… silence.

Am I broken? Sterile? An emotional Sahara?

No. As grief can be delayed, so can gratification. It may have been re-routed by my emotional sat-nav but happiness has arrived, just not in the guise I expected.

Because the game is far from won. Paying off the mortgage was only the qualifying round. Financial independence is my Olympic Final.

I couldn’t think about competing for that until I’d bested my debt.

Now I know I can do it. I showed the discipline, stamina, and resolve to hold on during the impossible years. I can face down consumerism and resist the urge to buy a pint of fast-acting pleasure here and a box of cheery moments there.

Better still, I know it’s worth it. I haven’t missed out. Because everyone who’s been there before me and told me it’s one of the best things they’ve ever done – they were right.

I feel like Houdini at the moment he gets an arm free. I may still be in the barrel heading over the Niagara but I can feel the chains slipping off and there’s still time.

Financial independence is a bigger challenge than paying off the mortgage. But I don’t think it will be as hard.

Because this time I have self-belief. Because I’m mentally in the right place. Because my value system is calibrated for freedom not fashion. Frugality is my ally, not an ailment. And with the mortgage done I can focus all my firepower on one goal: F.I. – Financial independence.

I can see it and I want it.

Next post: Why a higher P/E ratio for the market could lead to higher returns