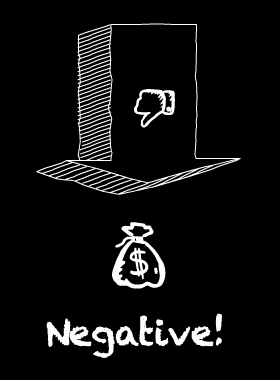 Would you pay a bank to store your money in their laser-guarded vaults? Ideally not, but that’s the reality for some as negative interest rates have spread from Japan to take hold in Europe – and now lap the shores of the UK.

What are negative interest rates?

Negative interest rates mean that a central bank has cut one of its main interest rates below 0%. Instead of the central bank paying interest to commercial banks, the relationship is turned upside down and now those banks must pay a charge to keep their cash on deposit. The idea is to force commercial banks to loan out money and stimulate the wider economy instead of hoarding cash when a major recession looms.

When faced with negative rates, a bank is theoretically better off making even a 0% loan rather than losing money on cash stashed with the central bank.

Needless to say, negative interest rates are a bad sign – a desperate call for all-hands on the money pump when the economy looks like an extra from Dawn Of The Dead.

Negative interest rate policy (NIRP) has also been used by central banks to weaken demand for their currencies in a bid to protect their country’s export industries.

Countries with negative interest rates include:

The main central bank interest rate in the UK is the Bank Of England’s Bank Rate (or Base Rate).

Bank Rate currently clings on to positive territory at 0.1%.

What do negative interest rates mean for savings accounts?

The great fear with negative rates is that you’ll have to pay your bank to park cash with them. That would erode the value of your savings as surely as water wears down soap. You could be better off stuffing your cash into the proverbial mattress.

And indeed this appears to have happened.

There are reports of German customers putting physical notes in home safes and bank vaults as an alternative to paying charges on deposits of more than €100,000. Physical storage spares customers the charge they’d incur if their money was lodged with the ECB.

As you can imagine, business customers are hit by this, too. It’s hard for a law-abiding small business to make their cash magically disappear.

A case for cash? Negative interest rates would be easier to impose more widely on a cashless society because its citizens wouldn’t have the option to divert notes from the maw of a negative rate account to a box in their basement instead. Could the spectre of negative interest slow down the adoption of payment apps? At least we wouldn’t have to worry so much about grandad not being able to buy groceries because he never remembers to charge the smartphone he doesn’t know he has.

Imposing negative interest rates on wider swathes of society isn’t inevitable and is highly charged politically. The outcry in the UK would likely reverberate like the death of Alderaan if we’re ever stung for a percentage of our savings. And imagine the headlines the first time a pensioner’s biscuit tin was stolen – their life savings gone because of some banker’s negative interest rates.

It’s possible for central banks to shield consumers from the pain of sub-zero rates. For example, the ECB doesn’t charge on the first-tier of a bank’s deposits.

The local banking market also matters. Do banks rely on deposits as their chief source of funding? Is there a competitive market that empowers people to switch banks in a mad hunt for a few tenths of a percent of interest? If so banks could be reluctant to put off their customers with negative rates.

Even without negative rates in the UK, savings rates have been slashed as Bank Rate has sunk to just 0.1%.

It’s not hard to imagine a world in which savings earn nothing.

What about mortgages? The dream is a bank would pay you to take its money, you’d buy a Scottish Castle, never pay a penny back, and the debt would melt like a snowman.

But that’s probably not going to happen.

There were some excitable reports that the Danish Jyske Bank had offered the world’s first negative interest rate mortgage. But the less exciting reality was that customers were still paying the bank after it had slapped on various fees.

A few lucky punters thought they’d hit the negative interest mortgage jackpot in the UK in 2009.

They were on two-year tracker mortgages that offered the Bank Rate minus a slice1. But the banks never did pop them a cheque in the post. Instead those blessed borrowers got a 0% interest rate for a short while – which is still free money. On a house!

After that fright, the banks tightened up the small print so that they will never pay you to borrow. Many inserted ‘collars’ that mean your mortgage rate won’t fall below a certain level.

Still, as with saving accounts, you can expect negative interest rates to push mortgage rates downwards. Which sounds great until we start fretting about potential unintended consequences:

The concern has always been that once you start experimenting with NIRP psychedelics you can’t go back to the old normal.

It’s not hard to find authors of articles from the 1990s poking fun at Japanese zero rates like they were Chris Tarrant sneering at the gameshow Endurance.

And yet here we are, with near-zero rates abounding.

It’s easy to understand why central banks have slashed rates around the world.

Their first priority is to stop a biblical recession that would make even Friedrich Hayek blush.

But beyond that, the discourse is ablaze as to whether the habitual use of negative rates is good for anything apart from maiming banks, jeopardising pensions, and distorting markets.

Nobody knows for sure – the experiment is still coursing through our system – but here’s a potted tour of sub-zero anxieties:

Negative interest rates are widely seen as ‘weird’. They unsettle people and seemingly spooked some consumers and corporates in Japan because they believed that such extreme measures signalled that the Bank of Japan knew something awful was coming.

The Bank of England reportedly rejected negative rates during the Global Financial Crisis because it feared they would push tottering banks and building societies into bankruptcy. As if things weren’t bad enough.

One of the lessons of the financial crisis is that we like our banks to be safe and boring. You know – the kind of stuffy old prudentials that maintained massive cash buffers because they’d only lend you money if you were an earl or married to the bank manager’s daughter.

Another sub-zero misgiving then is that negative rates could erode the very cash buffers that are meant to safeguard the system in times of financial stress.

If negative rates squeeze banks’ profit margins to the extent they rein in their lending to consumers and businesses, then would-be easy money policy has gone from stimulating growth to strangling it. Financial nerds call this the ‘reversal rate’. (Because what’s a bit more interest rate jargon when we’re having fun? Or a depression?)

It’s been a while since we’ve heard about our friendly local bank forcing its staff to adopt the kind of high-pressure sales tactics that belong in a boiler room.

Flog a loan, a structured bond, a credit card (would you like PPI with that?) – anything so long as the boss got his bonus.

But the rush to get money off the books in sub-zero Denmark has been blamed for banks pushing risky products onto unsuspecting customers. The regulator called in the police to investigate Danske Bank over the affair.

So much for hygge.

We won’t be paid to swipe our credit cards, buy a Tesla on HP, or to live in our dream house, but negative interest rates are at least meant to make it easier to get the loans to do such things. Reckless lending in NIRP world isn’t so much a moral hazard as a patriotic duty. But the risk of burying the system under a collapsing Jenga tower of bad debt is obvious.

Another source of disquiet since the financial crisis is that easy money just flows straight through our fingers and into assets like equities.2 Instead of stimulating the real economy, the money might exacerbate income inequality, prop up zombie companies, and turn the stock market into a giant Ponzi scheme. Such accusations remain unproven but the dread is only amplified by negative interest rates.

Unfair on savers and pensioners

The effect of negative rates spills over onto savings, bonds, and annuities, with painful implications for those who rely on low-risk returns to maintain their standard of living.

The ECB had to change the rules to prevent Dutch pension funds cutting their payouts, for example, while Swedish insurers have apparently increased their exposure to equity markets in a titanic reach for yield.

Stretching for yield on a personal level is an obvious threat as retirees head into riskier asset classes in a bid for return – think junk bonds, emerging market debt, volatile risk factors, and, god forbid, leveraged products. The danger of people getting in over their heads and panicking if it goes wrong is clear and present.

Most of the central banks who’ve gone negative have done so in part to devalue their currency and increase the competitiveness of their export industries. If other central banks choose to tit-for-tat then we could end up in a beggar-thy-neighbour spiral. That didn’t turn out so well in the 1930s.

Does it even work?

The general narrative is that negative interest rates seem to work in the short-term to ward off deflation and stimulate the economy.

But many argue that sub-zero is addictive and doesn’t facilitate recovery in the long-term.

Only Denmark popped its head back above the zero bound for a few months in 2014 before going back under. Sweden made it back to zero in the first few months of 2020 and then the coronavirus hit.

Most of the dangers listed above were contaminating our financial system long before NIRP. I make no claim to know whether they are really exacerbated by negative interest rates.

Perhaps there wasn’t much choice anyway, but everything I’ve read on the subject suggests you wouldn’t want to start from here.

So do we face the same negative rate future in the UK?

All we have to go on are the gnomic utterances of Bank of England officials. Former governor Mark Carney took sub-zero rates off the table, only for new guv Andrew Bailey to put them firmly back on the table again.

Bailey didn’t sound keen though when he told MPs:

We do not rule things out, as a matter of principle. That would be a foolish thing to do. But that doesn’t mean we rule things in either.

An alternative to negative interest rates is a Keynesian fiscal stimulus that spurs the economy through massive government spending. That looks like it’s actually happening, given borrowing is being thrown into overdrive courtesy of that arch-Keynesian Boris Johnson.

Truly we live in Bizarro World.

The negative interest rates imposed by your smiley bazooka-wielding central bank are not the same as the infamous negative bond yields reported in the financial press.

Bonds inflict a negative yield when their asking price outweighs any remaining interest payments, so that investors suffer a loss on the bond if they hold it to maturity.

Negative real yields occur when inflation is higher than nominal interest rates. For example, a 2% cash deposit pays a real yield of minus 1%, if inflation is 3%. The UK is no stranger to this.

Next post: Walter Schloss: His rules that beat the market