Negative yields on bonds: what do they mean?

There was quite the flurry recently over the UK government selling its first ever negative yield bond. The idea of paying somebody to borrow your money sounds pretty la la and it isn’t going to settle the nerves of many Monevator readers who can’t see why they’d bother with bonds in a zero interest rate world.

Article over? If only.

There are good reasons to hold even negative-yielding bonds – and plenty of myths to bust about negative yields and negative interest rates in general.

So let’s go through the looking glass into a world where things are not as they should be.

What do negative yields mean?

Negative yields do not mean that you periodically wire money back to the government for the privilege of loaning them your dosh.

The UK’s maiden negative conventional government bond goes by the name of 0¾% Treasury Gilt 20231 and £3.8 billion worth of the blighter was auctioned off on 20 May 2020.

In an ordinary world that means you get:

In negative-yielding bond world though, successful bidders paid the government an average price of £102.38 for gilts with a face value of £100. It’s the price they paid that plonks us into negative-yield territory.

If you bought this gilt at auction and then held it for three years – collecting your 75p annual interest along the way – you still only get the £100 face value back on its maturity date. That means you’d see a £2.38 capital loss on the £102.38 bid price. After totting up your interest payments and subtracting your capital loss after three years, it’d turn out that you’d ‘enjoyed’ a -0.003% yield4.

Overall, you’ve got back less than you paid the government to take your money. It’s as if you’re paying them a storage fee or an insurance premium to look after it for you.

Positive news side-story Just because investors were willingly fleeced on one gilt doesn’t mean all UK government bonds are now being auctioned off with negative yields: 4¼% Treasury Stock 2032 made it off the starting blocks the very next day with a positive yield of 0.321%. Lucky investors!

Negative yields on bonds: there’s more than one way to lose money

Don’t worry if you’ve failed to snag a specimen of 0¾% Treasury. There are plenty of other ways to add a negative-yielding bond to your collection.

Of course, you or I aren’t raising a hand or waggling our eyebrows at the DMO’s chief auctioneer when we go gilt shopping. We buy our bonds in the secondary market, courtesy of our brokers or fund managers. And yields have turned negative for gilts in this secondary market, for maturity dates of two to five years away5, according to the FT’s UK yield curve chart.

At the time of writing the FT table showed a top yield of 0.6% for gilts maturing in 30 years. This yield is a nominal number. Subtract expected inflation (perhaps 1.5 to 2%) and we’re still neck deep in negative returns across the bond board.

Flip the chart to Eurozone bonds, and we have negative yields all the way out to the 30-year mark – and that’s before even considering inflation.

Negative yields on bonds: what kind of yield is that?

The yield to look at when comparing bonds is the yield to maturity (YTM).

The YTM is the annualised return you earn on a bond if you hold it until the ‘end-date’ indicated by the bond’s name. It’s the return you can expect from receiving the remaining interest payments and getting the bond’s face value back, after you account for the market price that you paid for it.

Any bond on the secondary market can potentially inflict a negative YTM if you pay a sufficiently high price for its future cashflows.

Imagine a gilt that matures in two years that currently trades on the secondary market at £110:

Pop those particulars into a yield to maturity calculator and it will spit back a -3.8% YTM.

So you’ll lose 3.8% annualised on that (fictitious) bond, at that market price, if you hold it to maturity.

YTM helps you compare bonds that differ by market price, maturity date, and coupon rate. But note that as a bond’s price fluctuates, its YTM will change, too

Why invest in negative yield bonds?

The main reason to invest in a negative-yielding bond is the same reason why we’d invest in any high-quality bond: risk control.

Bond prices go up when yields go down, and nobody knows how low negative yields can go. If you bought in at a negative yield of -0.5%, say, it could slide further to -1% and you may make a handsome capital gain when you need it most – in a crisis: 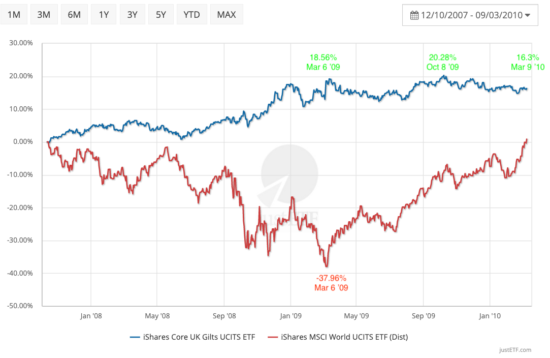 This is the main purpose of bonds: to stabilise our portfolios and stop us panicking when equities plunge. They worked again during the coronavirus crash and are more likely than not to go on working when you need them most. Gilts have played their role as financial parachute in a clear majority of UK downturns for over a century.

UK equities fell -71% in 1973-74. US equities fell by 90% during the Great Depression. You best believe that investors will flee into the arms of negative-yielding bonds if the alternative they see is double-digit losses in the equity markets. The worse the crisis, the more you need high-quality bonds, and the less likely negative yields will be anybody’s foremost concern as they stampede for safety.

Given negative yields are a form of insurance premium paid to the government, today’s prices may even seem cheap in the future – for example if the years to come are dominated by secular stagnation and periodic QE injections aimed at staving off deflation.

I’m not predicting that’s what awaits us – who knows – but it is a plausible scenario. It’s certainly not hard to imagine we could be living in a low-growth world for the next decade or more, given where we are now.

Do interest rates have to go back to normal?

Real interest rates have declined by approximately 1% every 60 years since 1311, according to Yale Professor Paul Schmelzing’s paper Eight Centuries of Global Real Interest Rates. See the chart below.

The secular decline in interest rates over 700 years 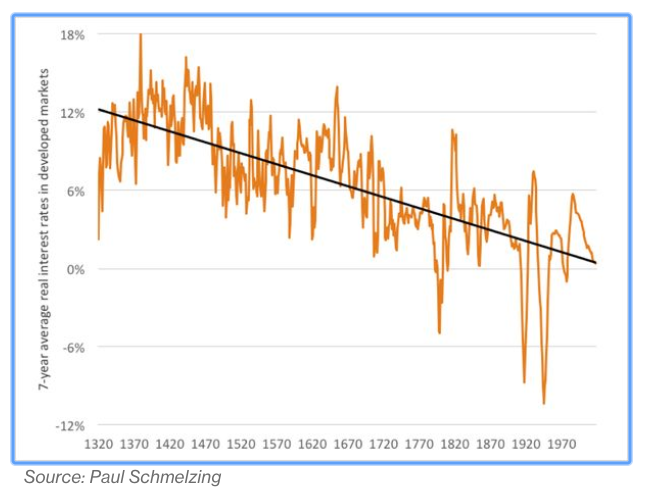 Now that’s a very topline reading of the paper and there are plenty of instances of mean reversion, but you can see in the Schmelzing chart (excerpted by Bloomberg) that the world was no stranger to negative rates in the 20th century, and that the trend line keeps heading down.

Here’s another view: the relentless drop in government bond yields that kicked in from the early ’80s: 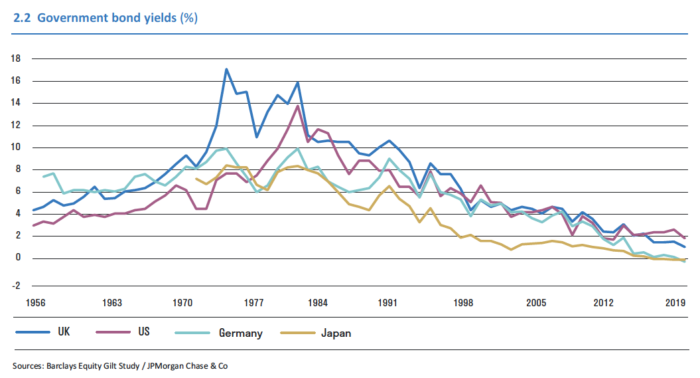 On the other hand, gilt yields climbed for 28 years from 1947-1975. Bond returns would likely be hammered if that experience was repeated over the next few decades.

We can cherry-pick evidence all we like, but the critical point is not to believe that history’s path is already set.

The constant refrain after the GFC was that interest rates would return to normal and that bonds would be beaten with shoes. That didn’t happen.

One reason to buy negative-yielding bonds is because you believe you can make a capital gain later when they go up in price. This is an instance of the greater fool theory: the asset has no long-term positive cashflow expectation and so returns rely on you palming it off for a higher price on some other schmuck in the future.

Gold is a great example of an asset where returns rely on the greater fool because it produces no income. And how many people buy gold but have the fear about negative-yielding bonds?

Some investors are happy to buy negative bonds now because they’re betting on central banks jacking the price as they hoover up bonds shed by government QE programmes.

Another source of demand comes from financial institutions such as pension funds and insurance companies that can’t stop gorging on government bonds because they need them to match future liabilities. They don’t really seem to mind if clients have to pay more in order to get over the pesky negative yield thing.

Bond prices could also be propped up if a future government decided that Austerity II was the way to restore order once the post-lockdown bailout has garnered enough bad headlines. They could snap shut the public purse, and constrict the supply of bonds while demand for safe (-ish) assets remained high.

As a passive investor in bond index funds these aren’t bets I can safely make.

You can also read about any number of profitable trades made on negative-yielding Japanese and Eurozone bonds.

Here’s what I am doing

It’s because I don’t know what will happen that I have to buy bonds – negative yields or not.

Next post: What is behind the coronavirus trading boom?